Heislerville WMA: The best spot in the Lower 48 for Curlew Sandpiper 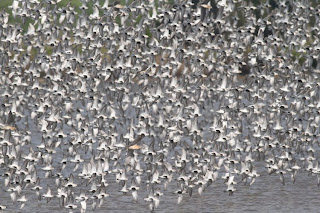 [All pix are copyright by Tony Leukering 2011; click on image(s) to see larger version(s).]

As has been true for the past, well, quite a while, the impoundments at Heislerville WMA in southeastern Cumberland Co. along the lower reaches of the Maurice River are THE place to see shorebirds in the state. Oh, there MIGHT be more birds at some other places like Brig (Forsythe NWR, Atlantic Co.), but there's just no place like Heislerville in the state. Not only can one go there around high tide in May and see 1000s if not 1000s upon 1000s of shorebirds, most of the birds are fairly close and also allow fairly close approach.

But, for many birders, it's not necessarily the spectacle they visit for (though, that's my favorite aspect of the place), it's Curlew Sandpiper. I don't know how many years running that the site has hosted the species, but I know that it's at least four, because I've seen at least one individual of the species there each of the past four Mays. And not only is the species tallied there each year, but multiple individuals are tallied there each year. Though this year's count of at least four might not be the highest tally ever there, this year's showing might be the most interesting due the extreme range of plumage variation shown by the four birds. Though Vince Elia has apparently hogged all sightings of it, there is a spanky adult male in high plumage. There is a bird in virtually full basic -- or basic-like alternate -- that Chris Vogel found quite some time ago. There is what is probably an adult female (below) found a few days ago, but I don't recall by whom. 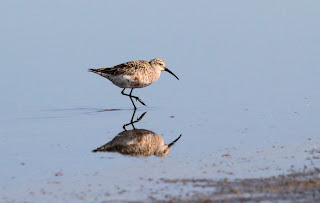 Finally, there is a bird (below) that I found on Wednesday (11th) that is either an immature male or an adult male that is nowhere near as far along in its prealternate molt as is the spanky bird. 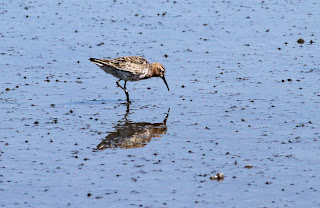 For those searching for the species at the site, pay attention to the different foraging patterns of these birds than that of the ubiquitous Dunlin. Yes, they can be hard to pick out of the Dunlin (though those really red ones tend to stand out), but they really don't forage with the Dunlins. Oh, they roost with them, but they tend to forage with the Semipalmated Plovers and Semipalmated Sandpipers on the mud side of the edge of the water. Obviously, they tend to stand out amongst those smaller species. Finally, though they can and do probe deeply with that long bill, they have a tendency to pick or to probe shallowly.

But, as I wrote above, I'm more fond of the place for the spectacle than I am the rarities. (Though don't get me wrong, if a Broad-billed Sandpiper shows up there, I'll be there in a flash! For those on the text-messaging system here in Cape May, the Bird Banding Laboratory hasn't assigned a 4-letter code to the species, so you'll probably want to spell the name out, because there is conflict with Buff-breasted Sandpiper!) So, to push my favorite aspect of Heislerville WMA, I present the pictures below -- all of which I took on 11 May (along with the pix above). 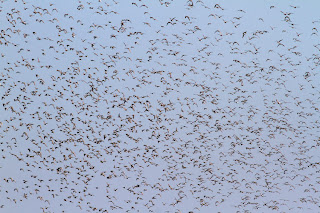 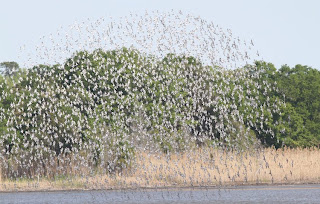 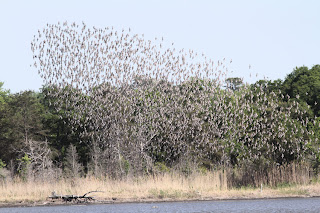 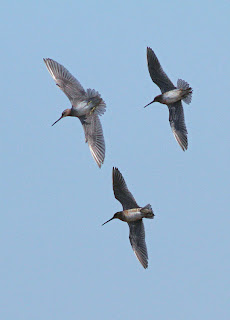 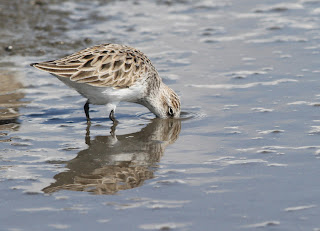 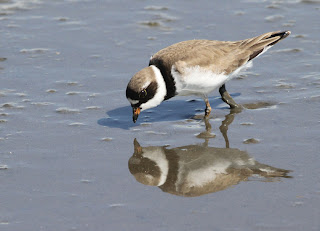 Posted by Tony Leukering at 9:45 PM