It was a weekend of little treats, no major prizes to be scored but some early-season tempters to keep us interested until the main event finally springs upon us. The Dovekie at the meadows proved to be all too brief and was not present on Saturday morning, but birders trawling the area turned up a nice selection of birds; one or two Northern Gannets were welcome after an absence of these majestic birds in the bay lately, while our itinerant male Snowy Owl put in a prolonged appearance, perching atop one of the dune crossover fences at the state park and remaining perfectly still for admiring camera lenses. Luckily for him, our local Fish Crows won't return to the point for a few more weeks yet, but a couple of wandering American Crows did give chase briefly and made for some interesting birding. A Horned Lark passed west along the dune, a Tundra Swan remained on the Plover Ponds and a trickle of Tree Swallows appeared, with birds reported from South Cape May Beach, Miami Beach, Villas, Whitesboro and High's Beach.

On Sunday, two Black-headed Gulls were at Miami Beach, Villas with one reported from the ferry terminal on Monday. At both locations there has been a marked increase in the number of Bonaparte's Gulls and Forster's Terns over the last couple of days too. The Painted Bunting continued to put in appearances at the Northwood Center feeders today and two Purple Finches were the first there since last fall. Out on the barrier islands, the duck show is a real spectacle in the inlets right now; Greater Scaup, Long-tailed Ducks and both Surf and Black Scoters are present in good numbers and all readily viewable. It's also been an above-average winter for White-winged Scoter - at least 12 were easy to pick out among the scoter pack at Avalon yesterday - and good numbers of Horned and Red-necked Grebes continue to be reported.

There may be a few little troughs to come in the weather yet, but over all we are heading in the right direction now and warmer weather will be heading our way, and bringing good birds. This weekend saw Mourning Cloak reported, as well as some unidentified anglewings (either Eastern Comma or Questionmarks) - all butterflies that overwinter as adults and don't need too much change in temperature to tempt them out for a fly around. Amphibians are on the move too - Chorus Frogs, Spring Peepers and Cricket Frogs have all been reported calling at breeding ponds this weekend.

March will soon be upon us and CMBO walks are stepping up and ready to meet incoming migrants. Check out our online calendar and come and join us for a walk, a chat, and some great birding! 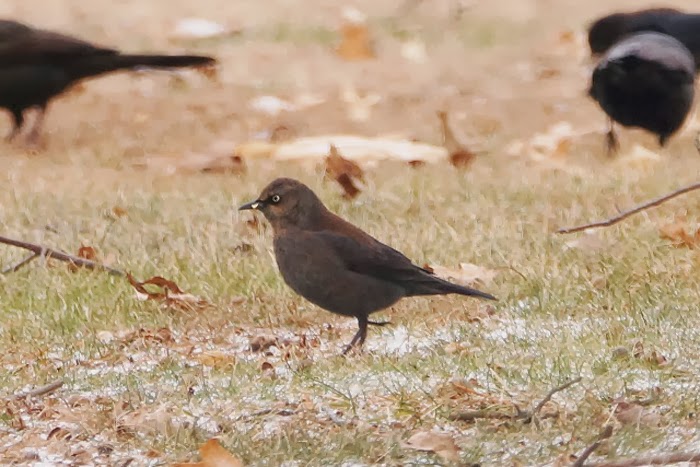 As mixed blackbird/grackle flocks maraud their way through our area, keep an eye out for something a little different. Rusty Blackbirds are declining rapidly throughout much of their range and give great cause for concern. Birders are encouraged to take part in the Rusty Blackbird Spring Migration Blitz and help science to understand what is happening. It is only then that we may be able to start looking at ways to reverse this worrying trend. Visit the International Rusty Blackbird Working Group website and pledge to help with this important work [photo by Jeff White]. 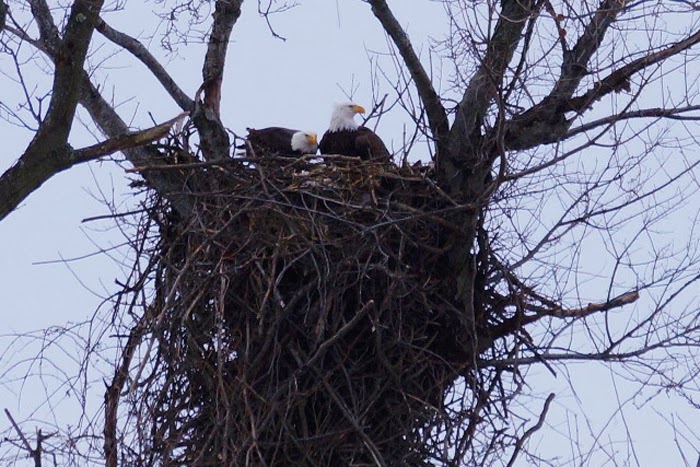 Just a reminder, those big old Bald Eagles should be well settled on eggs in our area now and turning their attention to domestic duties. Bald Eagles continue to respond well to current protection measures and such top predators function as very important indicators of the health of our ecosystems [photo by Jeff White]. 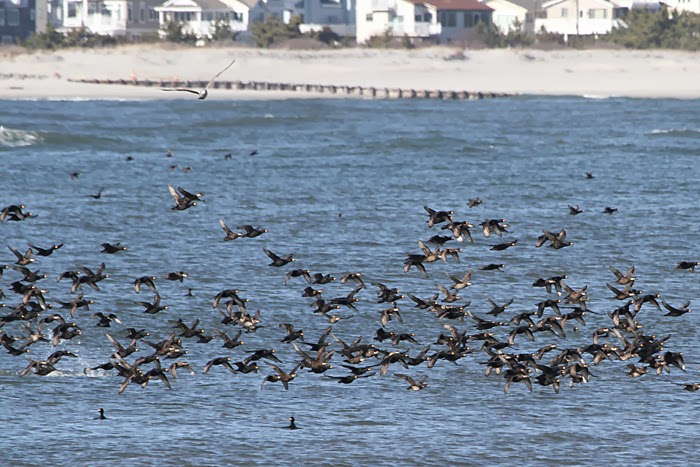 Now that temperatures are a little more bearable, don't miss the opportunity to enjoy the amazing duck spectacular along the barrier islands. The mournful whistling of Black Scoters and cacophony of Long-tailed Ducks is wonderful out there right now [photo by Mike Crewe]. 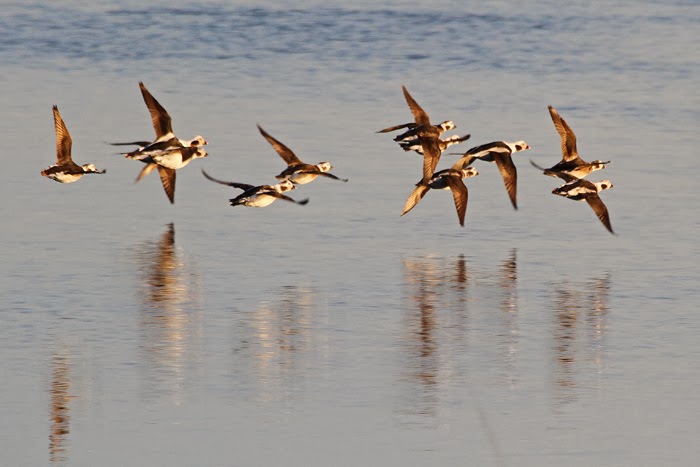 A busy party of Long-tailed Ducks whips down the channel past Nummy's Island in soft, late afternoon light [photo by Mike Crewe]. 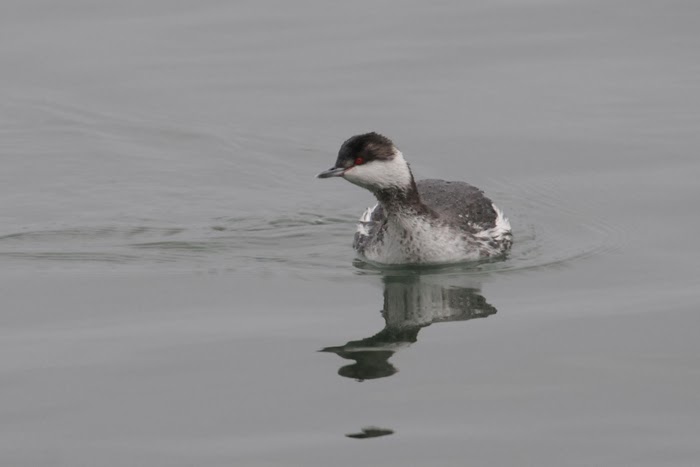 Horned Grebes are still easily viewed around the back bay channels and marinas now. Look for that remarkable, ruby red eye! [Photo by Marvin Hyett] 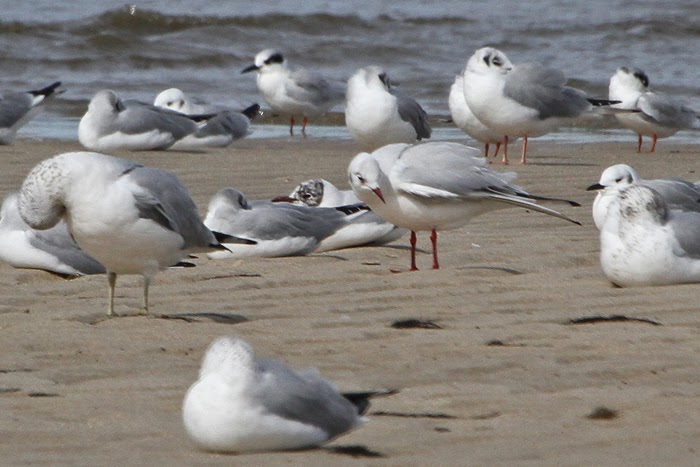 We are right in peak migration time for Black-headed Gulls now, as small numbers head north along the eastern coast of North America. Look for dark, blood-red legs and bill - compare here with the pink legs and black bills of Bonaparte's Gulls (note the Forster's Terns in the background too). Here, one Black-headed Gull at center has a mostly white head while the head of a second bird behind it is already speckled with darker feathers [photo by Mike Crewe].
Posted by Mike Crewe at 7:41 PM