This would not be one of those years where you go out in late February and try to find an early Laughing Gull. Extremely doubtful in fact, especially with the inch of fresh snow that fell on the cape yesterday. I busied myself identifying moths from this past summer, looking out the window at the snow fallen cedar and imagined what the real spring will be like.

There have been signs of spring over the past month- Herring Gulls have lost their salt and peppery heads for snow white ones, Black Scoters numbers just started building at the point yesterday morning, and visible migration of Red-winged Blackbirds and Tree Swallows arriving the point this past weekend.

As unlikely as it is to have an early Laughing Gull this year, the warm spell we recently experienced was compelling enough for one to follow the ferry over from Delaware. As far as we can tell, this is the earliest Laughing Gull to return to New Jersey. Congratulations goes to Bill Boyle who found the bird- the LAGU Award recipient this year! Upon arriving at Douglass Park, I saw the bird wheeling around with a flock of Ring-billed Gulls. I hit window button on my car to take a photo and they all came flying towards the opening window. Sorry guys, I don't have any french fries... At least it afforded some close looks at the finer details of a Laughing Gull.. 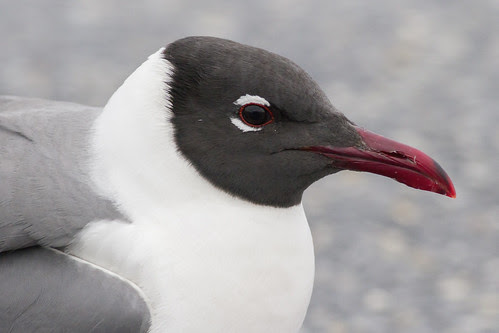 A Laughing Gull's bill strongly resembles the color of blood, something that's literally accurate, at least when it comes to being a predator to endangered and threatened beach nesting birds like Piping Plovers, Least Terns, and Black Skimmers. Some of the finer points of this still beautiful bird- the red orbital ring, a black ring around the very end of the bill, and on this bird, one last feather to molt out behind the eye.
[photo by Sam Galick] 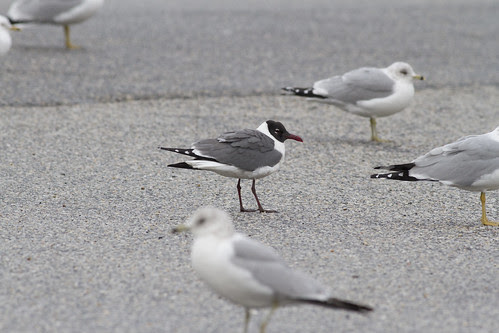 All the locals have a pretty accurate color palette when imagining the back feathers of a Laughing Gull, tens of thousands of pairs breed in the marshes here during the summer so we get used to seeing them every time we step out the door. I'd almost call it a type of egg shell-carbon, the kind you see on cars.
[photo by Sam Galick] 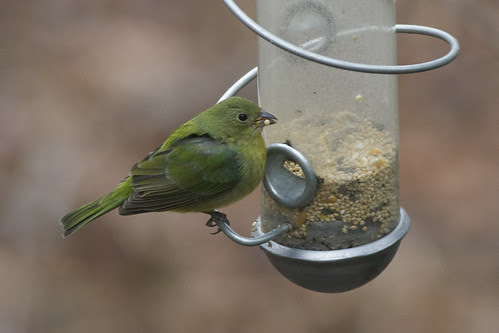 The Painted Bunting that was along Harvard Ave. in the point this past January
has moved to the Northwood Center feeders. Skiddish at first, it's gain some confidence
at the feeders and defends his own little slice from the flock of House Finches.
[photo by Sam Galick] 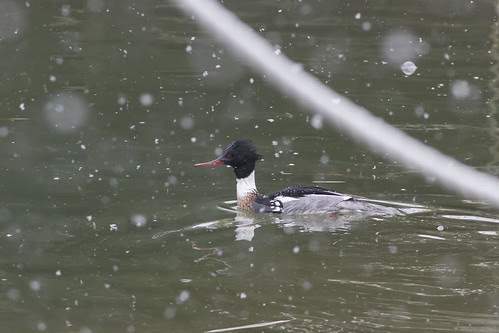 A romp-around the marinas yesterday morning on the barrier islands, you wouldn't think, "yes, Laughing Gull today," with this kind of scene in front of you!
[photo by Sam Galick]
Posted by Sam Galick at 12:10 PM