Every year I fall for it; the first signs of something different happening in the natural world and I start thinking of spring. And yet, it will be another six weeks or so before we can really say that spring has sprung and migration is well and truly under way. Despite this, there is certainly a feeling of change in the air; over the past few days, Northern Cardinals and Red-winged Blackbirds have been starting into song - not really full-bodied yet, but certainly tuning up. Why is this, given that it's still pretty chilly out there? Well, many signs of spring are initiated not by temperature, but by day length. Certain chemicals in the bodies of a wide range of animals and plants can convert to other forms in the presence of sunlight, and the levels of these chemicals can initiate changes in behavior when such chemicals reach a critical level in the body. In this way, the song of birds, the production of flowers in many plants, and the calls of many amphibians - notably frogs - begin in spring. And so, as we reach late February, such things begin at very precise times of the year - no matter what the weather conditions may be.

Other things are clearly temperature related - such as the emergence of hibernating insects - clearly, if you are hidden away somewhere dark, it's going to be temperature not daylength that kick starts you in the spring. And thus our Honey Bees are starting to get active at home now and the first ladybirds and hibernating butterflies begin to appear on milder days. So there are two systems at play - temperature and daylength, evolved over millions of years to the point were it is all interlinked and all dependent on everything else. The chickadee's breeding season is initiated by daylength and is perfectly timed so that the chicks hatch just when caterpillar numbers are peaking on young oak leaves. Yet the caterpillar emergence is controlled by temperature. So what happens if daylength functions and temperature functions get out of sync. with each other? Well it looks like we are finding out these days as each spring brings more and more stories from around the globe of nature being disrupted. This is the most obvious and immediate effect of climate change and something to be more than a little concerned about.

What can you do to help? Well, one thing that is proving helpful elsewhere but doesn't really seem to have caught on much here yet is the study of Phenology - the study of how seasonal changes affect species of animals and birds. Though I have made tentative efforts, there is still no real effort to help with this important work in New Jersey, but if you want to contribute, you might try helping through national schemes such as the USA National Phenology Network.

So what signs are there locally that things are starting to stir? Well, over the past couple of days I've suddenly started noticing parties of Eastern Bluebirds on roadside power lines and perched along the edges of open fields and meadows; it seems they are already starting to head back north in search of spring. Ducks are on the move too and now is a good time to visit a single pond regularly and record the turn over of birds. Visit your local pond daily now and I bet you will see different ducks every time you stop by. The gathering of Redheads seems to have moved from Cox Hall Creek WMA in the last few days, but numbers are increasing on ponds a little further north, so perhaps the northward drift has began with ducks too. While late February and early March can deal us some dreary hands, regular visits to set locations can certainly provide interest now, as the element of surprise is always there! 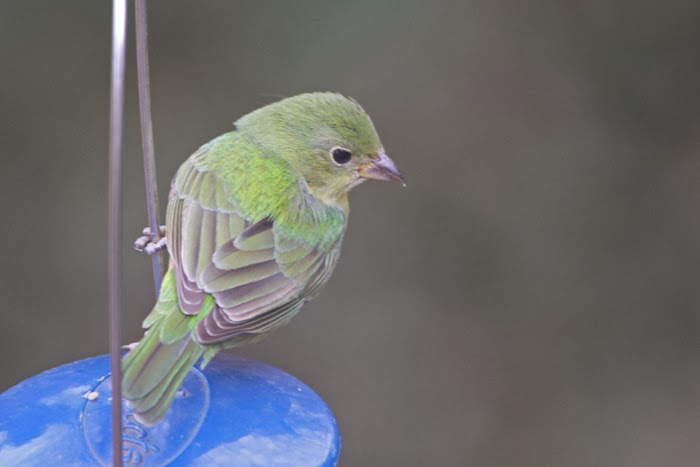 The Painted Bunting that has been wintering in the Cape May Point dunes suddenly showed up at the CMBO Northwood Center feeders today. Having been so faithful to its little spot up until now, it seems quite possible that this new bout of wanderlust may well be the precursor to it heading off elsewhere soon. In case you were wondering, small but distinctive nicks in the tip of the innermost tertial on the left wing confirmed this as the same bird that has been in the dunes since January 1st at least [photo by Mike Crewe]. 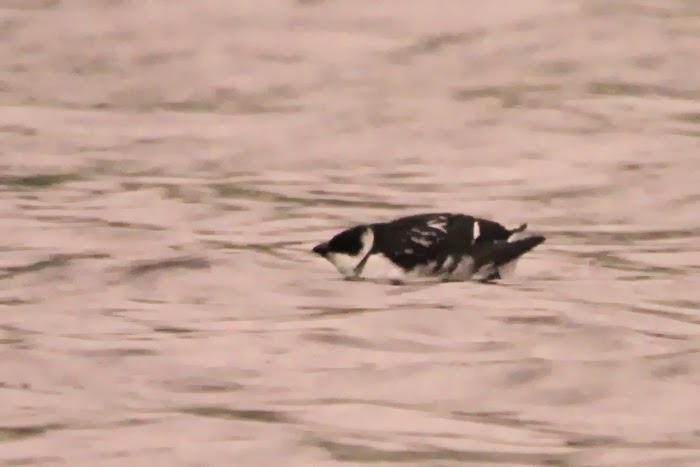 A bird on the move indeed, but not all birds are moving right now just because of the weather. This Dovekie was found on one of the main ponds at TNC's South Cape May Meadows late this afternoon but it seems possible that this normally strictly pelagic bird would have turned up in such an odd place simply because it got disorientated by this morning's fog [photo by Mike Crewe].
Posted by Mike Crewe at 11:47 PM