CMBO is pleased to provide weekly summaries of the Cape's birding highlights. Coverage is limited to sightings in Cape May County. Readers should keep in mind that some reports may not be confirmed. The vast majority of information utilized in these reports comes from eBird data and "Keekeekerr" text alerts. Reports and photos that may be of use for weekly summaries can be emailed to compiler Tom Reed (coturnicops at gmail dot com).

Weather: The first half of the period (8–11 Feb) was tranquil though cold, with daytime highs never surpassing the freezing mark under variable clouds and light NW winds. An onshore flow developed and strengthened through the PM hours 12 Feb, on the leading edge of a strong coastal storm. Precipitation associated with the system started as snow during the 12–13 Feb overnight hours, with accumulations generally 2–3" before changing over to rain, which fell through much of 13 Feb and included a rare bout of Feb. thunder and lightning during the early evening. Precipitation ended as snow with minimal accumulations through the overnight hours 13–14 Feb. Strong NE winds gusted to nearly 50mph through much of the storm. Winds shifted to the west during the early-AM 14 Feb, clearing away the clouds and allowing temps to climb into the 40s to close out the period.

WATERFOWL THROUGH RAPTORS
A Cackling Goose was spied amongst a flock of Canada Geese over Cape May City 14 Feb (WC). Two Tundra Swans, uncommon on Cape Island, remained at CMPSP and SCMM through 12 Feb (m. ob.). A male Eurasian Wigeon was seen along Ocean Drive and in Cape May Harbor 9–10 Feb (WT et al.); two males were seen near the Bree-Zee-Lee Yacht Basin along Ocean Drive 14 Feb (SG). At least four Redheads held on at CMPSP through the period (m. ob.), while the impressive wintering flock at Cox Hall Creek WMA peaked at 21 individuals on 12 Feb (MP). Nummy Island's two hen King Eiders continued through at least 10 Feb; recent sightings have come from the "toll bridge" at the south end of the causeway (m. ob.). Large numbers of seaducks have been present at Avalon's 8th St. Jetty recently. A total of approx. 1500 birds on 14 Feb was comprised primarily of Black Scoters, along with smaller numbers of Long-tailed Ducks, Surf Scoters, and 35-40 White-winged Scoters (TJ, SG). Notable was a northbound movement of 46 Horned Grebes past Sunset Beach 11 Feb (SG et al.). Red-necked Grebes continued to filter into the area this week. A sample of reports included a minimum of 3 in Cape May Harbor through much of the week (m. ob.), 2 at Corson's Inlet 8 Feb (TBx), 4 at 96th St., Stone Harbor 10 Feb (SG, DG, GD), 3 at Sunset Beach 11 Feb (SG et al.), 1 at Sunset Lake 13 Feb (JCu), 4 at Sunset Beach 14 Feb (MP), 3 in a small pond at North Wildwood 14 Feb (JCr), and 1 at SCMM 14 Feb (CV). American Bitterns were noticed at Higbee Beach WMA 9 Feb (SH), Reed's Beach 12 Feb (TR), and SHPt 14 Feb (HT). February Tricolored Herons are always newsworthy; one survivor persisted along Sea Isle Blvd 14 Feb (TBx). A Northern Goshawk continued to terrorize Cape Island through 11 Feb, when it was last seen near CMPSP (GD). A dark-morph Rough-legged Hawk was a curious find at Sunset Lake 10–12 Feb (SK, MH et al.). Most winter reports of this species come from the Delaware Bayshore and Tuckahoe River marshes. 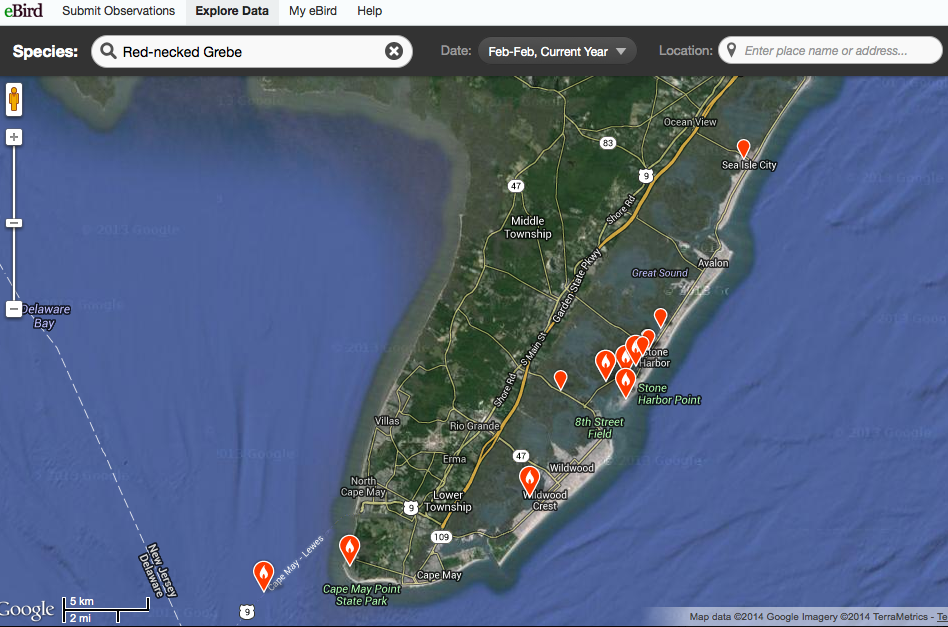 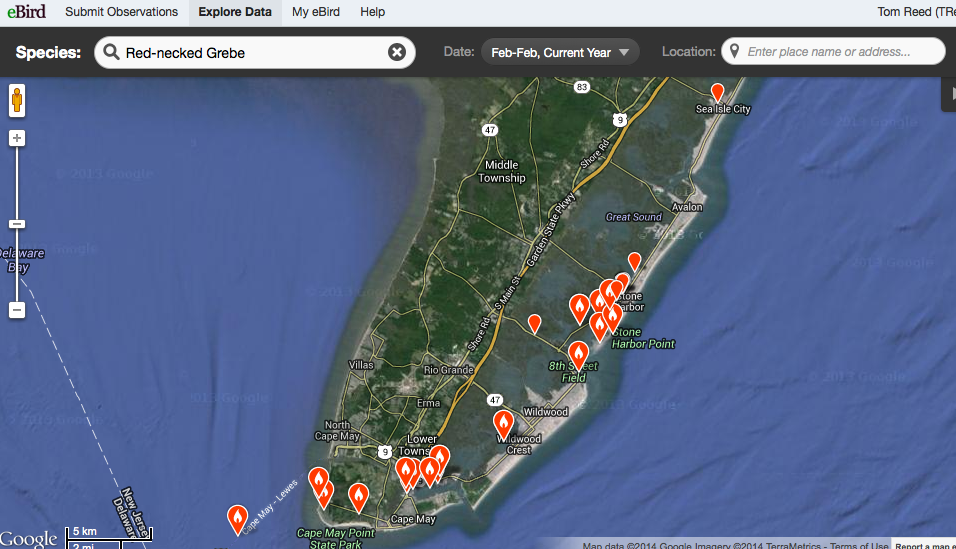 RAILS THROUGH OWLS
A Virginia Rail met an untimely demise when it collided with a moving vehicle at CMP 8 Feb (TBa). Another survived at CMPSP through 12 Feb (GD). Shorebirds continued to be in short supply, particularly along the Atlantic Coast, though Hereford Inlet's wintering flock of American Oystercatchers still contained at least 45 individuals this week (m. ob.). A flock of 41 Purple Sandpipers occupied the jetty at Two Beach Mile 11 Feb (MC). A Razorbill was swimming just offshore Poverty Beach 9 Feb (RC, m. ob.). Four Razorbills flew past Two Mile Beach during the nor'easter 13 Feb (TR), and three more flew out of the bay at Sunset Beach 14 Feb (MP). The wayward Common Murre at Sunset Lake stayed until at least 12 Feb (m. ob.). This species has only been seen from shore in Cape May County a handful of times. An adult Black-headed Gull was glimpsed again- this time along Delaware Bay near the ferry terminal 11 Feb (MP). An Iceland Gull put in a brief appearance at Two Mile Beach 13 Feb (TR), while a Lesser Black-backed Gull flew past CMP the same day (GD). Two long-staying Eurasian Collared-Doves remained at CMP, most often in the area of Harvard/Coral/Lincoln Avenues, though they have been more difficult to find during recent cold weather (m. ob.). SHPt continued to host at least one Snowy Owl through 14 Feb (m. ob.). Additional Snowy Owls were noted at the east end of Jefferson Ave in Wildwood Crest 8 Feb (TBa), along Beach Ave in Cape May City 9 Feb (m. ob.), at the Cape May Coast Guard Base 11 Feb (CH), and on the north side of Cape May Harbor 14 Feb (CV). Surprisingly, there were no reports of Short-eared Owl this week. A Long-eared Owl was a bizarre midday sight 13 Feb as it flew along Route 47 in Green Creek (TR).


FLYCATCHERS THROUGH FINCHES
Songbird numbers are undoubtedly near annual lows at this time. An Eastern Phoebe lingered at CMP through 9 Feb (GD, DG, SG), while the same or another was seen again along Stevens St. in West Cape May 11 Feb (MO'B). A total of 34 Horned Larks notched at Sunset Beach 10 Feb, including a fly-by flock that contained 22 birds, was certainly weather-related (CV). Cape May County's fourth Black-capped Chickadee continued to delight observers at CMP through at least 12 Feb (m. ob.). A Lapland Longspur flew over Reed's Beach 12 Feb (TR); the Smith's Longspur hasn't been reported at SHPt since 31 Jan and has presumably moved on. Multiple Snow Buntings remained at SHPt through the period (m. ob.), though numbers at that site continue to decrease. Two Orange-crowned Warblers were accounted for at CMPSP 10 Feb (MP). American Tree Sparrows were again reported at multiple locations (m. ob.). Remarkably, the Painted Bunting at CMP was rediscovered 14 Feb in the dunes at the end of Whilldin Ave (WC et al.). This sighting apparently establishes the second Feb. record of the species in Cape May County. Purple Finch was a bit more evident this week, with a max count of 12 at CMP on 9 Feb (DG et al.).