Clay-colored Sparrow, Mississippi Kite; off to the North

Hot off the press: Michael O'Brien reports a Mississippi Kite headed south over Rio Grande. Funny, I told the Higbee group this morning that it felt like a Mississippi Kite day, not such a difficult prediction: May + Cape May + clear skies + light northwest winds = kite.

We had a big group on the CMBO Higbee walk, big enough that near the end of the walk, Dave La Puma sent a text message to me at the front of the group to let me know they had a Clay-colored Sparrow in back! Dave was helping out as a leader, along with several others - we always have plenty of leaders to make big groups work when they happen on these no-preregistration-required walks. Those of us at the front of the group flipped around immediately, of course. I believe Ray Duffy spotted the Clay-colored first, almost certainly the same bird that Vincent Nichnadowicz found at Higbee on Wednesday - thanks Ray and Vincent! Clay-colored is super-rare in spring, and although it has wintered a couple times in southern NJ, this bird is a clear migrant. The species has been expanding its breeding range, e.g. in New York State. Interestingly there have been a couple Clay-coloreds found singing, as if on territory, in northern NJ in the past decade. I'm still picking Merlin as NJ's next breeder, but wouldn't rule out the sparrow.

Other Higbee highlights included several Yellow-breasted Chats, with one performing admirably at the north end of the "tower field," i.e. to the left as you enter the fields and the edge closest to New England Road. We heard, but did not see, a Blue Grosbeak, but multiple Indigo Buntings made up for that. Migrants included several flyby Baltimore Orioles, a soaring Broad-winged Hawk (one of the local Bald Eagles flew past while we were watching it), a few Blackpolls, a singing Warbling Vireo, etc. - the full list is up on Field Trip Reports, along with reports from several other recent field trips.

A Wilson's Phalarope was at Heislerville Wednesday, and I hear one appeared, remarkably, inland in north Jersey at the Celery Farm.

[One of what eventually became 8 (according to Sam Galick) Cattle Egrets at the Shunpike Road pond on Cape Island this morning. This one was by itself at 7:00 a.m.]

Speaking of north Jersey, after tomorrow that's where I'm off to. Of course one misses Cape May, but the pic below displays one (rather, 3) of many reasons to love all NJ, not just Cape May. It was taken in High Point State Park, while Michael O'Brien and I took a break from our preliminary dry run of the Zeiss Team's World Series of Birding route yesterday morning. 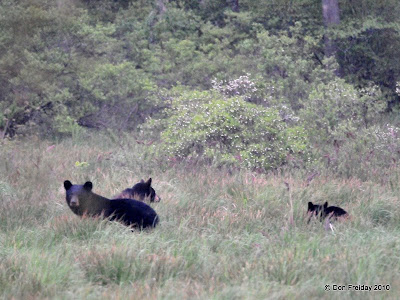