[This Cedar Waxwing, at the Beanery today, had just one secondary with a faint waxy tip (not visible here). Waxwings are named for the waxy substance exuded from the secondary feather shafts; this bird, almost lacking "wax," is a second year bird, not an older adult, aged by the lack of "wax" and the tapered, not truncate, tail feathers. More interesting, check out the orange tips on two of the tail feathers. The orange tail tip color, occasional in waxwings apparently only since the 1960's, is thought to relate to red pigments present in berries of non-native plant species, particularly honeysuckles. If a young waxwing is fed or otherwise consumes enough of these berries while the tail feathers are growing, the tail tips will be orange, not yellow. Click to enlarge photos.]

The bird list from CMBO's Spring Weekend is posted under field trip reports, and features 177 species so far, not including the Curlew Sandpipers at Heislerville and 2 Black Rails discovered by kayak late at night at Turkey Point at a location out of earshot of the road. Yesterday's terrific set of migrants and rarities (=kites) comprise the bulk of the list - 28 warbler species were found. This morning it was clear yesterday's migrants had cleared out, with few or none replacing them. A Black Tern was detected by Tony Leukering from the ferry today, and two different plumaged Curlew Sandpipers have been seen at Heislerville, one most recently this afternoon by Doug Gochfeld. The Piping Plover chicks at the South Cape May Meadows have drawn many oohs and aahs over the weekend.

Neither the Scissor-tailed Flycatcher nor the Black-necked Stilts were found today, second day in a row, and are presumed gone.

[This Yellow-billed Cuckoo at the Beanery challenged us to get a good view of it today; eventually everyone did, most through the scope.] 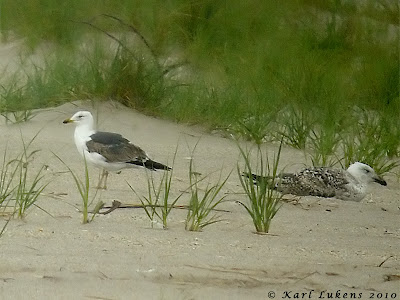 [Karl Lukens photographed this Lesser Black-backed Gull (left) at the meadows today. Lessbacks have been less common this year than the past two.]
Posted by Don Freiday at 10:07 PM