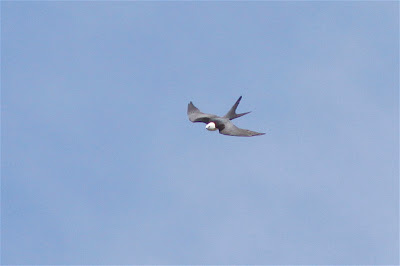 [What a gorgeous bird the Swallow-tailed Kite is. Michael O'Brien photographed yesterday's bird from Stevens Street on Cape Island. Click to enlarge.]

A Long-billed Curlew report has emerged in the back bay area in the vicinity of Jarvis Sound/Reuben's Thorofare/Two-mile Landing, via Ginny Powell of the Skimmer. There is also a Marbled Godwit and the continuing Harlequin Duck in the area. Your best bet is to try one of the boat trips that visit the back bays.

Gail Dwyer's Painted Bunting continued at her Avalon feeder through at least yesterday afternoon, and remarkably I hear there is another at a private feeder on the bayshore right now! Gail's at 165 38th Street in Avalon and graciously said birders can come by; please be quiet and courteous, and don't arrive too early in the day. The bird has been regular at the pagoda style feeder in the backyard, but was first seen in the side yard, at feeders visible from the street.

The Swallow-tailed Kite was not seen to leave Cape Island yesterday, far as I know. For whatever that's worth. Michael O'Brien reports that the immature male King Eider continues, remarkably, at Poverty Beach this morning.

Other than looking out the window, I haven't been doing much birding the past couple days - that's about to change in a big way with the coming World Series of Birding, though I will be "stuck" (not!) in northwestern NJ scouting. There's a reason we do our Appalachian Birdsong Immersion workshop up there - or 140+ (species) of them! But I did hear migrating White-throated Sparrows, Savannah Sparrows, Chipping Sparrows, and American Redstarts over my deck at 3:00 a.m. this morning, and hear from Vince Elia that Higbee was quite good: 2 Yellow-billed Cuckoos, 2 Eastern Wood-Pewees, 6 White-eyed Vireos, 1 Blue-headed Vireo, 3 Red-eyed Vireos, Ruby-crowned Kinglet, 2 Wood Thrushes, 6 Northern Parulas, Magnolia Warbler, 5 Black-throated Blue Warblers, 2 Blackpolls, Black-and-white Warbler, 5 American Redstarts, Ovenbird, 3 Yellow-breasted Chats, 3 Scarlet Tanagers, 2 Rose-breasted Grosbeaks, 2 Blue Grosbeaks, 3 Baltimore Orioles, &c. Vince also had the Blue-winged Teal and multiple Solitary Sandpipers on the Shunpike Pond, a.k.a. Mcpherson's Pond, a.k.a. the pond on the right side of Shunpike Road if headed south from New England Road on Cape Island. Add 2 Cattle Egrets in the back of the horse pasture west of Bayshore Road, north of the Beanery.

CMBO-CRE in Goshen isn't such a bad place to look out the window - yesterday I had a pair of Yellow-billed Cuckoos chasing each other around, Blue Grosbeak, Indigo Bunting and Orchard Oriole song is constant, at least once a day someone calls "Bald Eagle!" down the hall, and yesterday Dale Rosselet had a Cooper's Hawk pursue (unsuccessfully) one of the neighbor's chickens! This morning there are multiple Blackpolls and probably other warblers in the oaks here, too, perhaps a little stroll is in order. . .
Posted by Don Freiday at 8:50 AM