[Photographs are copyright by Tony Leukering 2011.]

The spectacular adult male King Eider continues in the mixed eider/scoter flock at the Seawatch at Avalon, being seen this morning between the Seawatch and the inlet by Vince Elia. Yesterday, it put on a great show, providing incredible looks right in front of Seawatch. The flock of ducks with which it is associating is dominated by Common Eiders, which number nearly 80 (I counted 71 yesterday, Don Freiday counted ~80 the day before). As the flock is often close, it provides enjoyable opportunities to practice ageing and sexing of the various species, with the Common Eiders being most interesting in that regard (at least, in my opinion).

Yesterday, I noted a female Common Eider that was much grayer and more-strongly marked than most or all of the others, so was wondering about a different subspecies (dresseri, breeding from n. Quebec to Maine, is the regular form here; borealis from farther north, breeding from e. Nunavut east to Labrador, is the next best option). Unfortunately, my camera decided not to work, so I got no pictures and hadn't, yet, figured out how to separate them. Others may want to work on that; The Sibley Guide provides some good pointers, with his 'Atlantic' birds being dresseri and his 'East Arctic' form being borealis. Note overall color differences and the extent of the bill lobes and eye placement. Keep in mind that even in dresseri, adult and breeding-season females are grayer than juvenile and non-breeding females -- generally.

Unlike previous years when scoters dominated the Avalon wintering flock, the number of scoters this winter is very low, with no White-winged Scoters. Yesterday, I counted just 24 Surf Scoters and five Black Scoters (though I did see flocks of Blacks flying by). A male Long-tailed Duck with the flock (the only one with the flock then) had a neck that was nearly all blackish -- already well on its way in changing plumage to the one that male Long-taileds wear in spring. Finally, I counted five Purple Sandpipers on the jetty in front of the Seawatch.

Speaking of Seawatch, itself, the season's count ended -- as per usual -- on 22 December, so you're on your own there, until the start of next year's waterbird count on 22 September.

Jim Dowdell has been tracking the occurrence of a juvenile Great Cormorant that has been loafing and roosting at a most unusual location: Lake Champlain in southern Villas (Champlain Dr. east of Bay Dr.). He has seen the bird most times that he has visited the site since late October, though I hadn't seen it either of the two times that I'd visited, once each in November and December. This morning, Jim called to say that it was there, along with a Cackling Goose, which made Jim's first record of the species there in the 16 or so years that he's been visiting the site. I bopped on down and, lo and behold, both birds were still there, along with some 16 Hooded Mergansers and a variety of other waterbirds. The Cackling Goose was almost certainly the same bird as has been noted a few times recently just a flap or two away at the Cox Hall Creek WMA. 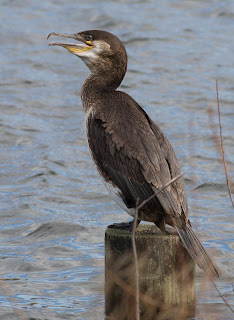 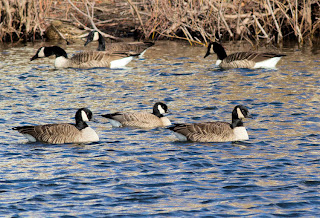 Posted by Tony Leukering at 2:01 PM