A December Day To Remember

Saturday December 3rd was a real day to remember in Cape May, with three major rarities and a strong supporting cast all south of the canal. Top award for bird of the day goes to the Bell's Vireo that was at The Beanery near the parking lot for most of the day, last being seen around 4PM on the woodland edge at the north side of parking area, right beside Bayshore Road. Unfortunately, though the bird was looked for today, it was not refound - though it may still be in the area of course. A mere 400 yards away from this bird, the stunning adult male Painted Bunting remained all day and showed well on and off at backyard feeders on Bayshore Road, just north of the entrance to the Hidden Valley Riding Center. Bronze medal of the day goes to the long-staying Ash-throated Flycatcher which, though elusive at times, remains relatively faithful to the south field at Cape Island Preserve off Wilson Street. Both the bunting and the flycatcher showed well today too. 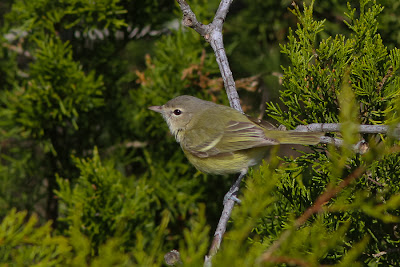 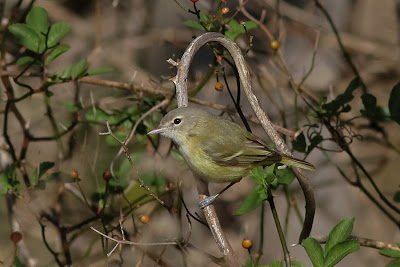 Bell's Vireo at The Beanery on Bayshore Road on Saturday. [Photos copyright Michael O'Brien]
Other long-stayers around all weekend included the White-winged and three Eurasian Collared Doves at Cape May Point, up to three Eurasian Wigeon on Lighthouse Pond and at least one Cave Swallow still at the state park. Vince Elia reported 40 Snow Buntings flying past Cape May Point this morning and at just after 4PM today, Tom Reed reported a first-winter Iceland Gull seen from the Avalon Seawatch as it headed into the gull roost at the south end of Sea Isle City.

Some of us missed the vireo yesterday, but we were nevertheless enjoying ourselves on our annual early December Barnegat Bay trip for Harlequin Ducks. For pictures and to see how we got on click here.
Posted by Mike Crewe at 4:41 PM