It's been a fairly quiet few days at the back end of this week, though a stormy north-westerly on Wednesday night probably shook a few things up, as will have the white frosting on the ground that I discovered in the garden this morning. Our bird bath was frozen over for the first time this season and such temperature changes are likely to get things on the move again. The adult male Painted Bunting was not seen this morning (Friday) for the first time during its stay; it's a little early in the day to know whether it has left for certain yet, but it is a least a break in routine. We will keep you posted. I hear that the female Rufous Hummingbird is still visiting feeders up at our Goshen Center - tomorrow will make seven weeks that this bird has been around (and I still haven't seen it!!). There has been no word for a couple of days on the female south of the canal but it may still be around. It has been seen at various feeders and red-flowered Pineapple Sage plants in gardens around the Foster Avenue/Batts Lane area and adjoining part of New England Road.

At the Seawatch, Razorbills continue to be hot news with two settling on the water off 8th street this morning. A small whale reported off Avalon on 7th turned out to be a small Humpback, with a second whale seen briefly further out. Despite poor weather conditions, several observers managed to see this animal from shore. Avalon also produced late Brown Pelican and at least three Parasitic Jaegers on 6th and a fly-by Harlequin Duck on 7th. A Dickcissel was at a backyard feeder in Del Haven on 7th and 8th at least and a very late Osprey flew over The Beanery on 8th.

It seems likely that, if nothing else, this cold snap will put paid to the amazing late run of butterfly and insect records around Cape May County. Will Kerling tells me that 10 butterfly species have been recorded in the county this month and Will finally tracked down a Citrine Forktail for the month too. The butterflies recorded are: Small White, Clouded Sulphur, Orange Sulphur (by far the commonest species), Monarch, American Lady, Sachem, Fiery Skipper, Common Buckeye, Mourning Cloak, Red Admiral.

Tagging gives insight into migration routes
I've been looking for a lull to mention reports made during the Fall of wing-tagged Great Egrets around Cape May - and finally I have that moment! Thanks to Pam Higginbotham for alerting me to the presence of at least two wing-tagged Great Egrets, both of which appear to have been tagged at breeding grounds on Lake Huron and Georgian Bay, near the communities of Collingwood and Southampton, Ontario - north and north-west of Toronto, Canada. Bird banding has long been used as a method for collecting data from birds during their lifespan, but colored patagial tags with a series of numbers and letters are far more visible to the casual birdwatcher and thus give a greater chance of sightings being made in the field. Such tags are used a lot for larger birds such as raptors and waterbirds and can give us a lot of information on movements of birds, including their migration routes and their breeding grounds. 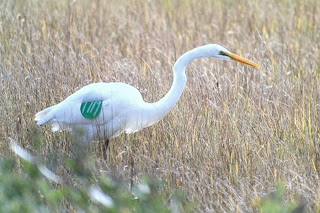 Wing-tagged Great Egret (green tag with white 19M) at Cape May on October 27th. The same day, bird 18K was also in the county. Movement of feathers can make the alphanumerics difficult to read but it is worth persevering as the more accurate the data you can collect, the more useful it is to the researchers. [photo taken by phone by Pam Higginbotham]
Posted by Mike Crewe at 11:51 AM