On behalf of Mike and the blog team, I apologize for the lack of recent updates. 'Tis the season, after all, and the holidays are a busy time for us too. So, let me catch you up on what's been happening on the Cape recently-

The main attraction is currently a King Eider that joined the seaduck flock at the Avalon Seawatch on Thursday. It was still being seen this morning, and as the photo below demonstrates, it is truly worth going to see! 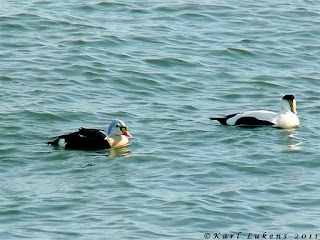 [King Eider (left) and Common Eider in front of the Avalon Seawatch on Thursday.
Photo by Karl Lukens; click to enlarge.]

Also at the Seawatch on Thursday was a fly-by Black Guillemot, quite possibly the same individual seen flying south along New Jersey's north shore the afternoon before. That bird hasn't been seen again. Other Seawatch sightings included another handful of Razorbills, a couple Red-necked Grebes and a few Black-legged Kittiwakes- not a bad way to end the season!

Speaking of Kittiwakes, a few have also been seen recently from Cape May Point. The past month has provided a surprisingly high number of Kittiwake sightings from shore, and it will be interesting to see if the trend continues into the new year.

The Cape May Christmas Bird Count was held last Sunday, and as always, it provided a number of highlights. Among these were the Beanery's Bell's Vireo (which hasn't been reported in the past few days), an unidentified hummingbird in Cape May, a lingering Glossy Ibis on Cape Island, the continuing Eurasian Wigeon(s) on the Point ponds, several Orange-crowned Warblers, Marbled Godwits at Stone Harbor Point, and a few other birds I'm sure I've forgotten.

Other recent goodies included a Lark Sparrow on Thursday, found by Jim Dowdell at the end of Seaview Road in Ocean City; continuing Cackling Goose and Red-headed Woodpecker at Villas/Cox Hall Creek WMA; and a handful of lingering Palm Warblers at the Beanery as of yesterday.

We wish you and yours a very Merry Christmas and Happy Holidays!
Posted by Tom Reed at 2:10 PM