One of those "You Never Know" moments...

You know what birding is like; you get up in the morning and you never quite know what is going to happen - that's what elevates birding above plane spotting (no offence to plane spotters but, you know, if you have a timetable you pretty much know what you're gonna see that day!!). This morning was just like any other December morning when it started - until two kind birders strolled into the Northwood Center and revealed that they had just refound the Bell's Vireo! Yes, the Bell's Vireo, that had been right at the entrance gate to The Beanery for just one day - December 3rd - and hadn't been seen since! Surely not? Surely it can't have been lurking there all this time ... unseen ...well, it seems that it can!!

I gave it a good shot on an early lunch break - an hour at the gate and no sign. Plenty of other stuff; both Ruby-crowned and Golden-crowned Kinglets, Winter Wren, Yellow-rumped Warbler, Northern Flicker (all good fodder for the forthcoming Christmas Bird Count this weekend), but no vireo. I missed it before as its appearance coincided with our annual trip up to Barnegat Light for the wonderful Harlequin Ducks. Now I was missing it again. After an hour I left Karl Lukens who spent another 30 minutes there, still with no luck. But then Glen Davies gave it a shot and the message was out - Bell's Vireo at the gate and showing well!!

It seems that the Bell's Vireo likes to spend a lot of time feeding low amongst dense vegetation, so do bear this in mind if you come looking for the bird. Today it spent a fair amount of time hunting insects on the ground or very low amongst stands of Common Reed stems, just west of the entrance gate at The Beanery, on the north side of the first field, but also ventured east of Bayshore Road on the hedgeline that runs along the old railroad track. Please be aware that this is private farmland on the east side of Bayshore Road. 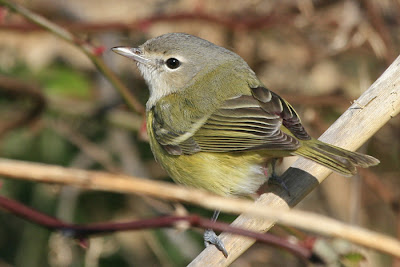 Bell's Vireo at The Beanery today [photo by Mike Crewe]
Other bird news
Time has flown by and it's been a few days since I posted latest news, but December can be a little quiet of course. As is to be expected, the keen eyes of Tom Reed have been turning up the goods at the Avalon Seawatch and it's certainly been a good season so far for Razorbill sightings with small numbers seen on several dates of the past few days. Both Little and Black-headed Gulls have been seen, but perhaps the highlight has been a Humpback Whale which has been feeding and hanging out off Avalon for several days to December 12th at least. The Ash-throated Flycatcher was last reported on December 10th, when it seemed to be ranging even more widely and had moved on to nearby private land. The three Eurasian Collared Doves continue to hang out in the vicinity of Whilldin Avenue and the White-winged Dove was reported again today (14th) after a brief disappearing act and is currently being seen on Stites Avenue. 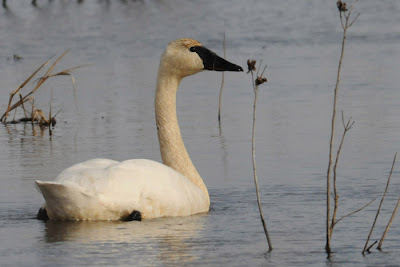 On a very different topic, this apparent Trumpeter Swan has been causing consternation it seems since at least late November at Brigantine. This species has a checkered history on the East coast; on the face of it, a true vagrant from the relatively small and threatened wild population that breeds in the north-western States and western Canada seems unlikely. Yet there are vagrancy records from many parts of the US so such an occurance should not be dismissed out of hand. Alternatively, we have to consider the possibility both of possible escapes from captivity or even possible hybrids with Tundra Swan. There are currently no accepted records of wild Trumpeter Swans in New Jersey - so this bird is open to offers... [photo by Marvin Hyett, December 8th ].
Posted by Mike Crewe at 3:11 PM