The Holiday Season causes some minor upheaval in the flow of information from Cape May, as people head off to reunite themselves with family and friends. But the birds carried on regardless and ensured some happy times in the field over the past two weeks. Having been away during this period, I returned to a stack of emails (now mostly worked through!) and amongst them were a few photos which I've posted here.

As of today, the male King Eider remains at Avalon and the Bell's Vireo is present but elusive still, by the entrance gate to The Beanery. Today's big new arrival was an immature White Ibis reported by Glen Davis which showed up on Lake Lily, along with a Great Egret and a Great Blue Heron. This is a real oddball bird to turn up in late December but a nice end of year present for those lucky enough to see it. The bird flew off NW around 2:15PM but may well show up again at some point. Lake Lily down here at Cape May Point holds a great array of ducks at present (including Redhead and Eurasian Wigeon) and is certainly worth a visit.

Other birds this past few days include a Dovekie at Atlantic City beachfront on 27th and another which flew into Hereford Inlet (between Stone Harbor and North Wildwood) on 28th. A Dickcissel has been hanging out with House Sparrows at 105 Harvard Avenue at Cape May Point for several days now and two Baltimore Orioles were at the Hawkwatch on 28th. A Glossy Ibis and up to four or five Blue-winged Teal continue to hang on at the point and Tom Reed reported two Rough-legged Hawks at Tuckahoe WMA today. 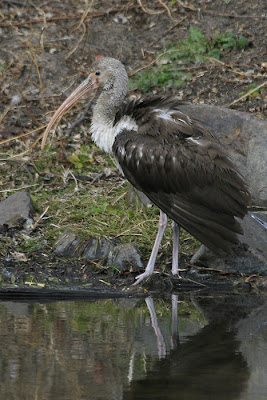 White Ibis on the island in Lake Lily today. The bird flew off towards Pond Creek Marsh early afternoon but may still be in the area [photo by Mike Crewe]. 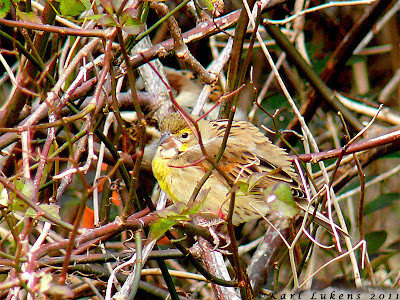 This Dickcissel continues to lurk in rose bushes along Harvard Avenue, just behind the dune in Cape May Point [photo by Karl Lukens]. 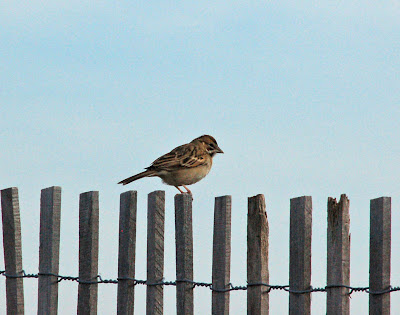 Jimmy Dowdell and Clay Sutton found this Lark Sparrow at Ocean City, at the end of Seaview Road, on December 22nd [photo by Pat Sutton]. 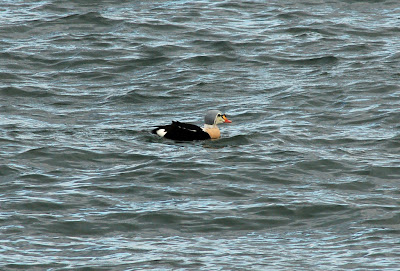 Avalon's King Eider is putting on a good show for its admirers [photo by Pat Sutton].
Posted by Mike Crewe at 3:54 PM