Our annual 'Kick Off Your Year List' event took place today and we really did have a great day out under almost cloudless skies and mild weather. We started at Cape May Point State Park - more from habit than because of anything unusual in the area and we were soon adding up a nice list of the commoner birds of Cape May. Some of the highlights included four Baltimore Orioles feeding on Juniper berries with an American Robin flock, Great Blue Heron (the first of four seen today) and a nicely perched Red-shouldered Hawk - yes, it really was a Red-shoulder folks, despite some confusion at first! At least a dozen Forster's Terns were in The Rips, along with one or two Northern Gannets, Black Scoter and Red-throated Loons. A walk through to Lake Lily via Lighthouse Pond added various ducks, including Ring-necked Duck, Hooded Merganser and the female Common Merganser that has been around for a few days now. We walked back to the state park via Harvard Avenue where a Dickcissel that has been hanging out with a House Sparrow flock showed amazingly well. The morning was already running away from us but there was still time to visit The Beanery where - against all bets - the Bell's Vireo appeared almost immediately and showed in full view for some 20 minutes in front of the whole group.

Time for lunch, then we met back up again at Avalon where we checked out the avian goodies in Townsend's Inlet. With continuing mild weather, duck numbers are fairly low here this winter, but we still had a nice tally, with Long-tailed Duck, Surf Scoter and Common Eider, several Common Loons and three Horned Grebes, while I also heard of a White-winged Scoter seen by some of the group. Purple Sandpipers were on the rocks too. A short drive brought us to Stone Harbor Point where the beach was buzzing with activity as usual. Sanderling and Dunlin dominated, but two Red Knots and a few Black-bellied Plovers were here too. Our day was closing fast so we finished off on Nummy's Island. Here we added Great Cormorant, three Buffleheads and a distant Peregrine to our lists then watched the sun set behind a gathering shorebird roost that included several American Oystercatchers and five Marbled Godwits. A great day, and many special thanks to all those who took part and made this yet another very special Cape May experience. I've put a full bird list for the day on our Field Trip Reports page.

Other bird news
With many of Cape May's resident and visiting birders out in the field today, the text messaging services were doing their best to up the economy! Some of today's highlights included:

A few recent birds were NOT reported today, but would be expected to still be in the area as they were noted the day before. These include the three Euraisan Collared Doves and one White-winged Dove around Cape May Point and the male Eurasian Wigeon on Lighthouse Pond/Lake Lily. The male King Eider wasn't seen today or yesterday, neither was the White Ibis - as far as I know... 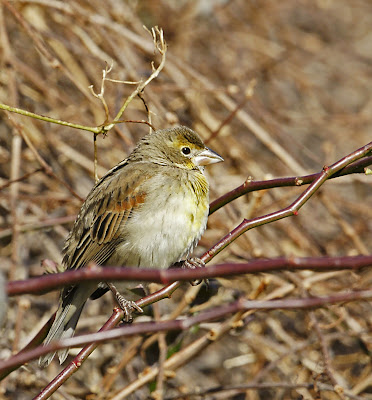 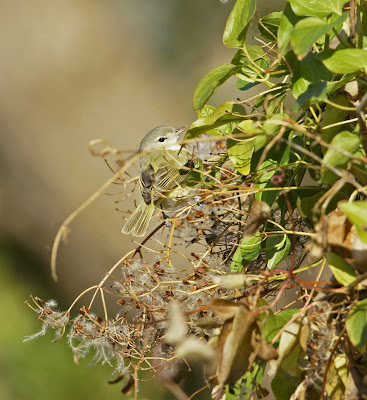 The Harvard Avenue Dickcissel and the Bell's Vireo at The Beanery both performed very well for our group and provided several people with new birds - a great way to start the year! [Photos by walk participant Carl Marcus]
Posted by Mike Crewe at 7:11 PM