Gulls at Miami Beach and elsewhere

Don Freiday started things off this morning, texting at 8:26 that the adult Black-headed Gull that has been wandering the southern Cape May County Bayshore was with Bonaparte's Gulls off Miami Ave. in Villas. I quickly bounced out of my house to find it, as I had been looking from the yard quite extensively this month without seeing the beast. It was raining, visibility was not the best and I could not find much in the way of small gulls; I went back inside.

Then, Larry Scacchetti texted at 9:17 that there was a Black-legged Kittiwake at Miami Ave. with the Bonaparte's Gulls! I bounced out again and, lo and behold, there was an adult Kittiwake! While occasionally seen from Cape May Point and other sites on Cape Island, kittiwakes are quite rare up the Bayshore. Sam Galick got some nice pictures of the bird, one of which is below. 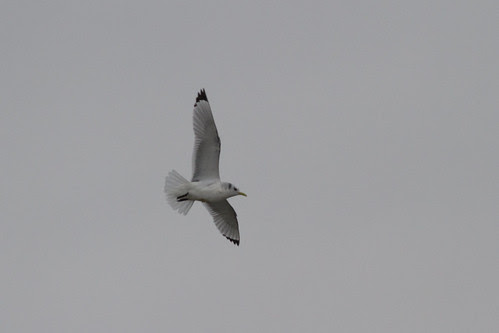 Shortly after seeing the Black-legged Kittiwake, I found the adult Black-headed Gull flying into the gulls on the spit north of Miami Ave. It eventually started heading south, so I bolted into the house to get my camera and managed to get back out to the back deck just in time for the bird to fly right by (see below). 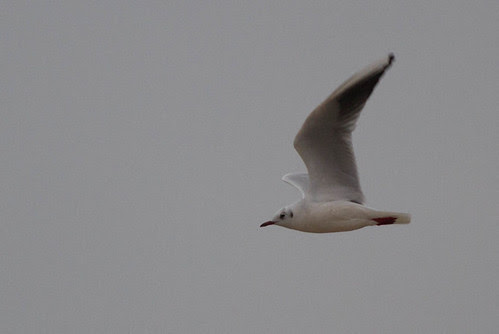 Then, Mike Crewe found an Iceland Gull flying south past Sunset Beach a bit before 11:00, which Scott Whittle later found on the beach at St. Peter's, Cape May Point. Now, a quick update, the white-winged gull at St. Peter's is, apparently, a Glaucous Gull. Also there were the two Tree Swallows that have been lingering in the area since before Christmas. Updates to come.
Posted by Tony Leukering at 11:05 AM