A Weekend of Winter Warmers

This weekend just past saw a merry band of us out and about around cape May for our Winter Warmers workshop - and boy did we need those warmers! You would think that spending two whole days in temperatures that never once got above freezing point (coupled with a keen wind most of the time) would be off-putting - and you would be right! But we persevered and had some wonderful birding moments. Saturday morning started with an adult Bald Eagle as pretty much the first bird of the weekend and continued with a party of 12 Snow Buntings which alighted in the middle of the parking lot. Continuing with close comparisons of Lesser and Greater Scaup along with amazing close views of the wintering Dickcissel, the day was turning out well! Our second day along the barrier islands provided similar great experiences with plenty of shorebirds to study, including four Marbled Godwits in an American Oystercatcher roost and wonderful close views of both Red-throated and Common Loons. Though Avalon appeared to almost completely devoid of seaducks, we nevertheless had excellent close views of displaying Long-tailed Ducks and spectacularly close Purple Sandpipers. Add onto that all the other winter wonders that came our way and we certainly all went home happy!

The great thing about birding, of course, is that every day, month or year is different to those that went before and you just never know what is going to happen next. Since my last post (time flies when you are busy!) there has been a nice range of birds reported, the presence of which could certainly be attributed mostly to the mild winter we having (at least up until last Saturday!). Sam Galick reported an Osprey passing over Middle Township on 13th, Vince Elia found a Tricolored Heron at Bivalve in Cumberland County on 14th and the Bell's Vireo was reported at The Beanery again on 15th - along with an over-wintering Yellow-breasted Chat. An Orange-crowned Warbler has been reported on several occasions along the red trail in Cape May Point State Park, though generally remains elusive and two Tree Swallows are currently moving around Cape May Point, mostly in the St Mary's area. Also riding out the cold weather of the weekend was our female Rufous Hummingbird at our Center for Research and Education at Goshen. 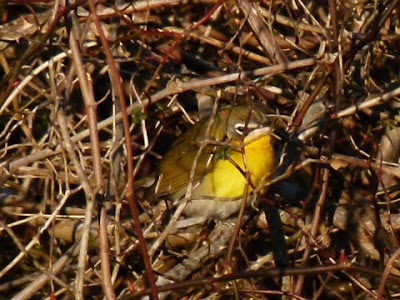 Yellow-breasted Chat in a typical thick tangle at The Beanery [photo by Roger & Kathy Horn].
Reports from further afield include a Golden Eagle at Brigantine on 14th, two female King Eiders at Barnegat Light, a Short-eared Owl at Jake's Landing on 15th and a few Rough-legged Hawks around, including two at Tuckahoe WMA (Corbin City side) and three at Mott's Creek near Brigantine.

Finally, back on the 'you never know what you are going to see when you get up in the morning' line, Karl Lukens had a young Red-headed Woodpecker in his yard on 15th - an intriguing record south of the canal for this time of year. At least four and perhaps as many as seven of these birds are being reported regularly from Cox Hall Creek WMA so maybe they're moving around a bit more with the changing weather. 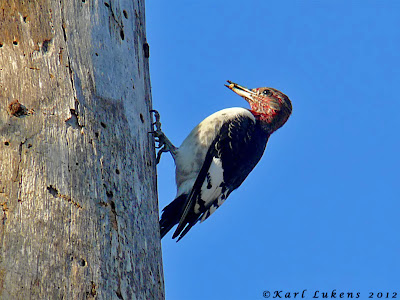 Red-headed Woodpecker at Cox Hall Creek WMA. The birds at this site are displaying interesting caching behavior of pieces of wood... [photo by Karl Lukens]. 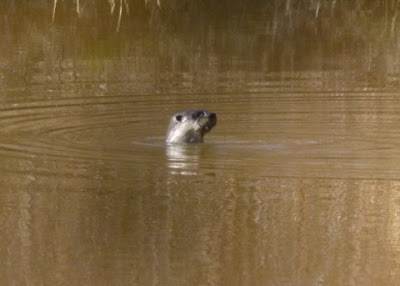 River Otters are rare in Cape May County and most sightings from birders probably involve  just one or perhaps two family units. This individual was at Cox Hall Creek recently. [Photo by Roger & Kathy Horn]
Posted by Mike Crewe at 12:25 PM