It was a day of fine weather today with sun and mostly cloudless skies at the point - as well as a good number of birders out in the field it seems! Though temperatures were only around 48F with a cooling breeze, it was much warmer in sheltered corners and there was certainly a feeling of spring in the air. Cape May Point State Park was the place to be today with the lingering Yellow-breasted Chat and Orange-crowned Warbler being joined by Nashville Warbler and Common Yellowthroat. I also heard tell of two Short-eared Owls reported from there early morning. A Pacific Loon was found by Jim McConnell at very close range at St Peter's on 26th but unfortunately the message didn't get out to active birders, though Jim did report the bird promptly. This is the first record of this species at Cape May that wasn't a brief seawatch fly-by so there's many who will be hoping that it resurfaces...

January 27th saw an Eastern Phoebe appear at the Willow Pond at The Beanery and both Canvasback and Eurasian Wigeon were at the Corbin City Impoundments. Back to today though, and what was most interesting was that Tom Reed reported another Nashville Warbler at the Mauricetown Bridge - two in one day - are they moving? What is presumably the male Eurasian Wigeon that had been in the state park until the turn of the year was found at Pond Creek Marsh lunchtime and finally, a little further away but of interest, two Iceland Gulls were reported from Barnegat Light this afternoon. 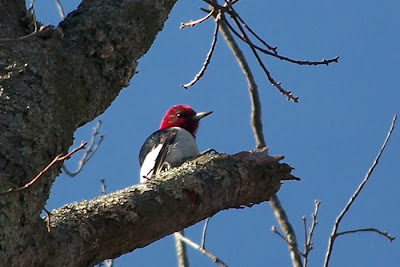 Red-headed Woodpeckers continue to be reported from Cox Hall Creek WMA, including this smart adult [photo by Debbie Hudson]. 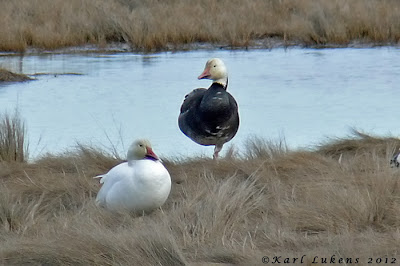 A fine portrait of the two color morphs of Lesser Snow Goose. The darker form - often called a Blue Goose - is most common in eastern populations of the Lesser Snow Goose. Though it occurs in the Greater Snow Goose too, it is much less common in that subspecies, whilst 'blue' Ross's Geese are rarest of all. These two birds were photographed by Karl Lukens at Brigantine recently. 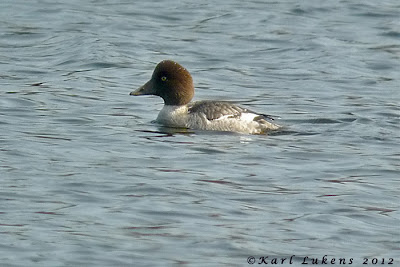 This female Common Goldeneye spent three days on Lake Lily this week but was not reported today.
Posted by Mike Crewe at 5:33 PM