Lake Lily at Cape May Point continues to provide both visiting and resident birders with some great viewing experiences. Though duck numbers have dwindled this past few days, the first-winter Common Merganser continues to hang out there and what appears to be a genuine Cackling Goose (as opposed to the small, but larger-billed bird that has also been around) was present today. A Tree Swallow flew over the lake lunchtime and was perhaps one of two seen shortly after along the beachfront near Harvard Avenue - where the male Dickcissel continues to consort with the House Sparrows. Two Tree Swallows were also in the area on 11th.

Two Glossy Ibises appear to be overwintering at the South Cape May Meadows and get reported periodically, while today produced a fairly major Tundra Swan movement, with Chris Vogel reporting 10 over the point late morning, Michael O'Brien noting 50 west over Stevens Street and Tony Leukering reporting at least 70 heading west to the north of Miami Beach on the bayshore.

Along the bayshore, a Black-headed Gull continues to be reported sporadically in the North Cape May area (today off Beverly Road in Town Bank) and Tony Leukering totalled 295 Bonaparte's Gulls and seven Forster's Terns at Miami Beach on 11th. Tom Johnson sneaked back into the area today I discovered, by virtue of the fact that he reported a light morph Rough-legged Hawk near mile marker 21.2 on the Garden State Parkway. Perhaps most surprising is the continued reporting of Monarchs, with one noted in flight by Michael O'Brien at the point today. 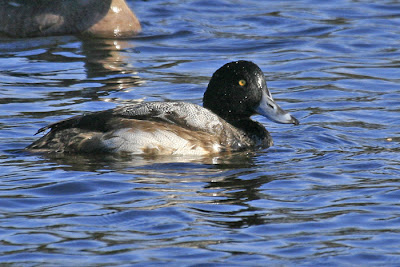 First-winter male Greater Scaup on Lake Lily. This can be a tough bird to pick out amongst Lesser Scaups, as many of the oft-quoted field features (such as more rounded head, color of sheen on head etc) can be subjective and often affected by light conditions and the birds behavior. One reliable feature when seen close enough is the color of the tip of the bill. On Greater Scaup, the black of the nail at the very tip of the bill spills over onto the bill sides a little and can just be made out here. [Photo by Mike Crewe] 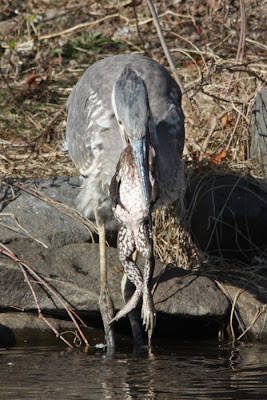 First-winter Great Blue Heron enjoying Bullfrog - a local delicacy at Lake Lily! Herons are hardened predators and will eat a very wide range of animals, including mammals and birds [photo by Beth Polvino]. 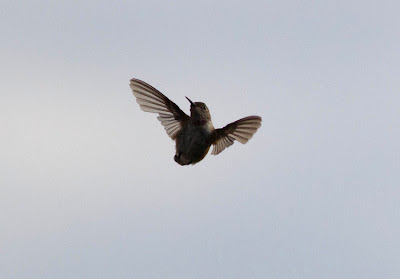 Despite some pretty frosty nights, the two Rufous Hummingbirds being reported from CMBO's Goshen Center and along New England Road in Lower Township continue to hang tough. If the truth be known, however, the New England Road bird (seen above) has so far evaded the best attempts to confirm it conclusively to species [photo by Tony Leukering]. 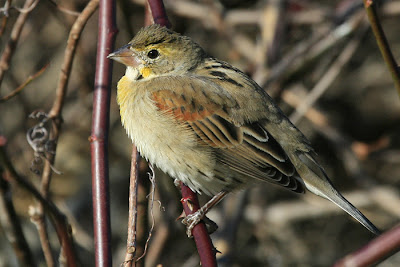 This male Dickcissel has become very confiding along Harvard Avenue, usually on the corner of the vacant plot at the intersection with Whilldin Avenue [photo by Mike Crewe].
Posted by Mike Crewe at 4:42 PM