Somewhere in the dark depths of our overwhelming desire to have everything orderly, organized and explained, we feel the need to categorize and label the days, the months, the years. Of course this makes sense; we need reference points by which we can arrange to meet each other ("Let's meet up again next Thursday at 10:00am to continue this discussion") and reference points by which we can record history ("Christopher Columbus arrived in North America in 1492"). But though it would appear to be pretty straightforward to define a day, and maybe even a week or a month, defining a year seems far more tricky.

What am I babbling about? Well, I had a short conversation with Will Kerling yesterday lunchtime and we touched on the issue of exactly when the old year ends and the new one starts. And we meant in the context of natural history; in other words, the wildlife's clock, not ours. What had inspired this conversation? Essentially, this winter's weather. Wildlife neither knows nor needs such rigid calendars as ours. Animals and plants live their lives day by day, responding to conditions on a daily basis, which can result in some real puzzlers for us as we try to work it all out. Yes, the shortest day of the year for those of us in the Northern temperate zone falls in mid- late December, but the coldest, darkest days of winter probably occur in late February for most of us here. So when exactly does the wildlife 'turn around'?

In essence we have a complete overlap of wildlife events and Will and I were drawn to this by the Orange Sulphurs that are flying around the Wild Radish at Cape May and by the Skunk-cabbage flowers that were already blooming by December 12th. In our rigid world, we would record the butterflies as the 'first of the year' and yet, as Will pointed out, they are still flying from last year, they haven't stopped yet. In contrast, the Skunk-cabbage may be recorded as our last flower of the year, and yet it is actually the first, as Skunk-cabbage pushes its sinister maroon flowers up well before its leaves unfurl.

Such apparent contradictions in the natural world are of course all part of what makes it so fascinating and with trends in regional weather patterns well-recorded as being on a long-term shift (so-called climate change), recording such events is an extremely useful way to record such long-term changes. So what's happening in your part of the planet right now?! 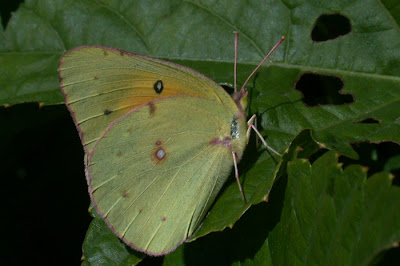 Orange Sulphurs readily survive a mild winter and will continue to do so as long as their is nectar available from introduced plants in gardens and fields. (This one was photographed back in September when the leaves were still green!) Such species of butterfly are actuall continual-brooded in the south where food is available all year, so don't really have a start and an end to their year [photo by Mike Crewe]. 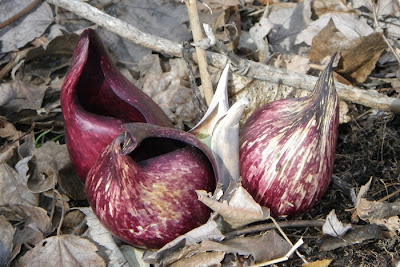 The somewhat sinister dark purple-maroon flowers of Skunk-cabbage are out in the woods right now. Look for them in wet, shady areas along streams. [Photo by Mike Crewe]

Water is essential right now
Though the winter in Cape May has so far been relatively mild, we have still had a few spells of consecutive days with temperatures below freezing. During such periods, it is very difficult for animals to get water - particularly when there is no snow to eat as a substitute. Do make sure that if you feed birds you provide them with a source of water during such periods. This may mean regular trips into the garden to replenish frozen birdbaths (and remember that electrically-heated ones are not environmentally friendly!) but our little feathered friends are worth the effort aren't they? 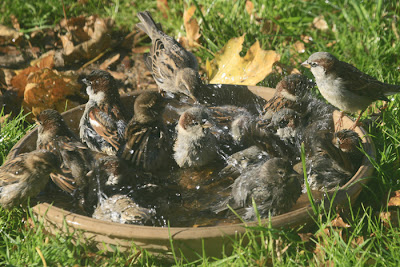 I filled our birdbath recently and within minutes counted 18 House Sparrows in it (here just 13 and a cowbird)! It took them less than six minutes to completely drain it - most of it finished up on the grass - and they clearly were in need of a good drink and a rinse. [Photo by Mike Crewe] 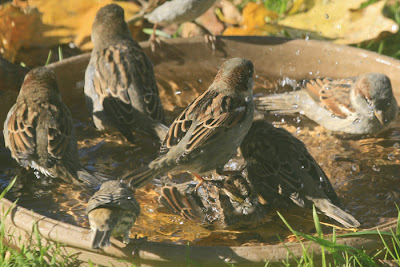 Who says House Sparrows are bullies? Well, as a Brit, all I can do is apologize for the behavior of my compatriots. Yes, this male House Sparrow really is standing on top of the only White-throated Sparrow that braved a dip in the tub! [Photo by Mike Crewe]
Posted by Mike Crewe at 9:57 AM