Well, whilst I was up enjoying the delights of coastal Massachusetts in February (Snowy Owl, Northern Shrike, Black Guillemots, Razorbills - you know the kind of thing!) with some of our wonderful volunteer field trip leaders and assistants, it seems that Cape May birders were out and finding all sorts of things. Here's a summary of the past few days since my last post.

February 1st saw a Black-legged Kittiwake reported by Glen Davis off Sunset Beach, two Palm Warblers noted by Will Kerling at the Cape Island Preserve and a pair of Harlequin Ducks found by Gail Dwyer by the southernmost stone jetty at Stone Harbor Point. A couple of hours later, the two Harlequin Ducks - or perhaps more likely another pair - were at the 8th Street jetty in Avalon and a Razorbill was also present there. Of greatest interest to local birders will be the report of a Western Tanager at Cape May Point State Park on February 2nd and a further report from the same site today. The report today came from the western end of the blue trail near the metal bridge, not far from where the trail breaks off from the red trail loop. This is presumably the bird first seen at the point on January 25th.

The relatively mild winter continues to turn up birds that one would normally expect to be further south at this time of year; a Glossy Ibis at the South Cape May Meadows, Little Blue Heron at the Coastguard Ponds/Two-mile Landing area and a male Blue-winged Teal at the state park are the most recent hangers-on to be reported. Up to seven Green-winged Teal have been in the meadows too, most recently reported by Will Kerling on January 22nd. In stark contrast is the almost complete absence of what might be considered 'hard weather birds'. Glen Davis mentioned a couple of fly-over Common Redpolls at the state park a few days ago which remains a very rare bird this far south this winter. Records reported to ebird for this year so far show just two sightings in North Jersey and a couple of singletons to the south of us on the Delmarva Peninsula. Similarly, last winter's glut of Pine Siskins is in stark contrast to a mere five reports this year so far for New Jersey as a whole and I only know of two reports from Cape May County - thanks to an email from Cynthia Allen in Cape May Court House, who had one at her feeder on February 2nd. Such short-term trends are the norm for birds that move in response to food availability and mean very little at the local level. This is where adding your sightings to the bigger picture via ebird come in handy - so don't forget to get on line!!

Some recent photos are crying out to be revealed to the world, so here they are: 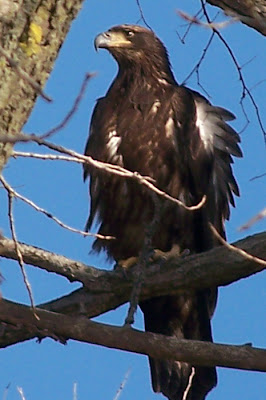 Debbie Hudson got amazing views - and photos - of this young Bald Eagle at The Beanery recently. Its dark brown underparts show it to be a bird still in its first cycle of feathers and thus likely to be one of the three youngsters that fledged last year from our south-of-the-canal list. Learn more about bird molt and plumage on our workshop on this very subject in August. 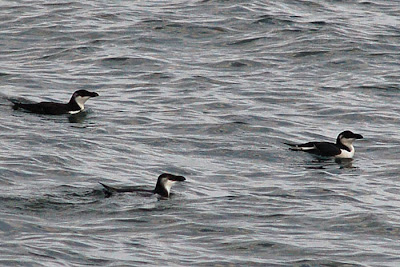 Razorbills are pushing south in good numbers this year and many are coming close to shore. This trio of birds was enjoyed by Pat & Clay Sutton at Townsend's Inlet on February 2nd. [Photo by Pat Sutton] 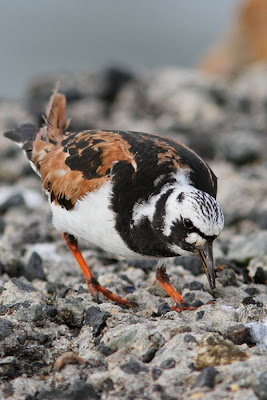 Another object of interest to students of molt and plumage. This Ruddy Turnstone - photographed just a few days ago at Avalon - is clearly in breeding plumage. Such oddities crop up from time to time and often we can only speculate as to what is going on I would guess, from the rather heavy wear on the tertails and wing coverts, that this bird has retained last summer's feathers, rather than obtained next summer's early but maybe it's just ended up completely 'the wrong way round', so its plumage reflects late summer rather than late winter... [photo by Beth Polvino] 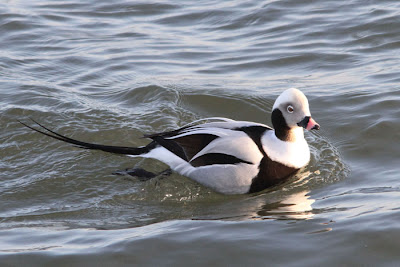 Who can stop photographing Long-tailed Ducks? They are magnificent birds and they're right into the midst of their courtship right now - and what fabulous sounds they make! Don't forget our Longtails in Love program, fast approaching on February 18th. [Photo by Beth Polvino]
Posted by Mike Crewe at 3:00 PM