Well, we made it through the first day of the count and we didn't do too badly! Goshen's Rufous Hummingbird dutifully made it onto their list, though I hear the feeders were a little quiet today - so more help needed tomorrow! Down at the Northwood Center, we were let down by our Dickcissel today but I am sure she's still out there and just waiting to be found over the weekend - so come and give us a hand! Lake Lily gave us an edge with a few ducks that we could add to our list, uncluding the male Eurasian Wigeon which showed up late afternoon. I am sure this is the bird that turned up last fall but it has been so elusive of late that this is actually the first time I've seen it this year! We finished the day on a high as an adult Bald Eagle cruised by just as Gail was about to turn the Closed sign on the door. Tomorrow is another day!

Not much news from elsewhere locally at the moment, though I did hear that Tom Reed had a Golden Eagle flying over Seashore Road in Erma on 15th and Tiffany Kirsten reported 40+ Snow Buntings on the South Beach on 15th. 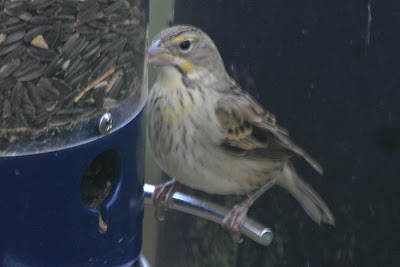 Right at the eleventh hour! So here I am posting that our Dickcissel hasn't shown today and right at the last knockings she appears, just in time to get on the blog. Not the best Dickcissel photo in the world - but hey, it is at our feeder! 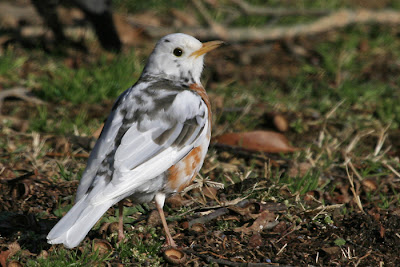 Being on the subject of backyard birds reminded me that I photographed this startling apparition on a front lawn in Cape May Court House on February 9th. If you saw this on your lawn would you know what it was? Would there be a picture of it in your field guide? Try the next picture... 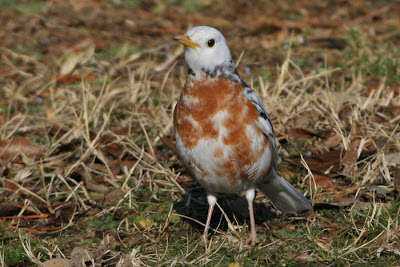 It may be a little more apparent now, what with all that red. It's an American Robin with only half a mind to be white! True albino birds are very rare and such individuals have no color pigment at all, even having red or pink eyes. The bird in the photographs is what is technically known as partially leucistic. It has some normally-colored feathers and some that are completely white. Such plumage patterns can be caused by a variety of things, varying from an inherited genetic trait to problems with a number of stress-related issues that may occur when the feathers are first forming. Partially leucistic birds are suprisingly common among some species; if you look carefully at an average flock of say 40-50 House Sparrows, chances are that at least one of them will have an odd white feather somewhere, often in a wing or in the tail. Leucistic birds may also have color pigment washed out, providing pale, fawn or beige-colored feathers. [All photos by Mike Crewe]
Posted by Mike Crewe at 5:18 PM