SPRING!!! Really? Are you sure?

What a strange year this is already turning out to be. A remarkably mild winter has produced some fascinating sightings already - and today maybe really laid down the foundation upon which an exceptionally interesting spring may be built. Don Freiday kicked off the 'Best Bird of the Year' competition with the discovery at 2:30pm of a Western Grebe on the Delaware Bay, floating quite quickly southward past the ferry terminal on an out-going tide. Many local birders managed to get at least some sort of a glimpse until the bird was eventually lost to sight well south of St Peter's, off Cape May Point. Perhaps this bird wasn't quite so unexpected, as there has been a Western Grebe on the Delaware off Lewes for some time now and perhaps this may even be the same bird. But it's still a great find for Cape May County and, if it passes muster through official channels, it may well become the first, multi-observer, fully documented record for the county.

Though a great highlight of the day, this bird was actually the icing on the cake after what had been an action-packed morning. Roger and Kathy Horn walked the Rea Farm and turned up a whole host of great birds, including a singing Eastern Meadowlark, Horned Lark, Eastern Phoebe, Rusty Blackbird and Wood Duck, but the real startler was a Barn Swallow seen at the Willow Pond. I haven't yet had time to research more recent records, but Sibley's Birds of Cape May lists March 9th as the earliest date for Cape May for Barn Swallow so this is a really noteworthy find. Perhaps equally noteworthy was a female Purple Martin at the point, seen on several occasions around the state park/St. Mary's/Coral Avenue area. Though the date is not a record-early one (Sibley gives February 22nd), what is very surprising is that today's bird was a female. Typically, male Purple Martins head north first, often arriving around 10 days ahead of the females, so this bird was a real surprise. Yesterday had produced reports of several Tree Swallows, including at least six at the point and five at Beaver Dam in South Dennis, so a few more today was perhaps not too surprising. Karen and Brian Johnson reported nine Tree Swallows (as well as 150 Ring-necked Ducks) at Tarkiln Pond on Weatherby Road today - a site not much visited this time of year. Also up at the 'top end', a male Eurasian Wigeon was reported from the Corbin City section of Tuckahoe WMA. Finally, (though actually reported first today!) a Pine Warbler was at Cox Hall Creek WMA.

Aside from birds, other sightings were a little thin today as, despite cloudless blue skies, a chilly wind kept temperatures lower than had been hoped. Nevertheless, Wood Frogs were in evidence at Beaver Dam and both Mourning Cloak and Orange Sulphur were noted at the Rea Farm. 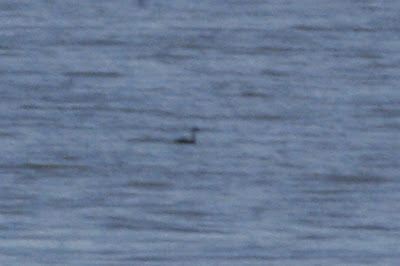 The Oscars were awarded tonight, but I don't think this picture will win the award for best photography! Western Grebe (honest!) off Sunset Beach. [Photo by Mike Crewe] 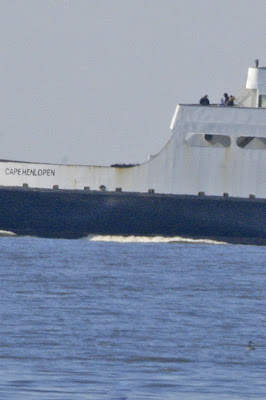 Just to put it into context - spot the Western Grebe (bottom right corner) with the Cape May-Lewes ferry passing by! [Photo by Mike Crewe] A fine example of how a 400mm lens can't compete with the viewing power of a good scope, which gave me roughly the equivalent of a 6000mm lens so allowed for better views than could be achieved through the camera!
Top tip for tomorrow? Laughing Gull at the ferry terminal or Miami Beach - I'm guessing that's why Don was there today!!
Posted by Mike Crewe at 12:40 AM