A complete turn around

My last post, being titled 'Mild Weather Continues' seems to be somewhat at odds now as I look out of my office window at the remnants of the weekend's snow! Yes, these past few days have seen one of those nasty moments that February can through at you as a belt of cold weather whistled through our region - sadly just in time to hit all those who turned out for the Cumberland Eagle Festival on Saturday. The festival was a great day out though, despite the cold weather and, if we're honest, it could have been a lot worse! Eagles were there to be seen in good numbers and I saw endless smiling faces and heard many stories of great eable adventures on the day - the one that flew right overhead so close you could hear its wings beat; the one perched almost shoulder to shoulder with a Red-tail; the pair that flew out and put all the Snow Geese up. It was a great day out and personally, I also enjoyed watching a courting group of two female and four male Common Mergansers and ending the day with the cat-like silhouette of a Great Horned Owl, hunkered down on its nest but framed nicely in the scopes for those who came to the Owl Watch at Turkey Point.

The Cape May hotlines have certainly been luke-warm this past week, but that is often the way in February. The Glossy Ibis continues to commute between the state park and the meadows and the male Dickcissel was present at Harvard Avenue at least at the weekend, though has been more elusive of late. The female Dickcissel continues to put in erratic appearances at the Northwood Center feeder and was last reported on 12th. Other recent sightings I have heard of by way of email include an American Moorhen at the South Cape May Meadows on February 7th and a Pine Warbler at Jake's Landing Road the same day, both reported by Derk Visser. I also just heard of an Osprey at the Meadows, reported to me just a few moments ago by Bob McClennen. All interesting sightings and all indicative, I feel, of the generally mild winter we've had - in stark contrast to the snow in North Africa!! 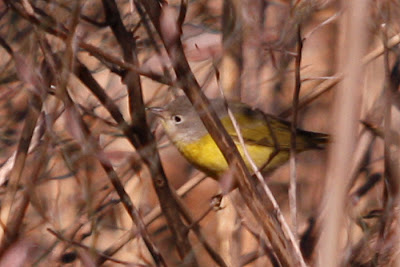 This Nashville Warbler was originally found at the Mauricetown Bridge by Tom Reed on our Wintering Eagles, Hawks & Owls workshop in late January and was still present on Februarly 10th at least. Michael Flemming did a good job capturing this image of it during our second workshop on February 9th, as it flitted ceaselessly through the riverside vegetation. 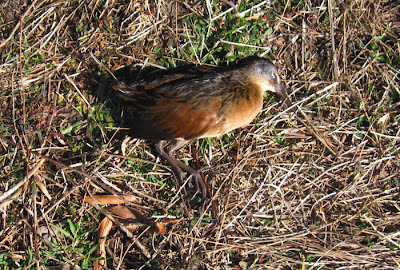 James Cremer sent me this photo of a freshly dead Virginia Rail at Green Creek on Monday. Sadly, sudden freezes like the one we just had can be bad news for wetland species that struggle to find food when their habitats become temporarily inhospitable.
Coming Up!
Just a few days left for you to book a place on our Longtails in Love walk this coming Saturday - I thought it was appropriate to mention it on St. Valentine's Day! Long-tailed Ducks are at full cry in the backbays and inlets right now and I really would recommend a visit with our great team of naturalists who know all the best places to find these and all the other ducks that are cooing and getting jiggy with it right now! 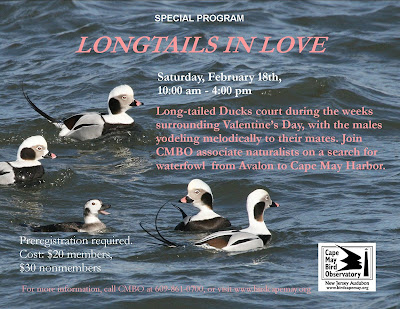