The weather has been improving on a daily basis this past four days or so and, though we look set to get something of a deterioration shortly, it has certainly been nice enough to get people outside and looking for birds. Sunday proved to be a short-lived wonderment of early arriving migrants as Monday failed to come up with the goods. The best that Tony Leukering and I could muster was a nice count of 41 Tree Swallows and one Barn Swallow at Tarkiln Pond. Interestingly, not a single Ring-necked Duck remained from the day before, so they are certainly on the move now. Belatedly, I hear that at least six Snow Buntings remain on the beach at the state park so do keep an eye out for them.

I came back to the office today to a nice mixed bag of emails, many of which contained some great photo highlights from the weekend, so here's a few of them. 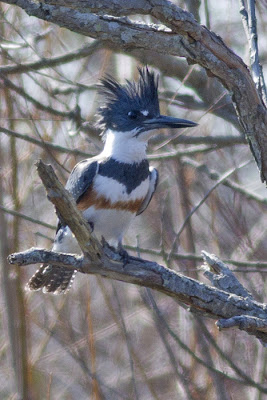 Belted Kingfishers are becoming more noticeable now as they return to favored ponds in our area. Several sites currently hold noisy, calling birds, including this one at The Beanery [photo by Sam Galick]. 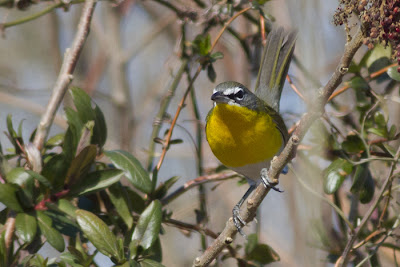 The Yellow-breasted Chat remains elusive but still present at the state park. It's best looked for around Winged Sumac fruits (you can just see some in the top right corner here) on the red trail. [Photo by Sam Galick] 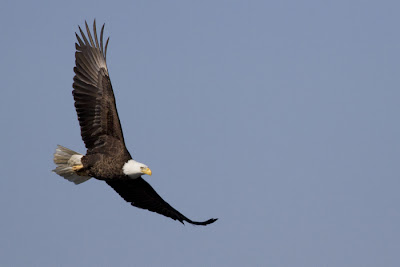 Adult Bald Eagles always make fine subjects for a photo-shoot if you can find a cooperative one. This bird was trying to catch American Coots on Lighthouse Pond at the state park. [Photo by Sam Galick] 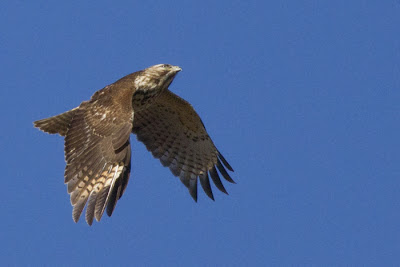 Warm weather gets the raptors up once the thermals start rising. This young Red-shouldered Hawk was circling with nine Red-tailed Hawks and 26 Turkey Vultures over the state park on Sunday. [Photo by Sam Galick] 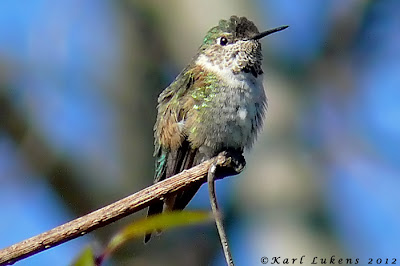 I was surprised to receive this picture from Karl Lukens as I had no idea that this bird was still around! It's the Selasphorus hummingbird from Batts Lane, off New England Road (taken on 26th) which has presumably been present all winter now. 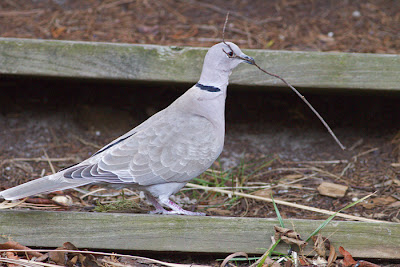 I received this photo in an email simply headed 'Uh-oh'. Here we have the first real sign that Eurasian Collared Doves are finally here to stay in Cape May. This bird seems set on nest building so, provided they don't all turn out to be boys (or girls!) it looks like we could be ticking them off annually from now on. This species has been a remarkable success story, colonising the whole of Europe in roughly 30 years from Turkey to the UK and even Iceland and is now steadily taking over North America. It does appear to be surprisingly benign and this is perhaps largely due to it favoring man-made environments and thus not being a threat to other local bird species. [Photo by Scott Whittle] 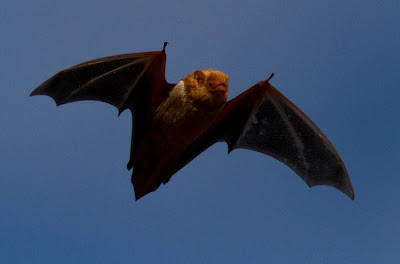 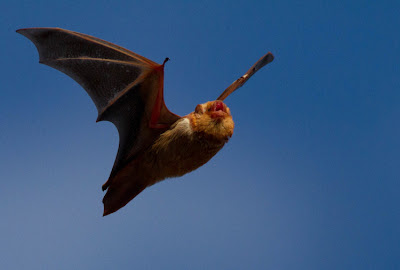 Tony Leukering and I had one of our 'up-county' adventures on Monday and our findings included this fabulous Eastern Red Bat. We watched it for some 20 minutes, hawking insects along a dirt road in bright sunshine and Tony's superior equipment to mine (and superior skills of course!) ensured he outshone me with these awesome photos. We eventually lost the bat when a Sharp-shinned Hawk swung in to catch it. We managed to scare the hawk off (I know, I know, interfering with nature etc. etc. etc!) but the bat decided it was time to head off elsewhere.
Posted by Mike Crewe at 2:51 PM