Will Kerling was a very happy person this lunchtime and I was there to see it. Having doggedly followed Orange Sulphur butterflies right through this mild winter that we have been having, we got to the point of wondering whether last year's crop of Orange Sulphurs would make it right through until this year's adults started arriving from the south. Well, today we got our answer, for today, Will pulled up sharply as we were walking across a grassy field and pointed out to me an Orange Sulphur. Not that surprising up to this point as we were at this field for the very reason that we had been seeing Orange Sulphurs there regularly through the winter on sunny days. The big surprise came when I got in close for photos and discovered that this was something new. This was a freshly-emerged female with wings that hadn't even finished drying out after emergence from the chrysalis. This was to become the first New Jersey butterfly of 2012. Not one that had survived from last year, it had emerged in 2012 - today! To put this into context, Glassberg's Butterflies Through Binoculars: The East lists Orange Sulphur flight times as beginning in late March for North Carolina and mid April for New York. 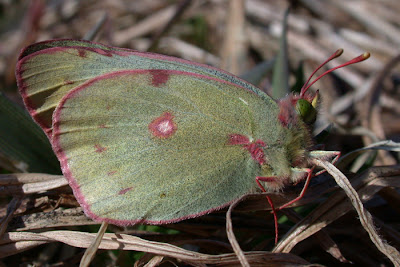 Freshly-emerged female Orange Sulphur. The edges of the wings look corrugated and soft as the veins haven't dried out and hardened yet [photo by Mike Crewe].
This early-emerged Orange Sulphur would be reason enough to celebrate today, but even better was to come! On an old railbed nearby and just a short time later, we flushed a small, dark butterfly. We thought of Jimmy Dowdell's American Snout that had been seen not far away in January, but a pale line across the wing like a tiny Red-shouldered Hawk gave it away - a Common Buckeye. A Common Buckeye? This species is not known to overwinter regularly north of south Georgia. The butterfly landed and we were even more amazed. This wasn't a worn butterfly that had successfully kept itself fed through a mild winter. This wasn't even a reasonably fresh butterfly that had pushed up very early from the deep south. This was a crisp, slightly bendy-winged (just like our sulphur) just emerged locally from the chrysalis individual! A truly amazing find and, as far as we know, the first ever record of this species in New Jersey in February. Will was over the moon; have you ever seen a grown man skipping? It's not a pretty sight!! 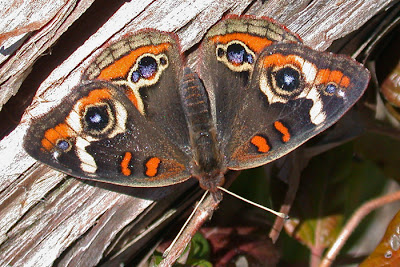 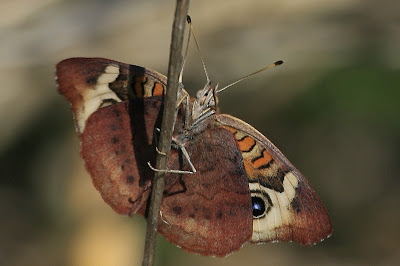 Topside and underside of today's Common Buckeye. Typically for an individual that has been through cold conditions, it was very much on the small side and washed with dark colors. In the top picture, note also the atypical spot patterning on the hind wing. Common Buckeyes usually only have two eye spots on each wing (the largest of which is hidden by the forewing here) but this one has four, having two extra, small spots [photos by Mike Crewe].
Recent Sightings
Bird sightings were on the up today as we head into a holiday weekend; the male Eurasian Wigeon was again on Lake Lily, as was a Cackling Goose and the female Common Goldeneye. The female Dickcissel continues at the Northwood Center feeders but there has been no news of the Harvard Avenue bird for at least a week now - though I hear there are no House Sparrows there at the moment so maybe it has moved elsewhere with the sparrow flock. Don Freiday reported an Orange-crowned Warbler and Common Yellowthroat in the state park today, the former where the red and blue trails split off, the latter further along the blue trail. Don also heard a Dickcissel flying over so they are certainly in the news right now. I also heard a secondhand report of a Nashville Warbler in the state park this afternoon, which I guess is the same one that was reported a while back at the same location. The regular Glossy Ibis was on Lighthouse Pond at least in the morning and Will Kerling showed me photos of a Snowy Egret that he had photographed in Avalon this morning.
At Northwood, the warming, sunny weather caused raptors to get up and test the thermals with at least nine Black Vultures, 10 Turkey Vultures, two Red-tailed Hawks and a Red-shouldered Hawk circling round and causing me to check the calendar...!!
Posted by Mike Crewe at 5:27 PM