The mild weather that has been such a feature for us this winter continues - and continues to provide us with quirky bird sightings! The single Glossy Ibis continues to be reported on odd occasions from either the state park or the South Cape May Meadows, but probably spends much of its time in those little tucked away corners that we can't get to. The Cackling Goose also continues to commute between Pond Creek Marsh and Lake Lily on a regular basis with the local Canada Goose flock and our local pair of Bald Eagles seem to be on regular sorties around the point, stirring up the ducks at the moment. I have to say, they do seem restless at present and currently don't seem to be thinking of settling down on a nest - but there is still time. At least one Orange-crowned Warbler continues at the state park, usually seen on the red trail or on the first 100 yards or so of the blue/yellow trail. Subtle plumage differences suggest there may be a minimum of three different Orange-crowneds in the state park at the moment. On the 4th, Glen Davis came up with the latest surprise bird of the season with a Brown Pelican which settled for a short time on the water just off St Peter's, before heading off east. Almost exactly an hour later, Dave Lord reported what was presumably the same bird off North Wildwood, heading back south. I've heard of no further sightings so far.

A large influx of Razorbills off the coast of North Jersey seems to have just about trickled down to us with one or two sightings locally of this species. Most notably, Dave Lord reported one on the channel to the west of the toll bridge at Nummy's Island on 4th and three birds were again reported from Townsend's Inlet on 5th. This is an annual winter visitor off Cape May but appearances are unpredictable and often involve birds simply passing by offshore, so if you are looking for one, you need exactly the right combination of luck and patience!

Finally, the female Rufous Hummingbird continues to entertain visitors to the CMBO store at Goshen on route 47, to February 7th at least. 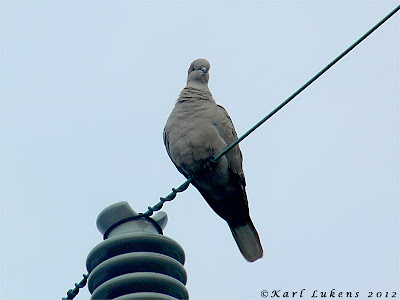 Will Eurasian Collared Dove finally stay and breed with us? The three birds that turned up last year are still hanging out along Whilldin Avenue, so it seems we may soon be adding Cape May to the long list of sites conquered by this tenacious species. 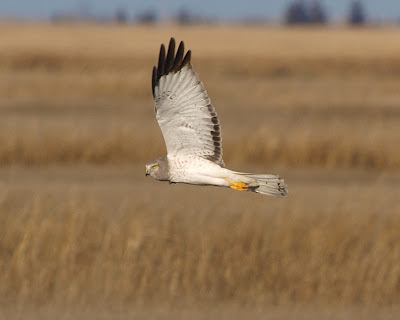 This great photograph of a male Northern Harrier was taken at Nummy's Island on February 3rd by Sean McDermott and is a wonderful study of the 'Gray Ghost' in action. Nummy's Island offers excellent opportunities to bird from the car in the winter and, if you are really lucky, you can get opportunities like this!
Dont forget the weekend:
Saturday February 11th is the day of the Cumberland Eagle Festival and we look forward to seeing you there! We will be there with a CMBO stand at the Mauricetown Fire Hall, as well as having our team of great volunteer leaders available at the four eagle watchpoints throughout the day. Do come along and enjoy a great day out - there's even indoor lectures to go to if we get a short burst of rain. See you there!!
Find out more about the Cumberland Eagle Festival here: http://www.facebook.com/wintereaglefest
Posted by Mike Crewe at 9:49 AM