Nearly a whole week has passed since I last had time to post - so humble apologies to regular readers! Though birding has generally been quiet this past week, I have received some interesting photos from a unmber of people so I'll share some of them here. But first a bird and wildlife update ready for the coming weekend:

The past week has seen a continuation for a number of wintering individuals around Cape May Point, including the Glossy Ibis, male Eurasian Wigeon and Cackling Goose - with perhaps two of the latter around. A little further afield - but not by much! - I hear that the Western Grebe is still present (to 21st at least) near the ferry terminal at Lewes, Delaware. If only the curve of the earth didn't prevent us from scoping it from here! The first 'new' bird of note came on February 22nd with a male Wood Duck on lake Lily, reported by Karl Lukens - and duly scoped from the Northwood Center. With spring not too far away now (see below!) attention is rapidly turning to the Bayshore side of the peninsula and regular checks at Miami Beach by several observers have turned up a Black-headed Gull there, as well as a rather surprising count of 66 Red Knot there on 23rd.

The weather is see-sawing a little at the moment and, though continuing relatively mild, gray skies and light rain are currently slowing things a little. Northern Gannets and Red-throated Loons are starting to build off Sunset Beach I hear, the female Dickcissel has been more co-operative and enjoyed by several visitors at the Northwood Center today and the female Rufous Hummingbird still hangs out up at Goshen. But the forecast for the weekend doesn't look too bad, especially Sunday, so let's see what the weekend brings! 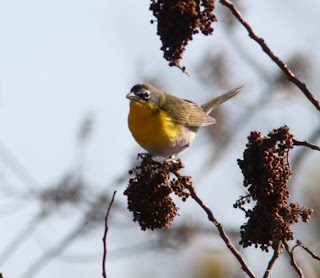 This photo from Beth Polvino, taken at the state park on 21st, alerted me to the fact that the overwintering Yellow-breasted Chat is still present there. I hadn't heard of any sightings of it for a while but looks as though it is still finding plenty of Winged Sumac fruits to eat! 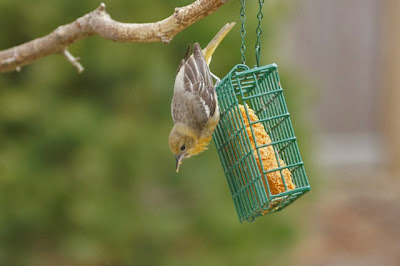 From West Creek, up near Tuckerton, Wayne Morley sent me this great picture of a Baltimore Oriole that has been coming to his suet block this winter. It's been a good winter for this species in South Jersey with a higher than average number of sightings throughout the last three months or so. What I want to know though is how come Wayne gets an oriole at his suet block and I just get starlings and grackles?! 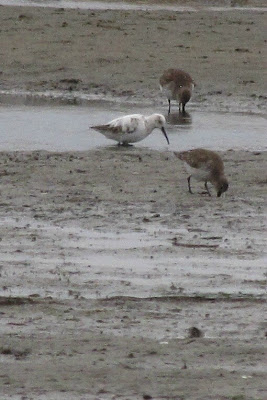 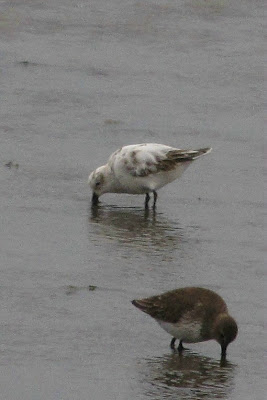 My recent post about leucistic birds, prompted Cindy Ferguson to send me these photos of a leucistic Dunlin that she found at Stone harbor last weekend. Shorebirds can be tough at the best of times, but when they do this to you it really isn't playing by the rules!! Such birds needn't be too tough though and this individual is helpful in not sporting a combination of colors and markings that would make it confuseable with anything else. The overall whiteness might make you think of Sanderling, but the brownish rather than grayish or black wing feathers, coupled with that all too long bill soon put that species out of the frame. 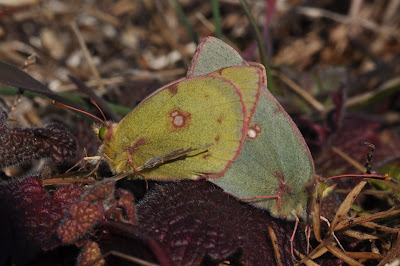 The intrepid Will Kerling continues to re-write the record books! Above, a mating pair of Orange Sulphurs seem determined to get the 2012 season off to an early start... 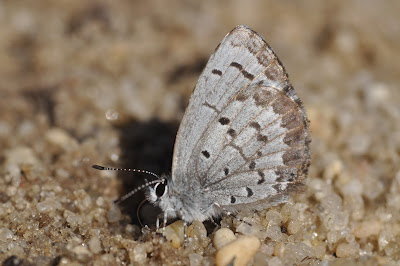 ... while this Blueberry Azure, photographed by Will Kerling at Beaver Dam in South Denis on 23rd, sets another new earliest date for Cape May County. 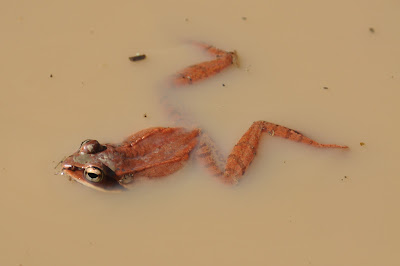 Late February is about the time we would normally expect to start listening for the first frog chorus of spring, so their appearance now is not so surprising. I have been told of Southern Leopard Frogs and Spring Peepers starting to call in the county now, while Will Kerling photographed this Wood Frog (one of three he saw) in South Denis yesterday. On a slightly different note, Keith Seager mentioned to me that he had seen Fiddler Crabs at Higbee Beach yesterday. I don't know much about the timing of fiddler crabs and their movements but I wouldn't be surprised if this wasn't an early date too.
Posted by Mike Crewe at 5:48 PM