It's been a mixed week weatherwise, though not unusual for the time of year; after Tuesday - with its balmy temperatures - produced a spectacular butterfly flight, things took a turn for the worse for insects on Wednesday and Thursday as temperatures dropped again and the insects found themselves grounded. Indeed, it was rather sad to see so many thousands of Red Admirals just too cold and tired to move, being gobbled up by birds or simply trampled under foot. You normally expect a butterfly to get out of the way and in this instance I think that their rather cryptic underwing markings meant they went un-noticed by most people while sitting helpless on the ground. On Thursday at Higbee Beach, we were picking them up off the trails and placing them out of harm's way, but of course these boom and bust populations are part of nature's way of ensuring that the species survives.

Will Kerling, who has been studying butterflies in the USA far longer than me, mentioned to me that this is the biggest movement of spring butterflies that he can remember. Interestingly, I checked up on Red Admiral ecology in the eastern US States in the excellent Butterflies of the East Coast by Cech and Tudor, published in 2005. I was impressed to discover that they had effectively predicted this year's major movement by stating that such large migrations typically occur approximately once every ten years, with previous events noted in 1981, 1990 and 2001. So maybe we could have expected it last year, but perhaps weather trends weren't quite right last spring.

With a warming of temperatures on Friday, butterflies were again in the news and I heard reports from as far away as Asbury Park in North Jersey, as well as throughout Cape May County. Text messages to my phone revealed a very widespread movement with numbers perhaps even more impressive than on Tuesday - Tom Reed, for instance, texting 500+ butterflies a minute passing Stone Harbor Point mid-afternoon. My own observations around Cape May Point were intriguing, since Tuesday had produced a movement largely of Red Admirals with a few American Ladies and Question Marks, but Friday seemed to be largely of the last two species, with Red Admirals in the minority. These movements are of course a successful strategy for the butterflies, which allows them to overwinter in the warmer south and avoid the worst of the cold weather in the north. 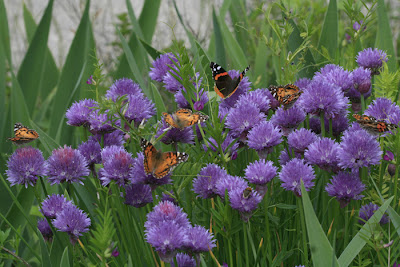 American Ladies and a Red Admiral fuelling up on Chives at Cape May Point [photo by Mike Crewe]. 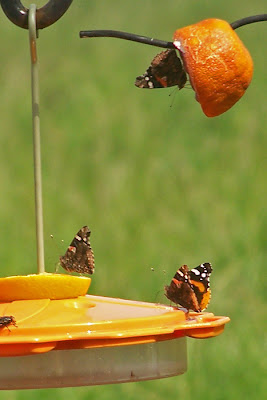 Debbie Hudson sent me this picture of Red Admirals at her bird feeders in Green Creek - which they were having to share with Ruby-throated Hummingbird and Baltimore Oriole!

As well as the butterfly migration, another highlight at the Northwood Center this past 10 days or so has been the Rose-breasted Grosbeaks at the feeders. This species doesn't breed with us here, but migrants stop off each year and just for a short period it is possible to get really good views of what can be a rather retiring species here. Getting up close and personal with birds often gives an opportunity to take birding skills to the next level - so if you are at Northwood, see if you can tell the age of the Rose-breasted Grosbeak you are looking at. Here's some pictures to help you... 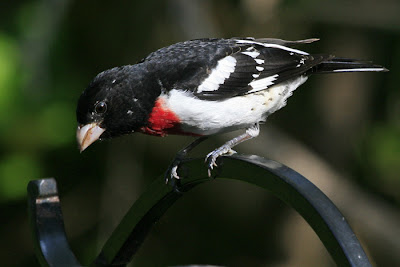 A typical adult male (ie more than 12 months old) Rose-breasted Grosbeak. Note that the wings are solidly black and white with no brown feathers [photo by Mike Crewe]. 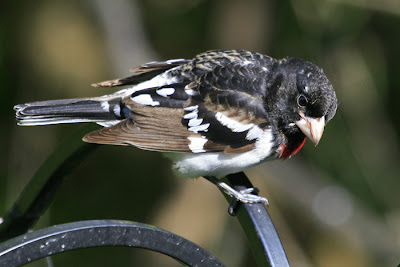 A typical second-year male (ie hatched last year) Rose-breasted Grosbeak. Note that the wings have light brown primaries, secondaries, primary coverts and median coverts. The head and mantle feathers also have brownish tips to them. These wing feathers are retained from the previous year, when the bird would have been all brown and looked very much like a female [photo by Mike Crewe]. Female Rose-breasted Grosbeak. Less showy than the males, the females are nevertheless nice birds. However, since they are always brownish, ageing them can be harder than ageing males and it is not always possible to do in the field. The molt is the same as that of the male so it would be usual to expect a second-year female to show a contrast between paler, more worn primaries and the fresher feathers in the rest of the wing. As this bird generally looks to be in all fresh plumage, I would guess that it is an adult - but in-the-hand would be the best way to check. [photo by Mike Crewe]

Recent Reports
Warblers and other assorted summer arrivals have been in the news here over the last 36 hours or so; locations around Cape May Point and at Cox Hall Creek WMA have all been good for a variety of warblers, with Cerulean and Blackburnian being sighted amongst the commoner species. Warbling Vireo, Yellow-breasted Chat, Wood Thrush and Blue-winged Warbler were singing well at Higbee Beach Friday morning and I hear that over 200 Whimbrel were logged on The Osprey boat trip. One or two reports of migrant Red-headed Woodpeckers are coming in from around Cape May Point, including The Beanery, where both Yellow-billed and Black-billed Cuckoos were seen this morning. Sam Galick reported a Tennessee Warbler from the state park today and a Cape May Warbler was reported from there by Stephanie Brown on 4th.

A White-winged Scoter was reported from the concrete ship on 4th and a Luna Moth became a star attraction at the Northwood Center today as it spent most of the day hanging in a juniper right over the road at the store entrance.