Sooty Shearwaters are in the news around Cape May right, for it is in late May and early June that their life cycle sees them passing off our shores. Sooties breed in the Southern Hemisphere, on Sub-Antarctic islands off southern South America, New Zealand and Australia. After breeding during October to April, the Atlantic Ocean birds - mostly breeding around the Falklands and neighboring islands off Argentina and Chile - start to head north up the east coast of the Americas, with many spending the northern summer off Newfoundland, around the Grand Banks. As the season passes, many return southward directly to their breeding grounds, while others - perhaps none-breeders - continue eastward and spend August to October moving south via the coasts of Europe and Africa.

To us, this seems like an extraordinary lifestyle, essentially cruising from one end of the planet and back again under their own steam! But shearwaters are highly adapted to such a lifestyle and I had a rare opportunity to look into this today. Sam Galick called to tell me that he had found a dead Sooty Shearwater on the South Cape May beach, so I hurried along to try to retrieve the body before the heat and gulls had a chance to do their worst (on the walk out I passed a nice Lesser Black-backed Gull by the way!). Here's a few photos I took of the bird before it was put in the icebox to await delivery to the Academy of Natural Sciences in Philadelphia. 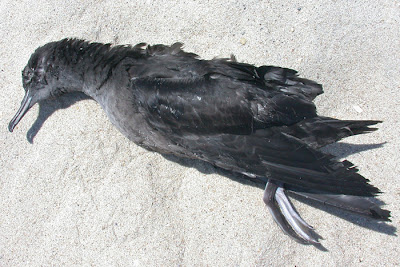 The upper side of a Sooty Shearwater is pretty much uniform, dark chocolate brown. 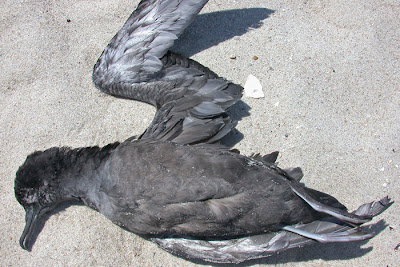 Below, sooties are a little paler, though still rather plain, brown without any of the white found on many shearwater species. 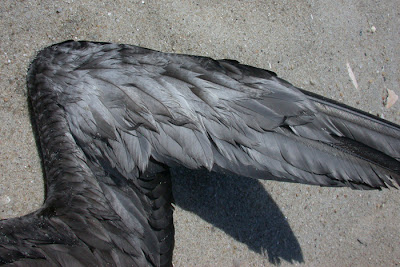 One feature that can be seen on a flying Sootie is the pale gray, sometimes silvery-looking, underwing, which can be seen here. 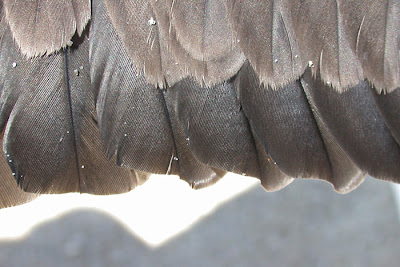 I consulted quite a number of books to try and establish something useful with regard to molt and ageing of our bird, but didn't come up with anything that the books seem to agree on. However, it did seem to me that all the bird's feathers were of the same age, there was no clear evidence of it having a contrast in the plumage that would indicate a mix of old and new feathers. Also, in the picture above, the tips of the secondary wing feathers seem to be broad and show no obvious sign of wear, suggesting they are pretty fresh. This would all seem to suggest that this is most likely a juvenile bird, born this past breeding season. 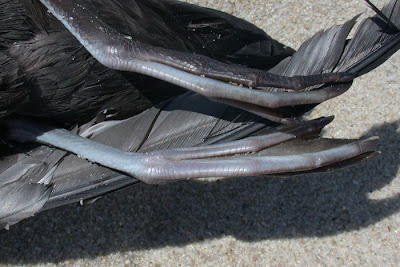 Shearwater legs and feet are interesting. The legs are laterally compressed, providing a shape that give a much stronger structure for shuffling along on. As with many seabirds, shearwaters shuffle along on the back of the lower leg (technically the equivalent of the sole of our foot, so fair enough!), rather than standing up on their toes like most birds. This is important to know if you go banding them, as you have to use specially designed, C-shaped bands. Note here that the Sootie's legs are a different color on the inside and outside! 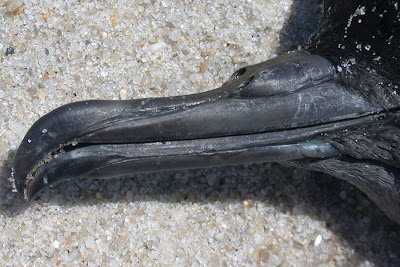 Shearwaters are in a group of birds collectively known as tubenoses. This group of seabirds, which also includes the albatrosses, has a special adaptation for getting rid of all that salt that dominates their marine world. salt-laden water is filtered out of the bird's body and exits via those two large nostrils (the eponymous 'tubenose') on the top of the bill. The water runs along the groove that you can see here and finally drips off the end of the bill - like a runny nose! Pretty clever stuff.

Keep an eye out these next few weeks for these ocean wanderers as they pass by far out over the waves, or look for Wilson's Storm-petrels which have a similar life cycle but may often be seen much closer to land in the mouth of the Delaware Bay, fluttering over the water like swallows or martins.