Don Freiday gave an excellent talk on Friday night at the Cape Maygration Spring Weekend, entitled 'How to identify birds like an expert'. In this talk Don covered - among many other things - the subject of how experts have the acquired knowledge to simply be able to recognize a bird; in other words, they can know what a bird is without having to actually go through a lengthy process of identification steps.

This was a very timely comment for me. On Thursday morning, while leading a Higbee Beach walk, I called people's attention to a flock of roosting shorebirds on the stone jetty at the mouth of the Cape May Canal. Hmm, I knew there had been a couple of Purple Sandpipers around recently, but this flock of 30 or so birds was probably more likely to be Sanderling, or perhaps Semipalmated Sandpipers, since such a high number of birds would surely not be Purple Sandpipers in May; after all, this is a wintering species here. The problem I had was that when I got a better look through the scope, I could have sworn that I could see pale legs. That's going to rule out so many of the peeps and left me in a quandry. I wasn't sure what these birds were - and yet I know Purple Sandpiper, I see them every year, up close and personal.

The birds were there again for the Friday walk. I was shaken! I had to point these out to people and call them Purple Sandpipers, and yet I didn't 'know' these birds, they weren't right somehow. I didn't recognize them. Time for closure, time to settle this once and for all! Tony Leukering and I walked down the jetty, right to the end, on Friday lunchtime, and we were amazed. Here they were, 30 Purple Sandpipers on May 18th - and all (of course!) in very unfamiliar breeding plumage. Gone were my usual cues - the flat gray upperparts contrasting rather weakly with the slightly paler underparts to give an overall rather plain bird. Instead, here were birds with dark, blackish, feather centers on the back and heavy blotching and streaking on the head and breast. A very unfamiliar bird, and a wonderful learning curve for me. Sibley's The Birds of Cape May lists a flock of 40 Purple Sandpipers on May 28th 1983, so this is no recordbreaker, but if you can get down to Higbee Beach and have a look at these birds, it really is quite a treat. 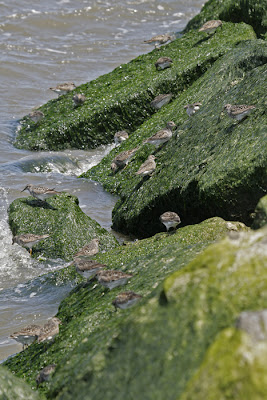 A surprising sight in May: 23 of the 30 or so Purple Sandpipers on the canal jetty this week [photo by Mike Crewe]. 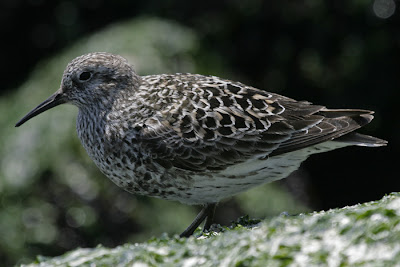 A most unfamiliar bird to most of us - a Purple Sandpiper in its May plumage. All the birds present had large black centers to the mantle and scapulars, but almost no warm, rufous tones. This seems to suggest that they were all first-summer birds (ie hatched in 2011) so perhaps they are loitering this year well south of the breeding range and will return to the Arctic to breed in 2013. This was a particularly dark bird with just a tiny amount of pale olive at the base of the bill and pretty dark legs [photo by Mike Crewe]. 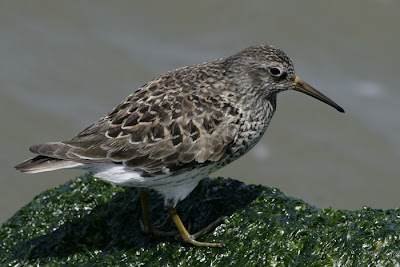 This individual has more olive on the legs and bill and at least some warmer margins to the upperparts [photo by Mike Crewe]. 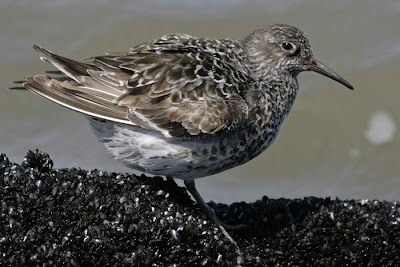 Another bird which looks somewhat intermediate between the two above [photo by Mike Crewe]. 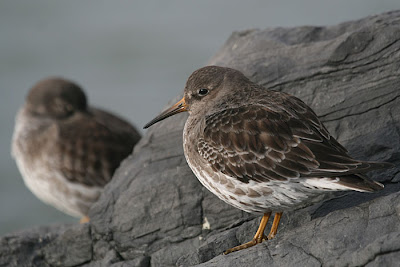 For reference, here's everyone's idea of a standard Purple Sandpiper - taken at Barnegat Light in December 2009 [photo by Mike Crewe].

The day you go out birding and don't learn something new, is a poor day indeed...