Dreary rain dampened proceedings around Cape May this past 24 hours, which is always a shame when so many people are out there trying to scout for their World Series of Birding teams - just two more days to go now!! The weather seems to have supressed bird movements through the area temporarily too, but the forecast for the weekend currently looks quietly promising, with dry weather and a light SW wind hinted at. Hmmm, sounds good for Higbee Beach!

Despite the rain, small parties of shorebirds and other waterbirds trickled through Cape May Point today, with our state park walk turning up a very smart breeding-plumaged Tricolored Heron and three Black Skimmers as well as some passing Willets, Short-billed Dowitchers, Dunlin and Least and Semipalmated Sandpipers. Some of the highlights that I have heard of over the past few days have included King Rails reported from Heislerville and Turkey Point (both Cumberland County), a White-winged Dove at Whilldin Avenue, Cape May Point on 5th, singing Lincoln's Sparrow at Higbee Beach on 7th, Clay-colored Sparrow at Swainton, the occasional Parasitic Jaeger in the rips on and off and a Brown Pelican off the point today. Heislerville continues to attract good shorebirds, though water levels are higher than intended there this year due to a faulty sluice gate system, which is being worked on I hear. Still, White-faced Ibis, Stilt and White-rumped Sandpipers, Ruddy Duck and a number of other species have been there of late so let's hope they hang on until the weekend!

One of the most remarkable events of the past few days has been the unprecedented numbers of Whimbrel reported from the Nummy's Island/Stone Harbor area. On May 5th, Sam Galick and Tom Reed counted a remarkable 1,144 Whimbrel flying in to roost in the area in the evening, which I believe sets a new reocrd count for New Jersey and must have been a fabulous sight. 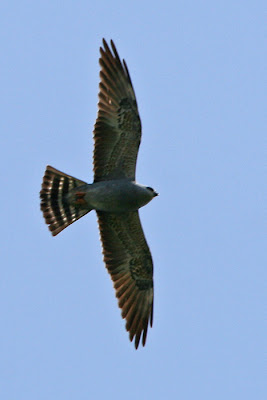 Driving along Fishing Creek Road on Tuesday and heading towards Villas, I noticed a bird of prey feeding gracefully over the tops of some tall Sweetgums right next to the old Pappa John's pizza store. A quick emergency stop and a grab for the camera were in order and I managed this passable shot of a Mississippi Kite before it worked its way off towards the east - you never know when you are going to need that camera handy! [Photo by Mike Crewe] 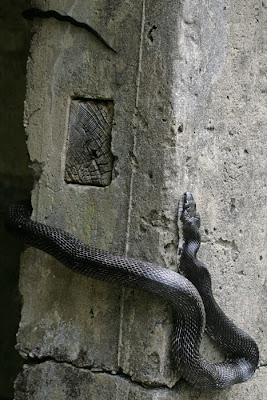 Snakes have been on my mind a lot lately - mostly because I have seen five different species in just the last seven days. This Rat Snake got me marvelling at the amazing climbing skills of an animal that has no limbs! Here it is just hanging out on an old wall - you can see its tail at top left - but just how do they do that?! [photo by Mike Crewe]. 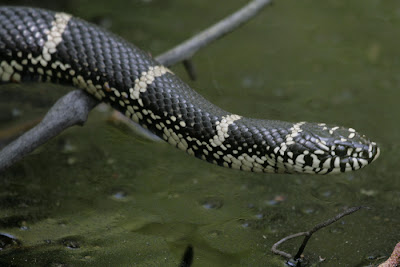 Seeing something new for your life list is always fun and Tony Leukering and I were especially pleased to find this King Snake which hung out with us for quite some time. It eventually crossed the track right next to Tony - who was able to put out a hand and tickle it as it glided quietly by. As with all of Cape May County's snakes, this species is harmless to man [photo by Mike Crewe].
Posted by Mike Crewe at 1:27 AM