Sneaking over the border

Anyone who knows me will know that I don't venture outside of Cape May County very often. Indeed, you may be very surprised to hear that I have only been to Heislerville (in Cumberland County) once since moving to Cape May three years ago - and I've never been in spring, when the place truly is at its best! So, with my fondly cherished record soon to be in tatters, it was with a heavy heart that I found myself heading down Matt's Landing Road today - though our arrival was held up briefly while I shifted a Mud Turtle off the road!

Heislerville really buzzes with activity in Spring; even as we were arriving, Great and Snowy Egrets were busy at their nests, two Glossy Ibises cruised over and single Black-crowned Night Herons could be seen ferrying back and forth overhead. Water levels on the main shorebird lagoon have been unfortunately unpredictable this year due - I'm told - to a problematic sluice, but even so, the assorted masses of shorebirds were still a delight to behold. Chief among them were great swathes of Dunlin and Semipalmated Sandpipers, all either resting or refueling before their onward connection to the Arctic tundra. Good numbers of other shorebirds were present too, including Short-billed Dowitchers, Greater and Lesser Yellowlegs, Ruddy Turnstone (actually just one or two of these as they prefer to be lower down the Delaware Bay), Willet and Black-bellied and Semipalmated Plovers. But our main interest was in the one that was a little different, a little out of place here - a Curlew Sandpiper, which by rights should be making its way up through Eastern Europe to the Russian Arctic about now! Heislerville has become one of the most reliable places in all of North America for this species in recent years and today we were in luck. As well as the Curlew Sandpiper, we also got lucky with a Clapper Rail which crossed the dirt road in front of our car, as well as a female Least Bittern which we saw well in flight. Give Heislerville a go around high tide any time over the next two weeks and you should find a whole lot of great birds to enjoy! Here's a short picture essay of today's visit. 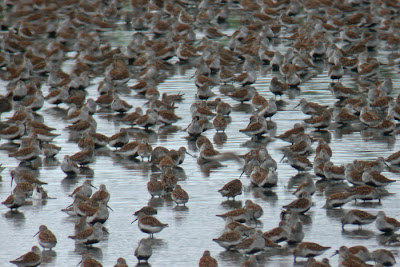 Heislerville is packed with birds right now and none are more snazzy than these Dunlins in full breeding colors [photo by Mike Crewe]. 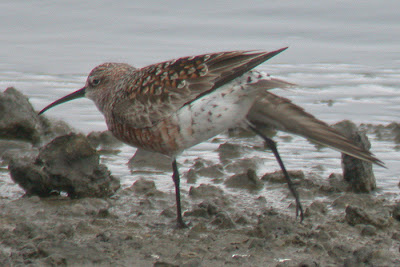 Our target - the Curlew Sandpiper we had been seeking. Note the curlew-like, decurved bill with very fine tip, the rich rufous and black tones on the back, brick-colored flanks and white undertail [photo by Mike Crewe]. 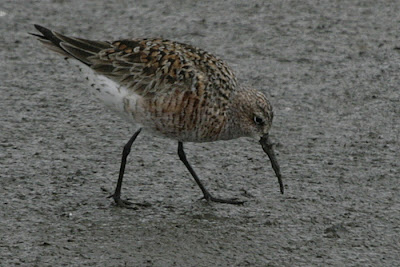 Curlew Sandpiper at Heislerville today; note all the points as listed above. This individual is most likely a female as the underpart coloration is pinkish rather than dark cinnamon and barely extends to the head, which is largely grayish in color [photo by Mike Crewe]. 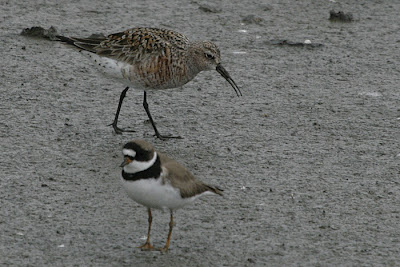 Just for size comparison, here's the same bird with a Semipalmated Plover [photo by Mike Crewe]. 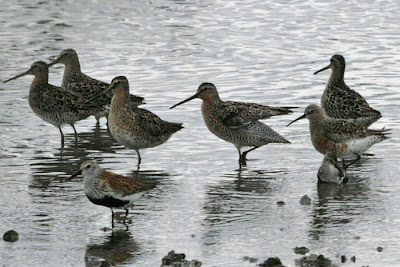 Here's the Curlew Sandpiper (far right) with a group of other shorebirds - a breeding-plumaged Dunlin (front left) Semipalmated Sandpiper (in front of Curlew Sandpiper) and five Short-billed Dowitchers. This offers many opportunities to compare and contrast the birds. Note that the Curlew Sandpiper is about the size of the Dunlin but with a finer-tipped bill, and clearly smaller than the dowitchers. The plumage of the sandpiper is pretty similar to the dowitchers, but note that the sandpiper has barely any supercilium above the eye, has a decurved (not straight) bill and is much whiter towards the back end below [photo by Mike Crewe]. 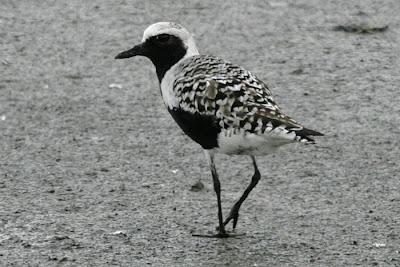 If you are shorebird watching over the next couple of weeks, be sure not to miss the Black-bellied Plovers, which look fabulous this time of year [photo by Mike Crewe]. 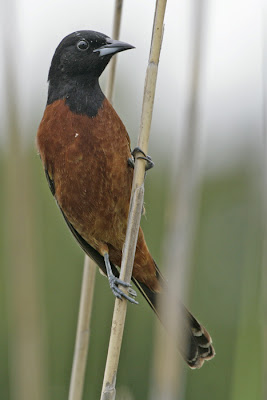 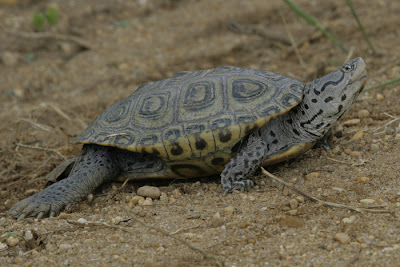 A quick word of warning. Be careful if you navigate your way onto the driveable dirt trails at Heislerville. Female Diamondback Terrapins are nesting right now and - like this one - like the relatively soft sand of the trail sides to dig into with their back legs. Please give them due care and attention, we like these little guys! [Photo by Mike Crewe]

Recent Sightings
With winds primarily in the East or North-easterly sectors this past few days, Cape May has been pretty quiet for migrants, though Tom Reed had a few warblers along the bayshore at Reed's Beach this morning. On May 20th, Sooty Shearwaters were in the news, with reports from a number of locations, including the beachfront at Avalon, where Tom Reed was able to notch up a tally of over 60 birds between spells of work (!). Wilson's Storm-petrels and a distant, unidentified jaeger were off Cape May Point on 21st, Vince Elia reported a Western Sandpiper among the Semipalmateds at Heislerville today (22nd) and Tom Reed had two Western Willets at Stone Harbor Point, also today. The Purple Sandpipers at the canal jetty nearest to Higbee Beach continue to attract attention and Tony Leukering reported 43 from there today. For anyone seeking Red Knots, it seems that numbers are at last growing with some high counts coming in now from both Nummy's Island and Cook's Beach. 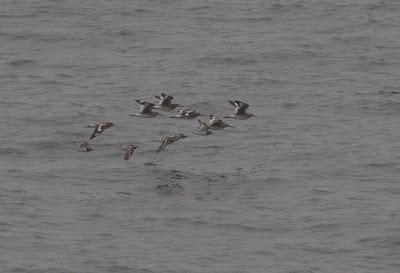 A good passage of northbound shorebirds took place up the lower Delaware Bay today and Tony Leukering took these nice shots of Semipalmated Sandpipers (upper) and Willets and Ruddy Turnstones (lower) passing the ferry. Wilson's Storm-petrels were also east to see from the ferry today.