Someone flicked the switch...

Someone flicked the switch last night and the difference was palpable. April 30th hovered somewhere around 57F with something of the threat of rain in the air. May 1st, after a bit of a rainy night, temperatures zoomed up another 20 degrees at the point and I wouldn't mind betting that the north of the county touched 80F. Birds have been finding their way to Cape May in dribs and drabs so far, but that's pretty typical for April. There's been no major arrival of night migrants as yet, though day-flying migrants such as swallows and martins have certainly been arriving in good numbers. One of the things you can afford to do when you live in Cape May is experiment with your time, rather than needing to maximize birding time by sticking to the tried and tested locations. Having been out of the country for a week, I was keen to see what had been arriving in my absence so yesterday I was out at a little wetland on the 'unfashionable' east side of the peninsula and was surprised to find a nice selection of birds. At least 80 Barn Swallows, plus smaller numbers of other hirundines, were hawking insects over a grassy meadow and two Eastern Kingbirds argued with each other over a favored perch. Seven dapper Blue-winged Teals floated serenely on a nearby pond, a Green Heron flushed from the reedy margins and both Indigo Bunting and Orchard Oriole were in song - both firsts-of-the-year for me. Better still, warblers were mooching through the field edge and in a nearby piece of wet woodland. I could hear the soft 'sigh' of a Blue-winged Warbler, a startling male Prairie Warbler in full razzamataz showed up and a brief glimpse of a white eyering eventually fully evolved into a Nashville Warbler. Ahhh, spring migrants are here - and here now!

Jumping forward to today, the fully 180 degree turn-around in the weather was provided by a very welcome warm front from the south. Such fronts seem always to be accompanied by rain at this time of year, but the clouds slowly rolled away and with the improving weather came a fantastic migration of butterflies. I was slaving over a hot laptop when Tom Reed's initial text message came through, alerting us to a noteworthy northward movement of Red Admiral butterflies, but it wasn't until I took a well-earned cup of Earl Grey (old habits die hard don't you know!) later in the afternoon that I became aware of a steady stream of butterflies pressing northward wherever I loooked! Only one place to be right now I thought, so I took my trusty camera down to the wonderful Beach Plum bushes at Higbee Beach - and they were awesome! The early spring meant that many bushes were past their best but there was still plenty of flowers to keep these hungry travellers happy. Here's a few photos of the diners: 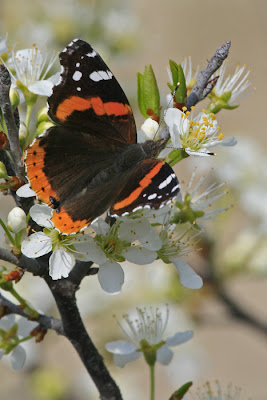 I am sure we will never know how many Red Admirals poured through Cape May today, but reports came from across the whole county and they provided a truly amazing sight as they plodded steadily northward. In some areas, flocks were streaming westward, perhaps individuals that had wandered out to sea during the Delaware Bay crossing. Red Admirals are easily recognized by their bright red wing bands, though these can be dully orangey in worn individuals [photo by Mike Crewe]. 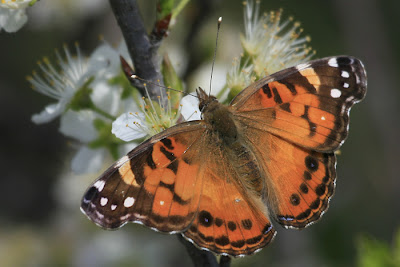 A pretty good number of American Ladies accompanied the Red Admirals (a ratio of about 1:20 where I was viewing from). As with the admirals, the vast majority were large-sized, brightly-colored and seemingly pretty recently emerged individuals - this year's first batch with the 'wanderlust' gene switched on [photo by Mike Crewe]. 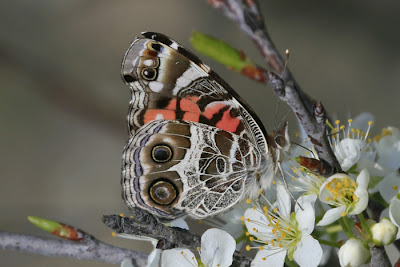 Each year we get a variable number of Painted Ladies accompanying the American Ladies, so here's a quick ID guide to telling them apart - you can do it on the upperside or the underside, but the underside works best. This is an American Lady - note the two large eyespots on the underside of the hindwing [photo by Mike Crewe]. 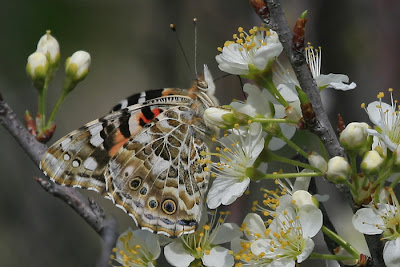 This is the only Painted Lady that I managed to find this afternoon on the Beach Plums - maybe more will come later, but the last two years have been pretty poor for this species here. Note that Painted Ladies have four small eyespots on the underside of the hindwing [photo by Mike Crewe]. 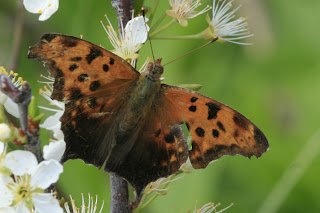 Not surprisingly perhaps, a few other species seemed to be caught up in the butterfly frenzy, the next commonest species being Questionmark. You may well have seen some of these already this year, but most likely you will have seen the form that hibernates with us as an adult (you will know it because the hindwing is the same color as the forewing). Individuals that emerged from a chrysalis in the current year have dark hindwings, like the one in the photo here; these will have emerged somewhere down in the Southern States - perhaps South Carolina or Georgia - and will be surging through to repopulate the North. My large Siberian Elm tends to weep sap at this time of year and at least 35 Questionmarks were lapping up this rich food source this evening - quite a sight! [Photo by Mike Crewe.] 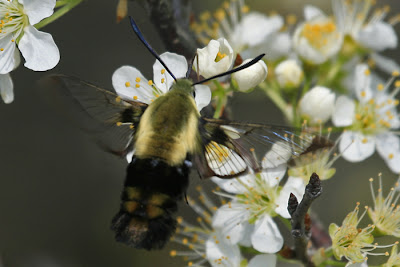 Careful checking around the flowers might reveal something else lurking amongst the commoner species; this Snowberry Clearwing is a day-flying species that is related to the sphinx moths and clearly escapes predators by pretending to be a bumble-bee [photo by Mike Crewe].


Sunday I was up at Belleplain for the latest in our new series of wildlife walks. As ever, the wildlife did not let us down with Great Crested Flycatchers, Ovenbirds and Blue-gray Gnatcatchers clearly here in good numbers now and many other treats in store: 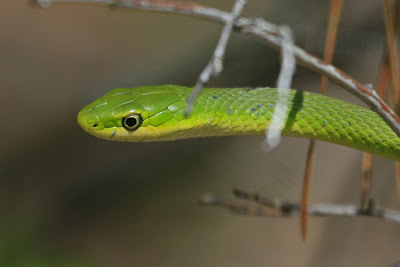 For most of the group, a chance encounter with a very docile and approachable Rough Green Snake was a real walk highlight as it crept stealthily through the bushes [photo by Mike Crewe]. 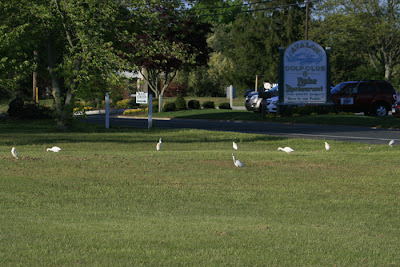 Heading back from Belleplain via Cape May Court House, Tony Leukering and I discovered that eight Cattle Egrets were gracing the lawns of the Eastern Shore Care Home, near Avalon Golf Course. This site has a remarkable ability for attracting this species each spring [photo by Mike Crewe]. 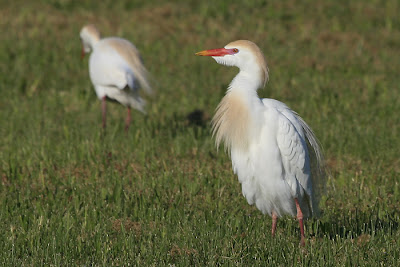 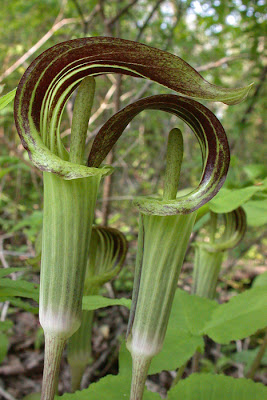 Now that May is here, you can look forward to the native flowers starting to take charge over the alien interlopers. I found these two 'kiss-and-tellers' at Cold Spring this evening. This plant is called Jack-in-the-pulpit (you can see Jack in the middle there) and the flower is followed by a cluster of brilliant red berries [photo by Mike Crewe]. 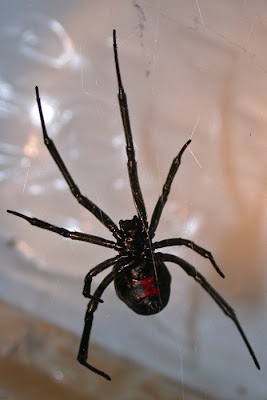 Last - but probably not least... My dear wife will be pleased to hear that I finally caught the Black Widow in our basement!!! [Photo by Mike Crewe.]

Recent Reports
The greater number of our summer migrants are with us, at least in small numbers now; Rose-breasted Grosbeaks are at the Northwood Center feeders, Ruby-throated Hummingbirds are whizzing through and Blue Grosbeak, Indigo Bunting, Summer Tanager and assorted warblers all await you. Yellow-throated Vireos are typically scarce in the county, but have been reported from Peaslee WMA as have Red-eyed Vireo, Acadian Flycatcher and American Redstart. Tom Reed found two Least Terns at Stone Harbor Point on April 27th, while scarcer bird finds of late have included an American Golden Plover at Shephard Davis Road, Cumberland County on April 28th, a White Ibis at Brigantine on April 30th and an intriguing report of a Northern Wheatear at the state park on 27th but I have heard no further word on that bird.
Posted by Mike Crewe at 8:59 PM