A Swallow Spectacular at Cape May Point 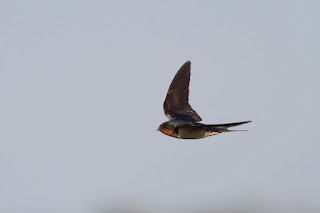 [One of very many Barn Swallows over
Cape May Point last evening. Photo by Tom Reed.]

Yesterday's very strong northwest winds ushered in a few hundred swallows (and one Swallow-tailed Kite) to Cape May- and while I didn't hear of any Kite reports today, there were still a large number of swallows to be found along the beaches, marshes and ponds between the 2nd Avenue jetty and Bunker Pond. 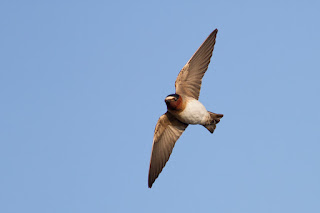 [Well over 30 Cliff Swallows could be found between Bunker Pond and the South Cape May Meadows last night-- a notable spring count. Days with northwest winds always tend to produce at least a few of these in April. Photo by Tom Reed.] 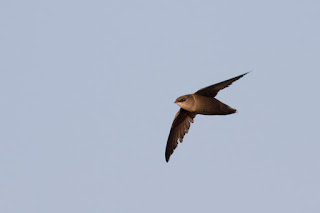 [Chimney Swift at eye-level over the east path of
the Meadows last evening. Photo by Tom Reed.]
Sam Galick and I spent a bit of time perusing the swallows late in the morning, and came up with the following very broad estimates: 525 Barn Swallows, 250 Tree Swallows, 125 Purple Martins (many of these likely belonging to the State Park colony), 40 Bank Swallows, 30 Northern Rough-winged Swallows, and 20 Cliff Swallows. Over 100 Chimney Swifts were also evident. It should be noted that there were actually quite a few more Bank and Cliff Swallows last evening, and it appears that some of these escaped on today's more subdued breeze out of the east. 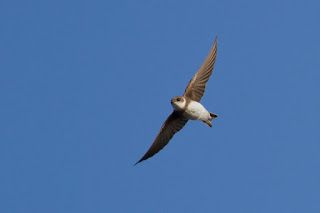 [A Bank Swallow over Bunker Pond. Photo by Tom Reed.]
Posted by Tom Reed at 6:44 PM