Light south-westerlies gave perfect conditions for migration last night and, though we are still a way off any numbers of migrants, certainly a few slipped through under cover of darkness. A scattering of reports of singing warblers came in from Cape May Point right up to Belleplain and by lunchtime, Karen Johnson reported a 10-warbler species day! Sightings included Worm-eating, Black-and-white, Prairie, Pine, Palm, Yellow-throated and Yellow-rumped (of course!) Warblers, Northern Parula, Louisiana Waterthrush and Common Yellowthroat. Blue-gray Gnatcatchers could be heard in many places around Cape Island and both Eastern Kingbird and Blue-headed Vireo were reported from the state park.

The South Cape May Meadows with its well-managed habitats continues to attract a nice range of ducks, including both Blue-winged and Green-winged Teal and at least 15 Wilson's Snipe were noted there on Friday. Four pairs of Piping Plovers are back on territory on the south beach and the annual Northern Gannet show continues offshore. Small numbers of Willets and Short-billed Dowitchers are filtering along the coast - it will soon be time to be at Heislerville!

Butterflies continue to be in the news, with Will Kerling reporting a Common Sootywing at the Rea Farm and at least two Monarchs reported today. For a really thorough account of the remarkable events of this spring so far, I strongly recommend visiting the South Jersey Butterfly Log, which gives an excellent overview of happenings in the world of butterflies - you might even considering becoming part of this great project, which is giving us a hitherto unknown insight into South Jersey's butterfly fauna. 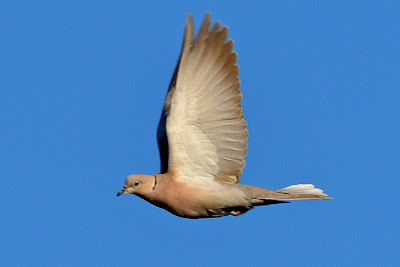 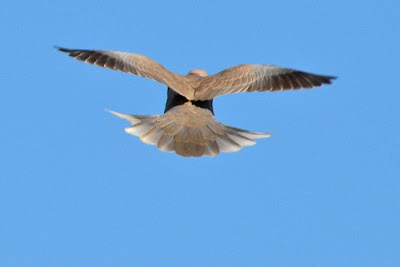 Cape May Point's Eurasian Collared Doves continue to draw a regular trickle of admirers, though it's hard to be sure what is going on down there at the moment. To our knowledge, at least two nests have been built, but neither seems to be occupied. I took a walk along Whilldin Avenue today and found all three birds at their favorite corner, on the intersection with Lincoln Avenue. From the behavior of the two birds with puffed out necks that were calling intensely, I could deduce that they were males while the third bird, being heavily pestered by one of the males, was presumably a female. This vanguard of birds moving up the East Coast most likely consists of young birds seaking new territories and it is possible that, in their first year, they may need a little practice before they finally get down to raising a family! [Photos by Joe Siekierski]
Posted by Mike Crewe at 3:49 PM