We all know that nature can be tough at times. It's dog eat dog out there, eat or be eaten. Certainly this has been the order of the day today, as my day started with the EZ Birding walk at Cape May Point State Park and one of the surprise events came right near the start. Our local Purple Martins are only just arriving back on the breeding grounds and keeper of the martin boxes, Dave Thomas, had only just left the state park when I turned in response to panicked calls from the Purple Martins - a male Merlin was gliding to the ground and sat slap bang in the center of a near-empty parking lot, with a Purple Martin in its talons! Sadly thats one that won't be passing its genes on this year, but a Merlin has to eat. My day ended with a selection of great photos from Sam Galick, among them several that followed a similar theme so I've posted them below.

Spring migrants continue to trickle in, with small parties of both Great and Snowy Egrets crossing the bay this morning and at least one Pine and three Palm Warblers at the state park. Osprey and Laughing Gull numbers continue to grow with at least six of the former hovering over the state park ponds this morning. Tony Leukering reported hearing a Broad-winged Hawk at Belleplain today and a Louisiana Waterthrush was reported from there on March 31st. 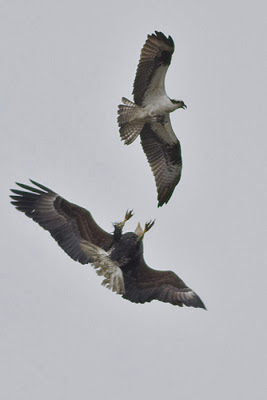 For once, an Osprey gets the better of a Bald Eagle! Aerial combast between these two is commonplace in the skies over Cape May County, with a fish lunch the prize for the winner! [Photo by Sam Galick
] 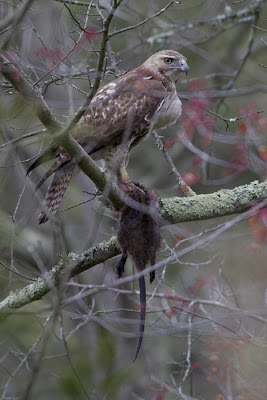 Eyes bigger than his stomach? Birds have a kind of holding center for food called a crop. Its like a sort of bag that allows them to eat large amounts of food in one go, which can then gradually make its way into the stomach proper in smaller, more manageable amounts. A raptor that has eaten well recently is often recognizable as such by the bulge in its upper chest (food sitting in the crop) but this Red-tailed Hawk literally does seem to have bitten off more than it can chew - and it still has the best part of the Muskrat to go yet! [Photo by Sam Galick] 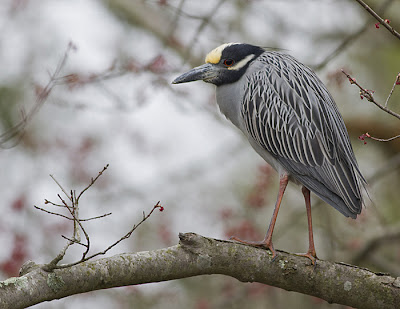 Recent incoming migrants include Yellow-crowned Night Herons and Sam Galick photographed this one at a breeding location in Avalon on March 31st. Actually, Tom Wilson emailed me a while ago to say that five had already returned to a breeding site in Brigantine on March 23rd.

The weather looks set fair for the next four days or so, so it should be a good time to get out and look for emerging insects. Today, Tony Leukering reported to me Eastern Tailed Blue, Falcate Orange-tip and Eastern Pine Elfin all on the wing, while I noted a couple of American Ladies in the state park. On the dragonfly front, there is finally more than just the odd migrant Green Darner out there now, with Twin-spotted Spiketail, Uhler's Sundragon and Orange Bluet all out today. Maybe not so good for migrant birds though, with winds mostly predicted to be from the NW, shifting to NE by Friday.
Posted by Mike Crewe at 6:02 PM