I was back up in Belleplain State Forest today for our first 'Belleplain Wildlife' walk, which turned into a really nice day. Though we had seen some light rain overnight, the clouds slowly eased away and, by the start of our walk at a comfortable 10:30AM, the sun was pushing through and temperatures were climbing. It was amazing just how much we were able to fit into a 2-hour walk (well, OK, 2.5!!) and all the Bs - birds, beasts & botany all put on a good show. Yellow-throated, Black-and-white, Pine and Worm-eating Warblers and Ovenbirds were all in song and we watched a female Pine Warbler gathering duck feathers to line a nest way, way up in a stand of white-cedars. We studied Slender Parsley-piert, an introduced, European plant which is not yet 'officially' on the New Jersey state list, then we checked out a tall Sweetgum which was loaded with balls of American Mistletoe. The dirt roads provided us with some nice insects, including Harlequin Darners and both Brown and Eastern Pine Elfins, as well as good close-ups of both Blueberry and Holly Azures. After then marvelling at the amazing green iridescence of a Six-spotted Tiger Beetle, we watched a female Twin-spotted Spiketail egg-laying in a nearby stream. All great fun - don't miss out next time! Here's some photos from today's outings: 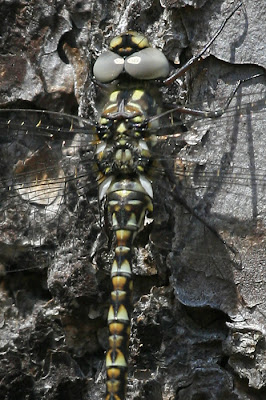 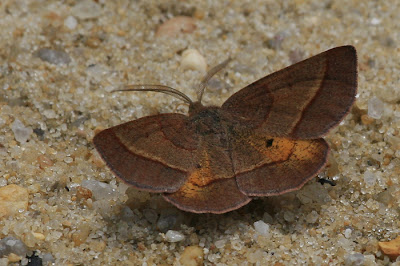 A Yellow-washed Metarranthis (Metarranthis obfirmaria). This day-flying moth was fairly common on our walk today and often caused confusion as we looked for elfin butterflies [photo by Mike Crewe] 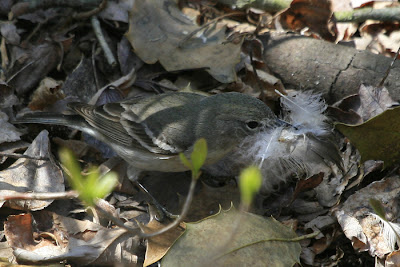 What better sign of spring than a bird feathering her nest?! This female Pine Warbler had found a ready supply of duck feathers and returned repeatedly to the same spot to get a cosy lining for her nest [photo by Mike Crewe]. 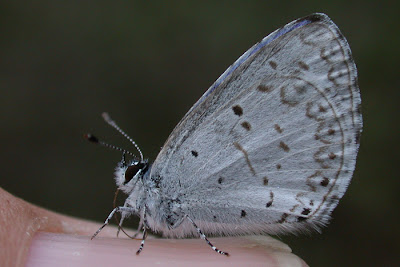 Once recognized as a single species, the Spring Azure, this group of butterflies has now become a nightmare scenario! This (probably) is (I think) a Blueberry Azure - or maybe it's something else!! Actually, the very small size (that's my thumb nail it's sitting on!) and the slightly violet tinge to the blue uppersides of the wings (visible in flight) certainly suggest that species, though our resident butterfly guru, Will Kerling informs me that it's a Holly Azure - back to the drawing board I guess!! [photo by Mike Crewe]. 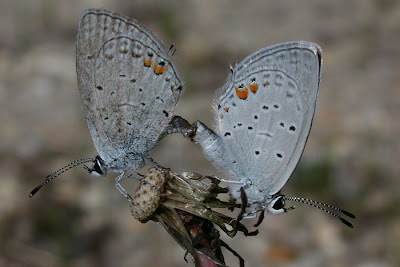 As a direct comparison with the above butterfly, here's a pair of Eastern Tailed Blues - note the orangey spots which separate this species from the azures, as well as the tiny tails on the back edge of the hindwings [photo by Mike Crewe]. 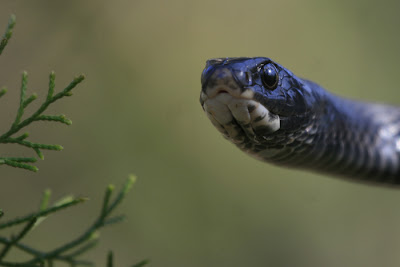 A great way to round off the day! It's not often that you get a chance to look up at a snake, but Tony Leukering and I did just that when this Black Racer decided to escape from us by climbing a tree! We saw two Black Racers and a Northern Water Snake after this morning's walk - a sure sign that things are warming up [photo by Mike Crewe].

Recent Reports
Seven Stilt Sandpipers were on Bunker Pond in the state park for a short while this morning before heading off northward, otherwise much of the news has involved warblers again today. Bob Fogg reported a singing Nashville Warbler at Del Haven, Prothonotary Warblers were reported from Beaver Dam, Belleplain and Mauricetown and Ovenbird and Northern Parula were noted at Peaslee WMA. Dave Lord rounded off his day with a Green Heron at Goshen Landing in the evening. Things should continue to arrive over the next few days, though clear weather may see many birds moving quickly through rather than hanging around.
Posted by Mike Crewe at 10:35 PM