Spring continued to proceed nicely in Cape May this week. An early leaf-out was accompanied by a few nights of southerly winds, which helped usher in a number of new migrants. I heard from a few folks who visited Belleplain Saturday morning, and their reports included an early Summer Tanager along with Red-eyed Vireo, Blue-winged Warbler and Hooded Warbler. 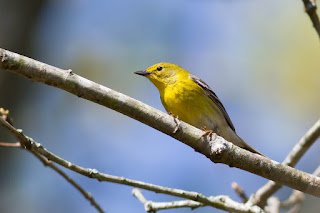 [A Pine Warbler in Belleplain this weekend-- one of 14 species of warblers
found there during the past few days. Photo by Tom Reed.]

Seawatching from Cape May Point continues to produce fair numbers of Northern Gannets, and the occasional Parasitic Jaeger or Common Tern is also now a possibility. A widespread flight of Double-crested Cormorants could be viewed throughout the peninsula on Saturday. 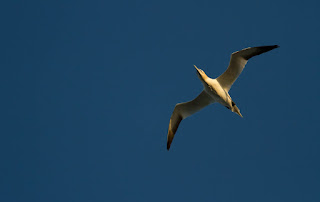 [While Gannets are easy to see this time of year, most aren't as close as
this one, which passed over the dune crossing at St. Pete's during a
windy morning earlier this week. Photo by Tom Reed.]

Shorebird numbers are also on the rise. The first reports of Semipalmated Sandpipers have started tricking in, while Western Sandpipers have been fairly reliable in the Nummy/Stone Harbor area, with a high count of 34 on Wednesday (a good total for April). Dowitcher, Dunlin and Black-bellied Plover numbers are all increasing, and Whimbrel are beginning to infiltrate Atlantic Coast marshes. I counted over 40 migrating north past the South Cape May Meadows on Friday morning, and nearly 60 were in the marshes behind North Wildwood today.

It's also worth visiting a nearby salt marsh during a calm evening in the near future. Clapper Rails, Willets, Marsh Wrens and Seaside Sparrows are all very vocal right now at locations such as Cook's Beach, Jake's Landing and Stipson's Island. Enjoy these marsh-dwellers before biting insect season really starts. 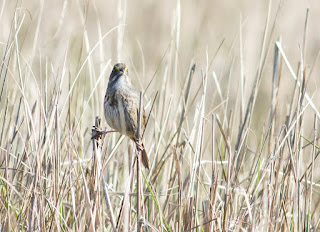 [Now is a great time to see and hear Seaside Sparrows, such as this one at Cook's Beach yesterday. You may notice that it's banded! Photo by Tom Reed.]
Posted by Tom Reed at 3:18 PM