There's more competition among Cape May birders now, as Tom Reed joins the ranks of big-lens-toters and has just sent me some of his first shots. Looks like I'm going to have to get out more! 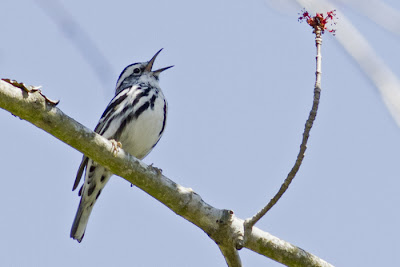 Early-arriving warbler species such as Pine and Yellow-throated Warblers have been well-recorded already this spring, but we're currently having something of a pause now as we wait for the main spring wave to advance northward. This Black-and-white Warbler has already made it to C ape May though and was singing in Middle Township at the weekend [photo by Tom Reed]. 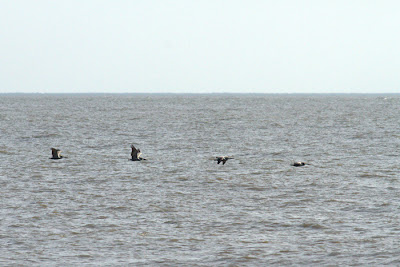 Single Brown Pelicans are being noted on and off now, but four this early in the season is certainly unusual. These were heading west off the South Cape May Meadows [photo by Tom Reed]. 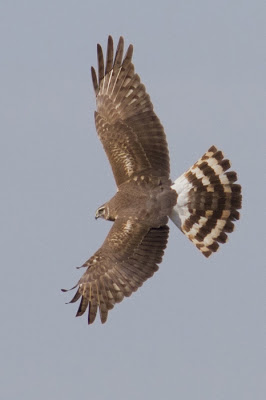 Close encounters with Northern Harriers are always exciting, but perhaps never more so than when you have a new camera in your hand!! This bird was at the state park Sunday morning  [photo by Tom Reed]. 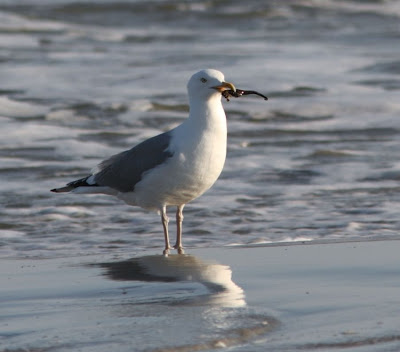 Sometimes a second look is required to see the less common... an ordinary, everyday American Herring Gull - but it's holding a seahorse in its beak! This bird was photographed at Stone Harbor beach recently [photo by Beth Polvino]. 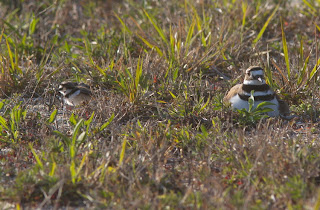 Borne in 2012! The breeding season is well under way for some, including this Killdeer with a hatched chick on a school field in Cold Spring yesterday [photo by Tony Leukering].

Other news
Up to three Cattle Egrets have been reported intermitently over the past few days from the Eastern Shore Nursing & Rehab Center which is on Route 9 opposite the Avalon Golf Club, a few miles north of Cape May Court House. On April 8th, a Black-legged Kittiwake passed south off Sunset Beach with a group of Bonaparte's Gulls, while Don Freiday and Beth Ciuzio struck gold with a Swallow-tailed Kite which flew right over them on the parkway somewhere around the 3-mile mark. On April 9th, three White-faced Ibises were reported from Brigantine, no doubt associated with the now noticeable northward movement of herons, egrets and cormorants through Cape May. Other interesting birds included a fully breeding-plumaged Red-throated Loon at the concrete ship on 10th and a singing White-crowned Sparrow at the corner of Bayshore and New England Roads, also on 10th. Piping Plovers continue to increase in number, with eight on the beach near the Hereford Inlet Lighthouse recently - and two River Otters also there!
Posted by Mike Crewe at 1:52 PM