Despite a dreary, overcast day at Cape May today, there has been plenty of activity in both birds ands birders this past 24 hours! Perhaps most obvious has been the impressive Northern Gannet show off the point; I met up with Tom Reed at St Pete's this morning before work and when I got there he was just passing the 2,000 mark for his count of gannets passing out of the bay. Also obvious were parties of Ruddy Turnstone and Purple Sandpipers moving between the jetties, groups of Dunlin heading north offshore and busy parties of Black Scoter singing their wonderful, mournful tunes. Tom's hilight of the morning was an early Brown Pelican that passed by a little after 7:00AM.

Blue-gray Gnatcatchers have started to arrive now, the first being reported on March 28th, with others following daily since then. On 28th, Tony Leukering  noted a Short-eared Owl at Stipson Island Road and a Cattle Egret was reported by Chris Vogel at the South Cape May Meadows; an American Bittern was also at the meadows the same day and one had been seen at the state park on 27th. Swallows continue to dribble in, with a Bank Swallow noted on 29th, and two Northern Rough-winged Swallows and 15 Purple Martins at the state park on 31st. An American Kestrel has been hanging out on New England Road/Bayshore Road for a few days now and the female Dickcissel continues to appear intermittently at the Northwood Center feeders. A Palm Warbler was one of the highlights of the first Higbee Beach Friday walk of the season on 30th, along with a small northward movement of Great and Snowy Egrets and three Blue-gray Gnatcatchers.

Migration often produces occasions where birds are found 'out of context',  and my latest experience of such an event was certainly a surprise. Out on the barrier islands last weekend, looking at plants around the edge of a soccer pitch in Sea Isle City, I was not surprised to note 10 Brant feeding out on the center circle in the middle of the field - but I was very surprised to notice a female Wood Duck hanging out with them! At this time of year, you have to keep an open mind!!

Butterfly Update
Regular readers will be aware that we are having an extraordinary year for butterflies in South Jersey this year and we will be forever grateful to Jack Connor and the South Jersey Butterfliers who are doing a great job of keeping an accurate and up-to-date record of events. Today, Will Kerling updated me on the findings for March 2012 and they really are truly remarkable. In March 2011, the group logged 100 records of eight species of butterfly; in March 2012 - with one day still left to be completed - the group has logged 619 records of 32 species of butterfly in New Jersey, from Burlington County south. This is even more staggering when one considers that 19 of these butterfly species have never been recorded  in New Jersey in March before... 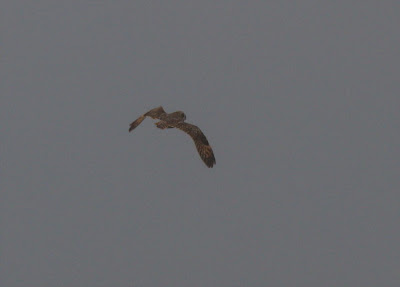