Things that go beeep in the night - and cross the road!

With temperartures edging upwards there's a sense of spring in the air and that classic combination of sunny spells interspersed with rainy spells has got the flower buds popping open and all sorts of animal activity going on. This time of year is particularly a time to be careful if driving after dark - for things are a-foot out there! This was brought home to me when I heard about last weekend's Woodcock Dance which sounded like they had an amazing time. Short-eared Owls and Northern Harriers parading right before the group, a singing Seaside Sparrow, then some wonderfully obliging woodcocks that displayed from right in the middle of the track. All fantastic stuff and hopefully all to be repeated this coming weekend. We still have just a few places left on this coming Saturday's Woodcock Dance program so don't miss out if you want a close encounter with the 'Timberdoodle' - call Chris Tonkinson on 609-861-0700 to find out how to take part.

I mentioned driving after dark above and the main reason I did this is because we are rapidly heading into amphibian time. Over the next few weeks, our amphibian species will be emerging from winter hiding places and making their way to traditional breeding pools, some of which have been used for many generations. Amphibians most often move in greatest number on wet nights and their routes often take them across roads. So do please be alert to little guys weaving across the lanes and try to avoid them as best you can. Many of our amphibians are in steep decline due to habitat loss and the devastating effect on their populations of feral and domestic cats, so anything we can do to help will surely be appreciated by them. 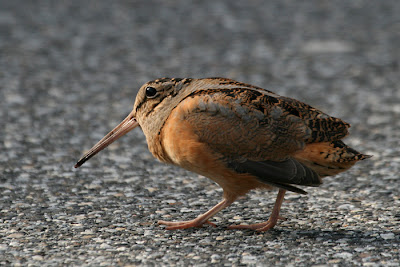 Why did the Timberdoodle cross the road? To get to this weekend's Woodcock Dance of course! This guy actually crossed the road in front of me at 3pm and gave me a nice opportunity for a broad daylight photo session from the comfort of the driving seat! [Photo by Mike Crewe] 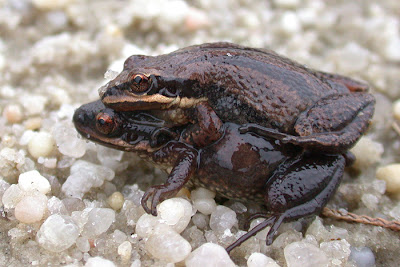 New Jersey Chorus Frogs are kicking up a right racket at a pond near you right now! This species seems to be particularly common from Rio Grande north to Goshen and Swainton. [Photo by Mike Crewe] 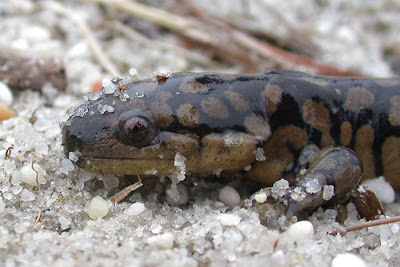 A prize find at any time! Tiger Salamanders are rare in Cape May but still present at suitable locations. This is a State Endangered species and should not be molested without authorization. Salamanders are early birds and large species are already well into their breeding season. The location where I found this adult also had a large number of salamander tadpoles present. [Photo by Mike Crewe] 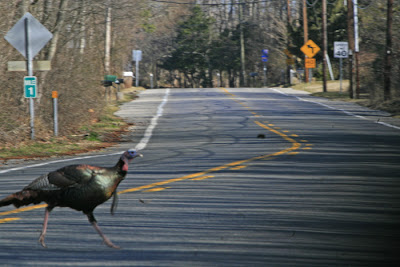 And talking of crossing the road - watch out for big guys as well as little guys while you are out and about in Cape May! Wild Turkeys are getting into courtship mode now and traffic sense will no doubt go out of the window for a few weeks! [Photo by Mike Crewe]
Posted by Mike Crewe at 10:36 AM