Countdown to the Pelagic - and other news

My regular Wednesday morning walks at Cape May Point started today - and how great it felt to be back out in the field and looking at Cape May's birds! While we were out there, much of our walk took place against a wonderful background sound of Black Scoter calling away out in the bay with their almost ethereal wailings. And that reminded me - our 'Poor Man's Pelagic' takes place this coming Saturday and I'll bet that this very same sound will be a background to that trip too. In past years, this program has given people a great opportunity to get some exciting close looks at a good range of seaducks, loons and - of course - Northern Gannets. Indeed, right on cue, there has been some pretty good gannet movements already in the Delaware Bay and this is a great opportunity to pass right in amongst them. So what is the Poor Man's Pelagic? Well, it's a great opportunity to get out on a boat and look for seabirds without having to head way offshore, or be out overnight, or have an ever-so-early start. We cross the Delaware Bay on the Cape May-Lewes ferry and we take a good look at whatever is out there, often getting very close to birds that would otherwise even be beyond scope distance! Interested? Check out the details on our events calendar and give Chris Tonkinson a call! It's a great way to be far from the madding crowd and out enjoying birds!

Our walk this morning revealed that the Glossy Ibis and two male Blue-winged Teal continue in the state park and we flushed four Wilson's Snipe as we made our way round the trails, so they are heading north now. Also heading north are Pine Warblers - in good numbers now. Indeed, after four days out of the office, I reckon by far the commonest topic of discussion in the emails waiting for me was Pine Warblers! They are clearly moving well now and many pictures were sent to me of birds at backyard feeders. For a species that habitually arrives here from the south in mid-March, they need to find food wherever they can find it, since insects will still be in short supply. So you will often see Pine Warblers rummaging around on the ground for last year's fallen pine seeds, or taking seeds and suet from your backyard feeder!

Also of interest over the past few days, Sam Galick reported a fly-over American Golden Plover at Cape May Point on March 18th. This is an exceptionally early date for Cape May and a species which remains a rare migrant in spring. Other shorebirds in the news include American Oystercatchers and Piping Plovers which now seem to be well and truly 'in' at South Cape May Beach (three pairs of the latter were present on 19th) and two Stilt Sandpipers which Harvey Tomlinson saw at Heislerville on 20th. A Wilson's Snipe was at Beaver Dam on 17th and Peter Bosak reported an immature male Common Goldeneye with Ring-necked Ducks on Hand Millpond off Rt 347.

More 'first-of-years' include a Louisiana Waterthrush heard calling by Brian Johnson at the Mauricetown Causeway on 20th and a Blue-gray Gnatcatcher seen by Tom Reed in Cape May City today (21st). 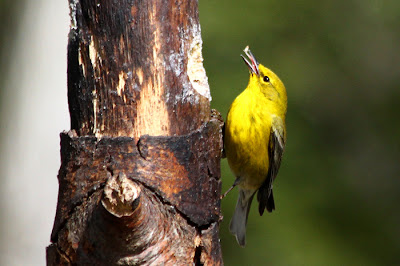 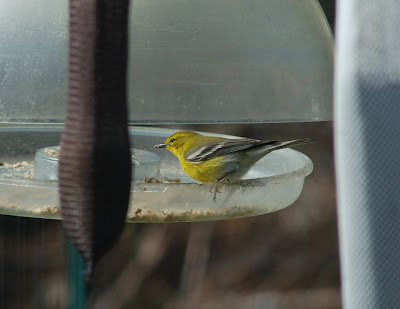 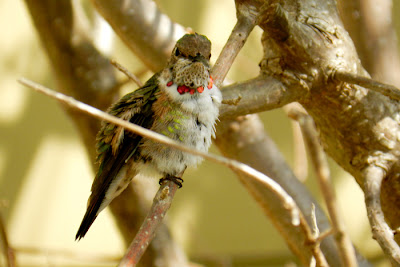 News of the Broad-tailed Hummingbird comes less frequently now with fewer visitors per day, but this photo taken by Hilary Sullivan shows that it was present to 18th at least and its molt is gradually advancing, with more scintillant throat feathers now present. 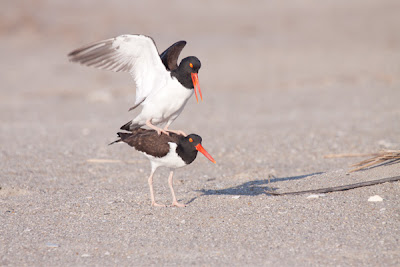 Wasting no time! American Oystercatchers at South Cape May Berach are keen to get going... [photo by Chris Borkowski] 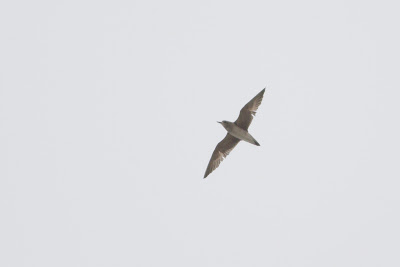 An American Golden Plover over Cape May Point was a great find on 18th [photo by Sam Galick].
Posted by Mike Crewe at 3:34 PM