If you go down to the woods today, you're sure to get a big surprise! Drive down Seagrove Avenue or Bayshore Road and you will suddenly find great vistas have opened up to you; views that you never knew were possible. Why is this? Well, it's all part of a drive to rid Cape Island of some of its most persistent alien invasive plants. Admittedly it looks pretty drastic at the moment, but the end result should be more natural habitat for wildlife in an area that really needs it. For more information on this work (and pictures!) go to our Conservation page by clicking here.

Perhaps inevitably, I have been bombarded this past 24 hours by emails from people reporting earlier dates for just about everything I mentioned in my last post! This is perhaps inevitable in the new age of birding, where observers' sightings get scattered to seemingly ever more listserves, websites, blogs, texting services and databases, rather than coming through a single, local collection point. I hear that Pete Bacinski and Sandra Escala chanced across Deidre Asbjorn watching a Laughing Gull at Cook's Beach on March 3rd, so it looks like Deirdre gets the coveted LAGU Award!

Tree Swallows seem to be trickling in gradually throughout the area with small numbers reported from several locations over the past few days. Great Egrets, Great Blue Herons and even the odd Snowy Egret have all put in a showing too; Jim Blumenstein mentioned a gathering of 25 egrets at Heislerville, while at least six Great Egrets and four Great Blue Herons were on Magnolia Lake in Seaville when I drove past there on Monday. Surely the first real sign of spring came with the first eye-witness report from the field of warblers arriving at the point. Tom Reed reported 21 Pine Warblers heading north at St Pete's in an hour on the morning of 14th. Yesterday also produced the first Holly Azure of the year for Will Kerling, an increase in the number of Orange Sulphurs, Small Whites and Mourning Cloaks and my personal first Green Darner of the year - though Jim Dowdell and Will Kerling have both had this dragonfly species this week too.

Temperatures are now hitting the Seventies - it will soon be time to take a layer of clothing off! 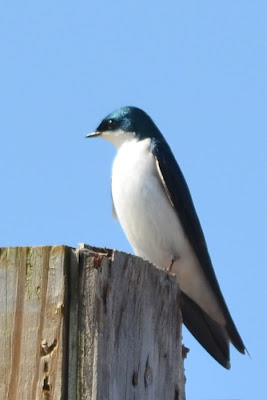 This Tree Swallow may only be just in, but photographer Joe Siekierski tells me that it was already laying claim to a box at the South Cape May Meadows and dusting up with the House Sparrows!
Posted by Mike Crewe at 10:31 AM