The Broad-tailed Hummingbird continues to show itself to visiting birdwatchers today and last night I was sent some more great pictures of the bird, so I'm sharing them here. All pictures are copyright of Michael O'Brien. 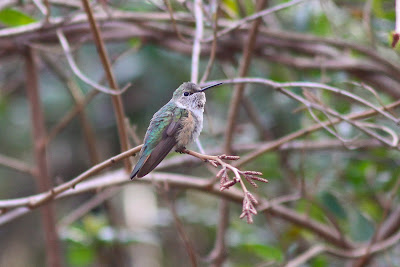 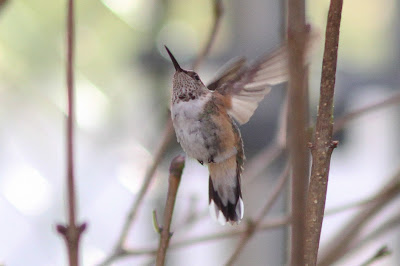 The two pictures above were taken on January 7th and making an interesting contrast with what the bird looks like now. Note the juvenile tail with extensive white tips. It's easy to be right with hindsight and we can ponder on those broad outer tail feathers that rule out Allen's Hummingbird, but the green feathers coming though on the chest sides are flashing before me in my nightmares now!! 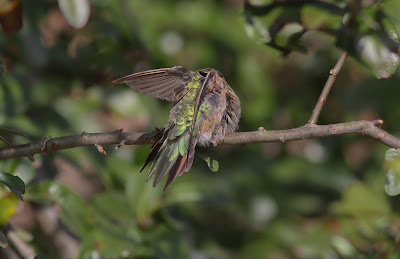 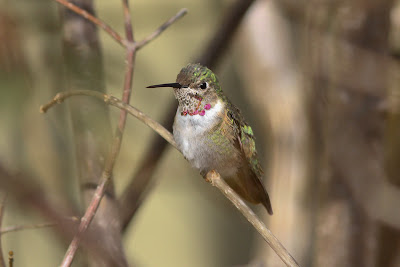 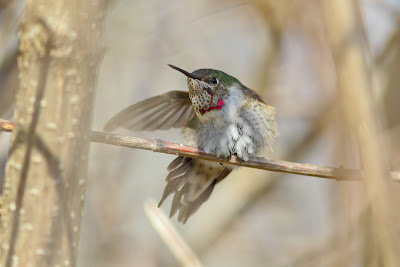 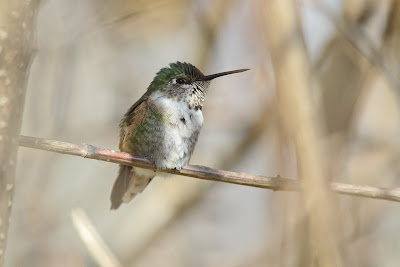 The above four pictures show the bird on March 1st. Even more green on the flanks, a rose-red tint to the throat feathers - and just look at that tail! As Michael O'Brien put "..a no-brainer" now!! [All photos by Michael O'Brien]
Other bird news.
If you are visitng this weekend, wrap up for some wet weather Saturday, but Sunday should be better. While you are here: the Western Grebe remains elusive but still present today off Sunset Beach/Alexander Avenue. According to tide (further north on in-coming, further south on out-going) it may be anywhere from St Mary's to the ferry terminal and usually anything up to a mile offshore (there's a lot of loons out there at the moment too!!). The Glossy Ibis is still at the South Cape May Meadows (Cove Pond end today), Lake Lily had Common Goldeneye and Redhead on Thursday, the Nashville Warbler was seen again at the state park near the small blind overlooking Lighthouse Pond. The Cackling Goose is still moving areound with Canada Geese, most recently on Shunpike Road near Stimpson Lane and two Horned Larks have been seen on the fields at the junction of Stevens and Broadway.

With apologies for the late update - I started this post exactly eight hours ago but life has been a bit hectic today!!
Posted by Mike Crewe at 5:53 PM