Of Wizards and Wise Men...

On Monday, March 26th, two men, two Cape May birders, put themselves on the map for two very different reasons. Both are either wizards or wise men - you can decide which (and bear in mind that they might be both for all I know!) Alan Brady made the news, for it was his 92nd birthday. Alan has been a mainstay of New Jersey birding for more years than I am sure he would care to remember and he is still a regular face at the Northwood Center store. His name appears on many a rare bird find in the New Jersey archives and he has spent countless hours at sea, photographing and researching seabirds. Many have learnt a lot from Alan so he is clearly a wise man, but he is a wizard too, since I saw him just a couple of weeks ago when he just happened to venture down to Cape May in time to see the Broad-tailed Hummingbird - a great skill if you can acquire it! Happy Birthday Alan!

Monday's other wizard-come-wise man is Pete Dunne. We all know that he's a wise man; we've all read the books, full of all those words of wisdom gathered over many years of personal experience. And Pete loves nothing more than being out there and passing on his knowledge to others. Indeed, that is exactly what he was doing on Monday morning when he had his wizard moment! Pete remarked that the weather looked perfect for a Swallow-tailed Kite... Surely not; not in March, it's much too early for such a thing! Years of wisdom or a wizard? You decide...

Birding round-up
Warren Cairo took up on Pete Dunne's words of wisdom and checked out Cape May Point after our monday morning Meadows walk - and stumbled straight on to a Swallow-tailed Kite!! The bird roamed  around as far as Stevens Street and The Beanery for almost exactly an hour before doing what they always do - disappearing into thin air. Another remarkably early event to go with all the others so far this year. 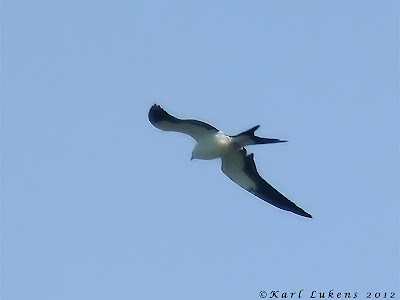 Magic Birding! A Swallow-tailed Kite against a pure blue sky - Cape May in March! [Photo by Karl Lukens]
Going all the way back to 21st, Karen and Brian Johnson reported two Whip-poor-wills calling at Jake's Landing Road and Brian reported a Yellow-throated Warbler back on territory at Bear Swamp, Cumberland County on 22nd. The following day I heard one singing at the Northwood Center but couldn't locate it before it moved on. Yellow-throated Warblers continued in the news with Tom Reed counting 24 singing birds around Belleplain on 24th and 108 Pine Warblers logged on the same route. Also in the news are Ospreys, with our very own Cape Island Creek birds back on their nest platform on 23rd and more being noted throughout the county daily. The CMBO Poor Man's Pelagic went off superbly despite the worry that fog would ruin the day. In the event, the weather cleared enough for participants to enjoy thousands and thousands of scoters out on the waters of Delaware Bay, while dozens of Northern Gannets fished in the wake of the ferry and a Tricolored Heron was added as a nice bonus. An American Bittern was reported by Tom McParland at Cox Hall Creek on the evening of 25th and the same day saw a flock of 22 Glossy Ibises flying over Cape May Point.

Also moving now - Golden-crowned Kinglets and Cedar Waxwings are plentiful out on the barrier islands it seems, though not so obvious around the point. I found plenty of both species out there on Sunday, including a flock of around 90 Cedar Waxwings in a Red Maple in the streets of Avalon. Male Boat-tailed Grackles are noisy and obvious as they sing and display to their partners out there at the moment too. A Common Yellowthroat was at Turkey Point, Cumberland County on 27th and a Common Goldeneye remains at Heislerville. Occasional reports of both Orange-crowned Warbler and Yellow-breasted Chat at the state park still filter through with the former currently last noted on 24th and the latter on 19th. A Blue-winged Warbler was reported from Belleplain SF on the exceptionally early date of 23rd and a Yellow Warbler was reported singing at Estell Manor Park on 24th. Both records await confirmation as fas as I know. Finally, a male Eurasian Wigeon is still hanging out at Corbin City impoundments. 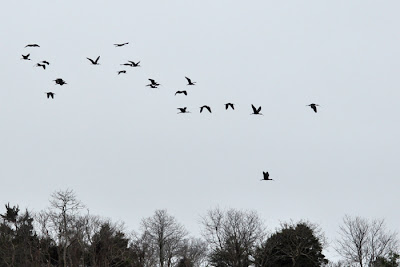 Migration under way - 22 Glossy Ibises winging their way over Cape May Point on Sunday [photo by Will Kerling]. 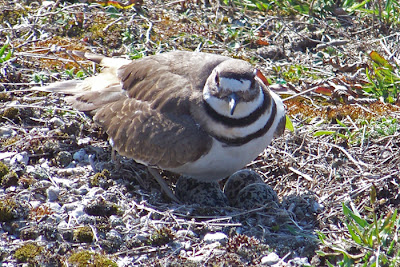 Wayne May sent me this picture of a Killdeer which was already settling down on four eggs at Smithville in Atlantic County on March 18th.
Posted by Mike Crewe at 1:50 PM