As of Monday, the Western Grebe was still keeping a little beyond decent viewing point - no news yet today but I'm guessing it's still around. It's very difficult to pin it down for anyone trying to see the bird; generally, on a falling tide it tends to drift out of the bay so is more likely to be seen around the end of the point from the St Mary's or St Peter's dune crossings. On an incoming tide, it can be as far north as the ferry terminal - as yet we have no reports from north of there. If you're not sure of the tide, or it's somewhere in between high and low, the best bet is probably to try Sunset Beach or Alexander Avenue.

The Broad-tailed Hummingbird continues to delight visitors to Batts Lane and, despite drawing much attention, doesn't seem to have changed its routine much. It still remains faithful to the same perches in the hydrangea or firethorn bushes either side of the gate to the right hand side of the house.

Other news this past couple of days headlines with an early return of Piping Plovers to New Jersey's beaches. Two were at the South Cape May beach on March 3rd, found by Warren Cairo and Claudia Burns, while Tom Wilson emailed me to report that one had returned to Absecon Inlet up in Atlantic County on 4th. American Oystercatchers are on the move too; although we get reasonable numbers wintering with us, many do head further south and there is a clear indication of movement right now with small parties being seen passing offshore or stopping off on the stone jetties around the point. Up to two Black-headed Gulls continue to visit Miami Beach at the north end of Villas and Dunlin, Bonaparte's Gulls and Forster's Terns can all be seen there in good numbers - probably best about an hour either side of high tide. The two male Blue-winged Teal (now looking very smart in breeding dress) continue in the state park, as does the Nashville Warbler this morning. One or two Eastern Phoebes have also been reported, though none seems to be hanging around for long; the latest was noted at Higbee Beach on March 4th by Don Freiday. 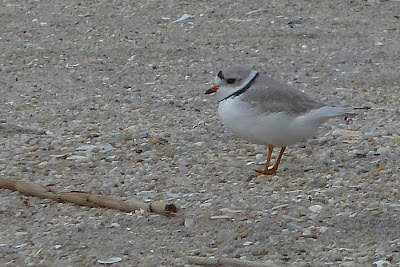 Piping Plover - one of two on South Cape May Beach, March 3rd [photo by Warren Cairo]. 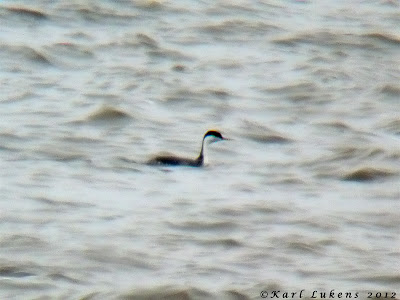 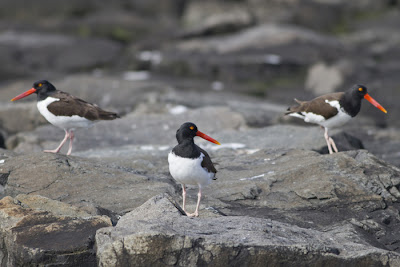 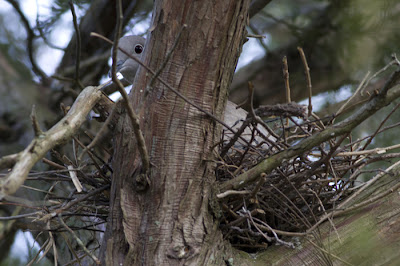 It's confirmed now! Eurasian Collared Dove on the nest at Cape May Point [photo by Sam Galick].
Posted by Mike Crewe at 11:52 AM