Bug of the week

It has been a good long while since an installment of this irregular feature here, but it is now bug season! In addition to the pesky ones now coming out (mosquitoes, ticks), there is an untold host of non-pesky, perfectly interesting critters becoming available for ogling. This week's bug is the Seven-spotted Ladybug (Coccinella septempunctata). 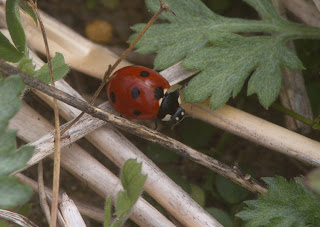 This wee beastie is seemingly everywhere right now, emerging from winter dormancy earlier in March. It derives its name from the seven spots on its elytra (singular, elytrum; English: wing covers), three on each, with the seventh at the top of the connection of the two elytra.

It is yet another import from the Old World (along with a host of plants, including the one in the background, Common Mugwort), being widely introduced as a control of aphids, a food source that both larvae and adult find most palatable. It is so widely introduced on this side of the Pond and so appreciated for its destruction of aphids, that it has been proclaimed as the state insect of six US states! Here in the New World, it may be out-competing native species of ladybugs. Conversely, there is some indication that it is being out-competed in Europe by an Asian introduction, the Harlequin Ladybug (Harmonia axyridis), a species that has also been introduced into North America.
Posted by Tony Leukering at 7:56 AM