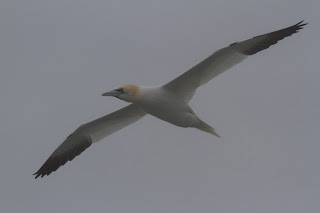 [All pictures are copyright Tony Leukering. Click on image(s) for larger version(s).]

After more than a week of fog-reduced visibility, we had some concerns for the effectiveness of the annual spring jaunt across Delaware Bay on the Cape May-Lewes ferry, this year on 24 March. Additionally, rain was in the forecast, and it had drizzled a bit before we all got to the ferry. But, the weather gods smiled on us, or, at least, didn't frown, and Karen Johnson, Janet Crawford, and I led an inveterate group of eight participants on what is probably my favorite annual CMBO field trip.

On a typical ferry crossing, the most-interesting events often occur in Delaware waters over the deeper channel carved by the Delaware River at much lower ocean levels. However, this time, most of the best birding was in Cape May waters. Things began with very poor looks at two Purple Sandpipers among six or so Dunlins flying from one jetty to the other that had the audacity to land on the wrong side of the jetty as we exited the Cape May Canal. However, whatever feelings might have been hurt by such rude shorebirds were quickly forgotten, as we shortly got into the best scoter show that I have ever witnessed from the ferry. In essence, Surf Scoters were nearly everywhere, sitting in groups of two to ten or so, and picking up and moving on as the ferry plowed its way south to Lewes. Though the participants could not discern the state line in the water, the scoters apparently could, as their abundance declined precipitously as we crossed into Delaware. We estimated that we had passed within sight of some 15,500 Surf Scoters, joined by fewer than 1000 Black Scoters.

Though bird numbers were considerably smaller in Delaware, the diversity was a bit higher. Four cormorants perched on the markers and isolated rocks were identified as probable Great Cormorants, based mostly on the fact that all cormorants that I've seen there previously at this season have been Greats. The two perimeter walls hosted a large number of Double-crested Cormorants, with two Great Cormorants seen better (not much, but some) than the ones on the more-isolated bits of rock. Karen picked out two Barn Swallows while most of the rest of us were still ogling cormorants. The nest on the tower on the harbor wall hosted two Ospreys and a third Osprey was seen in the vicinity. During lunch while sitting in the Lewes dock, some of us watched an east-bound flock of Brant, a single American Oystercatcher standing on the wall, and cavorting Buffleheads and Red-breasted Mergansers.

Our north-bound trip was a bit tame until a bit after crossing into New Jersey waters and passing the southbound ferry. As expected, the Northern Gannets following that ferry crossed over to ours to hitch a ride on our ferry's slipstream back to the north. However, unlike on our southbound leg, Northern Gannets kept arriving from points east and west until we had our second spectacle of the day, and the one that I usually expect in spring. 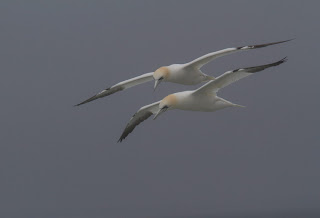 At some point, the ferry passed into the mother lode of baitfish, and Northern Gannets started diving into the wake after them. 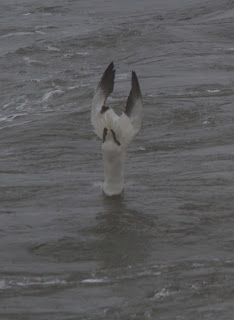 Of course, once one has a suitable number of gannets behind the boat, they start talking to each other anytime there is a fish in the offing. And, of course, once that starts happening, even more gannets begin arriving to take advantage of the feast. Can you discern the nine Northern Gannets in this picture, even though some of them are not visible? 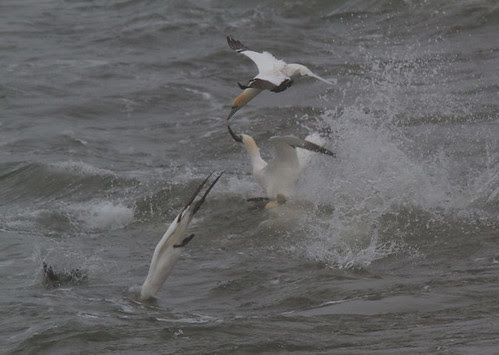 I don't know that any of us spent any significant time on the rest of the crossing looking at anything other than the gannet spectacle. 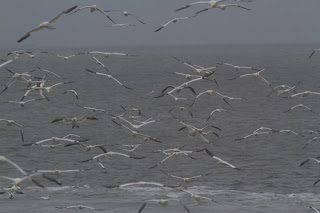 All good things come to an end, and too soon, our trip was over. However, during our entrance into the Cape May Canal, we finally scored Bonaparte's Gull and Forster's Tern, nine of the former exiting the canal past us, and one of the latter standing on the beach to the north of the north jetty. Checking the weather radar on my phone after getting to the dock, we could see the next band of showers coming north up the Bay, the same band that we could look up from the phone and see by looking south. Great timing!

Posted by Tony Leukering at 8:37 PM