The weather is certainly topsy turvy at the moment; after posting my recent piece on finding American Woodcock and Wilson's Snipe during freezing weather, we had 48 hours of thawing and it seemed that my advice was going to be far less than timely. However, the last 48 hours have seen a return to the big freeze as some fiercesome weather blew up from the south and eventually dumped a fresh batch of snow on us. This up and down situation seems to have caused most birds to hunker down and sit tight, so not much new seems to be happening in the bird world around Cape May right now - though Tom Reed had the foresight to check out Sunset Beach on the morning of January 31st and scored a Harlequin Duck and five Razorbills heading out of the bay. Of great interest, Chip Krilowicz reported a Caspian Tern at Jake's Landing on February 1st - a real vagrant at this time of year as this species generally winters down around the Gulf of Mexico. However, at least three sight reports have been submitted to eBird from North Carolina so this may well be yet another bird to be taking advantage of the generally mild winter we are having.

Still, you could do a lot worse than come down to Cape May - we still have a great selection of waterfowl on offer, while feeder birds are pretty good right now (he says as he casts one eye over the White-breasted and Red-breasted Nuthatches, Fox Sparrows, Purple Finches and so much more at the Northwood Center feeders!). 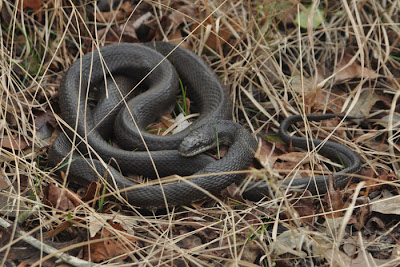 It may be snowy out there right now, but overall it's been a notably mild winter here and perhaps this helps to prove it. Will Kerling found this Black Rat Snake out and about on January 30th on the Woodcock Trail section of the Cape May NWR. This species occasionally gets reported in the winter and it never ceases to amaze how such cold-blooded species can be mobile in such chilly conditions. Next month will be the start of the salamander season! [Photo by Will Kerling] 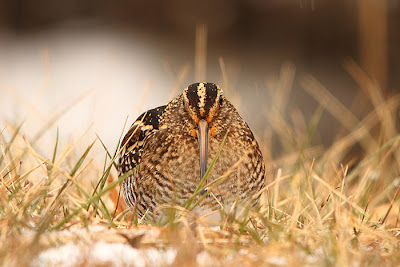 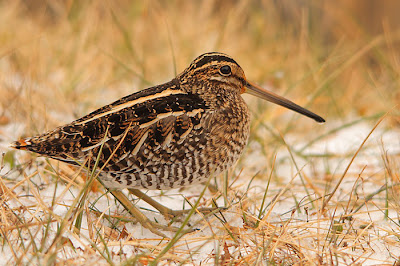 Right at the very time I was putting together my 'search image' post, Jeff Kiger was emailing me these great pictures of a Wilson's Snipe at Pennsville, Salem County. As Jeff told me, when you have a 500mm lens, you can still get great shots even from right across the other side of the road! 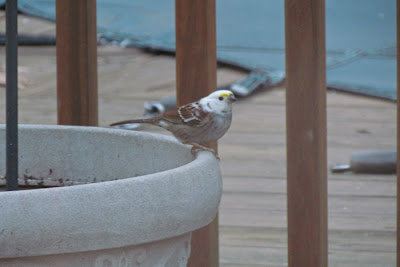 If you can't get out because of the weather, a fully-furnished feeding station in your yard and a handy window can still give you hours of pleasure - and the chance of a surprise or two. Steve in Cape May Court House sent us this picture of a leucistic White-throated Sparrow in his yard recently. This bird has a lack of color pigment in some of its feathers - a genetic defect known as leucism, which may affect anything from all the feathers to just one or two. What is interesting with this bird is that, though most of the head is all white, the bright yellow patch remains in front of the eye. 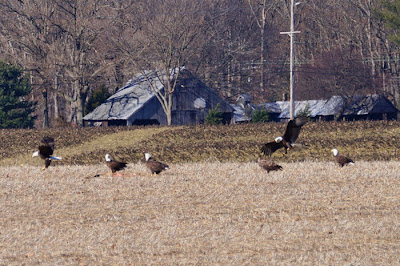 Many people have been out looking for Crested Caracaras lately and it seems that the trail has currently gone cold. However, scouring the countryside can result in some great chance encounters, such as this gathering of no less than six Bald Eagles in a field in Salem County. This great sight is a timely reminder that the fabulous, annual Cumberland County Winter Eagle Festival is coming up next Saturday, February 9th. There's a great program of indoor events and outdoor raptor viewing laid on throughout the day, so do come along and say hello, we'll all be there! [Photo by Jeff White]